This academic year, the Philological Faculty of the Al-Farabi Kazakh National University is implementing the "Professor's Hour" project, within which well-known scholars, high-qualified specialists in their field deliver lectures on topical problems and share their opinions. Today, the Department of Kazakh Linguistics organized the professor’s lecture on the topic "The problem of the national language in the paradigm of modern education."

The lecturer, Tymbolova Altynai Orazbekovna is a Doctor of Philology, Professor, and a scholar who is engaged in the study of lexicology, phraseology, linguopoetics, methods, relations between language and culture. She is the best teacher of the university. Thanks to her professional activity, today Altynai Orazbekovna presented such an important topic for discussion to the scientific community. In the introductory part of the lecture, the lecturer spoke about the change in the industrial and socio-political paradigm. This paradigm has a direct impact on today's education system. The situation of the Fourth Industrial Revolution, which Elbasy said about, is the defining process of the content of the educational paradigm. “Today humanity is mastering the world not by the power of the hand, but by the power of reason,” the lecturer noted. In her lecture, Professor Tymbolova Altynai Orazbekovna carried out a detailed analysis of the concept of "Smart" in the modern education system and gave a definition of its constituent units. Based on Smart plans, it was clearly defined what results education will give.

“Are we educating a smart generation to build a smart / smart / society? Today, when globalization is underway, does our generation realize national values? What is the state of the national language? At what level are the features of artistic thinking and language culture in the national consciousness of young people? " - the lecturer answered such difficult questions and suggested several ways to solve these problems.

In addition, Altynai Orazbekovna paid a special attention to the upbringing of the alpha generation. Based on comparative data, Altynai Orazbekovna emphasized the importance of the national language in the upbringing of the future generation and said that it takes its beginning with the family. Based on the works of the famous philosopher, J. Piaget, Japanese entrepreneur, Masaru Ibuki, she analyzed the function of the national language in the shaping of of children's consciousness.

Altynai Orazbekovna's professor’s lecture encompassed all main aspects of the given problem and discussed the most burning issues of the modern education paradigm. So, during the lecture, the issues of the development of speech and aesthetic consciousness, oratory, apato-abulism, etc. were discussed. These issues are closely related and should be considered within the framework of sociology, pedagogy, methodology, linguistics. Guided by the scientific and pedagogical conclusions of Akhmet Baitursynov, the lecturer said about the development of modern reading literacy. According to the international PISA survey statistics, our students' reading literacy rates are not so good. Having studied the causes and consequences, Altynai Orazbekovna emphasized that that new goals and objectives should be established. At the end of the lecture, the participants asked questions and received answers to their questions. Professors G. Smagulova, A. Zhunisbek, Z. Kuzekova and scholars from near and far abroad highly appreciated the value of the lecture and expressed their warm wishes. 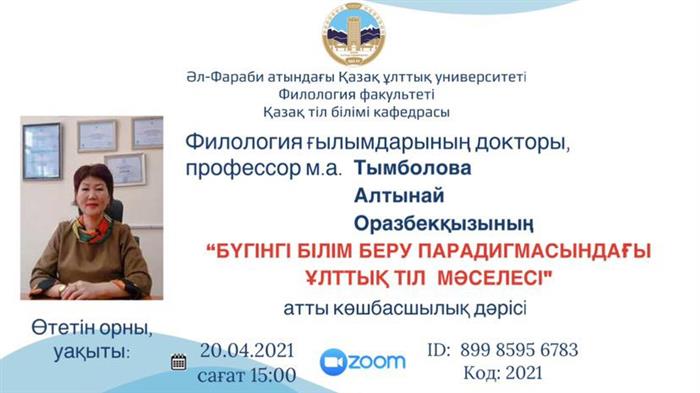