On May 6 at 15:00 in honour of the 30th anniversary of Independence of the Republic of Kazakhstan the Department of Kazakh Linguistics of the Faculty of Philology of Al-Farabi Kazakh National University hosted an online lecture on the topic: "Independence and the state language" delivered by Doctor of Philological Sciences, Professor Salkynbay Anar Bekmyrzakyzy.

Anar Bekmyrzakyzy began her speech by congratulating the participants on the 30th anniversary of our independence. She focused on Kazakh history, analyzed the past and present of the Kazakh national composition, the Kazakh language, including Kazakh writing and language policy. The scholar said that we should take into account past experiences and speak Kazakh everywhere at all times. She spoke about the achievements of the state language of the Republic of Kazakhstan – the Kazakh language for 30 years. 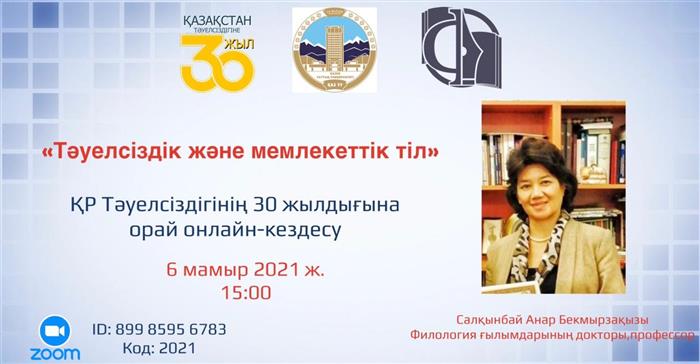