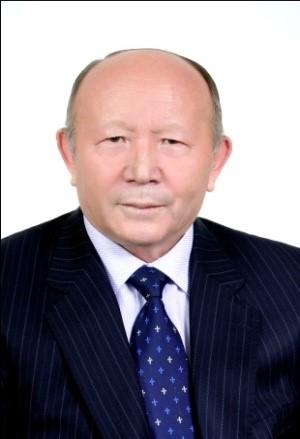 Doctor of Physical and Mathematical Sciences

In 1969 he graduated from Novosibirsk State University.

In 1972 he graduated from the Institute of Mathematics of the Siberian Branch of the USSR Academy of Sciences.

In 1973 he defended his thesis at the Lomonosov Moscow State University.

From 1985 to 1991 - Head of the Department and Dean of the Faculty of Mathematics of the Kazakh State University named after S.M. Kirov, Chairman of the Specialized Regional Dissertation Council (Kazakhstan and Central Asia).

In 1989 he opened the first in Kazakhstan department of functional analysis and probability theory at the Kazakh State University, where he headed it, and in the same year he was elected a corresponding member of the Academy of Sciences of the Kazakh SSR.

In 1991 he was appointed rector of the Kazakh Institute of Chemical Technology in Shymkent.

From 1992 to 1996, T.Sh.Kalmenov was the rector of the Kazakh Institute of Chemical Technology, a member of the bureau of the Southern Branch of the Academy of Sciences of the Republic of Kazakhstan and deputy chairman.

From 1998 to 2003 he worked as the head of the department at the South Kazakhstan State University.

From 2002 to 2004 he headed the dissertation council on differential equations and equations of mathematical physics.

In 2004 he was appointed General Director of the Center for Physical and Mathematical Research of the Ministry of Education of the Republic of Kazakhstan.

In 2019 he headed the Department of Differential Equations of the Institute of Mathematics and Mathematical Modeling.

In 1978 he was awarded the Lenin Komsomol Prize.

In 1996 he was awarded the title of "Honored Worker of Science and Technology of the Republic of Kazakhstan".

In 2013 he was awarded the State Prize of the Republic of Kazakhstan in the field of science and technology for the series of works "Theory of initial-boundary value problems for differential equations".

In the works of T.Sh.Kalmenov, for the first time, the boundary conditions of Newton's volume potential were found. As is known, these conditions describe the effect of "transparent boundary conditions", which is very important in theoretical physics. They transmit easterly waves and represent incoming waves. It is shown that the existence of such a bulk potential boundary condition can be taken into account on a finite area of ​​an infinite region with Sommerfeld type radiation conditions and can be efficiently solved by numerical methods. Then these results were developed for thermal and wave potentials, for the Helmholtz equation and equations of mixed type, and also for non-cylindrical regions. In the works of his students and followers, the spectral theory of the volume potential was developed, which makes it possible to achieve new results. At the same time, the development of the spectral geometry of the three-dimensional potential is based on a new direction. T.Sh. Most of Kalmenov's research is devoted to integral operators and operators derived from boundary value problems. T.Sh. A characteristic feature of Kalmenov's mathematical work is his resourcefulness in solving mathematical problems and the abundance of rational approaches. In the theory of equations of mathematical physics, for example, in the theory of elasticity, it is very important to clearly express the solution of problems for inhomogeneous bharmonic equations. T.Sh. Kalmenov was the first to create the polyharmonic Green's function of the Dirichlet problem in any dimensional sphere of space (in terms of elementary functions). Academician T.Sh. More than 60 master's and master's theses, 11 doctoral dissertations have been defended under Kalmenov's supervision. He has more than 150 scientific papers, most of which are published in international mathematical journals. 14 of them were published in the journal Doklady AN SSSR/Doklady AN SSSR. Only in the last 5 years (2016-2020) has published more than 30 scientific articles in scientific journals indexed on the basis of Web of Science. Academician T.Sh. Kalmenov, as a world-class scientist and a great teacher, as an experienced leader, makes great demands on himself and other scientists. This helps to maintain the level of mathematical science in Kazakhstan at the highest world level. Currently T.Sh. Kalmenov is one of the brightest mathematicians in Kazakhstan and the main leader. T.Sh. Kalmenov is engaged in fruitful and effective scientific work with indomitable energy, generously sharing scientific ideas with students and colleagues, as well as introducing new creative ideas, solving world mathematical problems.