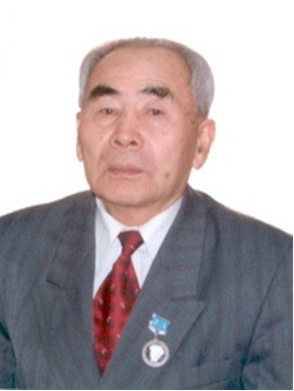 Candidate of Physical and Mathematical Sciences

Ni Valentin Khaksunovich was born on December 12, 1927 in the village of Posyet, Posyetsky district of Primorsky Krai.

In 1947 he graduated from high school

In 1952 he graduated with honors from the Faculty of Physics and Mathematics of Kazakh State University named after S.M. Kirov.

In 1998 he was awarded the title of professor of KazNU named after Al-Farabi.

In 1946 elections were held for the Supreme Soviet of the USSR, and Ni Valentin, as secretary, organized this event.

From 1994 to 2009 he worked as an associate professor and professor at the Department of Mathematical Analysis.

In 1984 - a diploma of the Supreme Council of the Kazakh SSR.

In 1987 - the badge "Excellent student of the higher school of the USSR."

Valentin Ni took an active part in the social life of the faculty. He repeatedly replaced the duties of vice-rectors, was a member and secretary of the party bureau of the Faculty of Mechanics and Mathematics, a member of the trade union committee, and academic councils. Valentin Khaksunovich was elected the executive secretary of the university's admission committee six times, served as chairman of many university commissions for checking various departments. Being himself from a simple family, in his work with students he was very sensitive and sympathetic to those who came to study from the provinces. He helped them, was the first to arrange them in a hostel and monitored their progress. And if he noticed a lot of omissions, he found free time and personally carried out the work. Valentin Khaksunovich maintains good relations with many of his graduates to this day. He is a regular guest of honor at the annual alumni reunion. Now many of his students have become successful scientists, teachers and work with him.