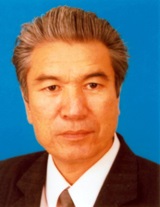 Murzabekov Zainel Nugmanovich graduated from the Faculty of Mechanics and Mathematics of the Kazakh State University named after S.M. Kirov in 1971 with a degree in Mathematics. From 1971 to 1973 he served in the Soviet Army. Since 1973, he has been working at the Al-Farabi Kazakh National University.

In 1982 he defended his thesis for the award of the degree of Candidate of Physical and Mathematical Sciences on the topic “Stability and quasi–optimal control of mechanical systems with distributed parameters”, specialty 01.02.01 - theoretical mechanics.

In 2008, he defended his thesis for the award of the degree of Doctor of Technical Sciences on the topic “Synthesis of controlled systems described by ordinary differential and linear hyperbolic equations”, specialty 05.13.18 – mathematical modeling, numerical methods and software packages.