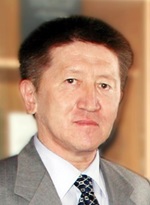 Doctor of Physical and Mathematical Sciences, thesis topic: "The method of fictitious domains for hydrodynamic problems with inhomogeneous boundary conditions" (2001);
Professor;
Academician of the Engineering Academy of the Republic of Kazakhstan (2003)

Trainee researcher, post-graduate student of the VC SB Academy of Sciences of the USSR (1974-1979);

Member of the Board of Directors of the Joint-Stock company "Kazakh Academy of Transport and Communications named after M. Tynyshpaev" (22.02.2013)

Member of the Board of Directors of the joint-Stock Company "Center for International Programs" (until 16.01.2014)

At Al-Farabi Kazakh National University he lectured on the general course "Numerical Methods", as well as a number of special courses in computational mathematics. He was the head of a scientific project funded by the Ministry of Education and Science of the Republic of Kazakhstan, carried out intensive work on improving the educational process, activating scientific work, broad involvement of students in research work, the introduction of an international quality management system at the university, credit technology training.

Under his leadership, work is being carried out on the development of computer technologies for managing geophysical research. The object of research is the methods of electrical exploration. The use of mathematical modeling methods of vertical electric sensing (VEZ) technology allows us to obtain substantially accurate characteristics of oil and gas deposits.