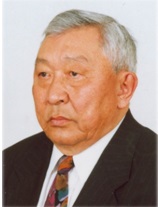 worked as dean of the Faculty of Mechanics and Mathematics from 1971 to 1975,

In 1927 he was born in the village of Kizil, East Kazakhstan region

Since 1945 he began to continue his studies at school.

In 1948 he graduated from secondary school No. 11 of the city of Semipalatinsk with a gold medal.

In 1955 he graduated from the Moscow State University. M.V. Lomonosov

In 1964 he graduated from the postgraduate course of the Kazakh State University named after. S.M. Kirova

In 1986 he graduated from the course of the field of mastering computer technology ES-ECM I022, Iskra-I256 KazGU.

In 1977 he graduated from the Evening University of Marxism-Leninism at KazGU.

Outside of studies, he worked as a teacher of mathematics, physics at the secondary school 5 of the city of Zhana-Semey. Also, the inspector of the Ulan district

In 1984-1985  performed educational, methodological, educational, scientific and social work in the position of acting. professor of the department.