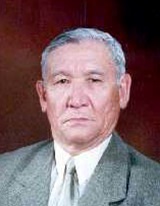 Doctor of Physical and Mathematical Sciences

In 1960 he graduated from Kazakh State University named after. S.M. Kirov

In 1963 he graduated from the graduate school of KazGU S.M. Kirov

In 1960 - 1996 he worked as a graduate student, assistant, senior lecturer, associate professor, head of the Department of Mathematical Physics of the Kazakh National University.

Since 1996 Professor of the Department of Differential Equations and Mathematical Physics, Dean of the Junior Department, Head of the Master's program.

Awarded with several medals. He is the author of 110 scientific papers, including 83 scientific articles and 1 monograph.