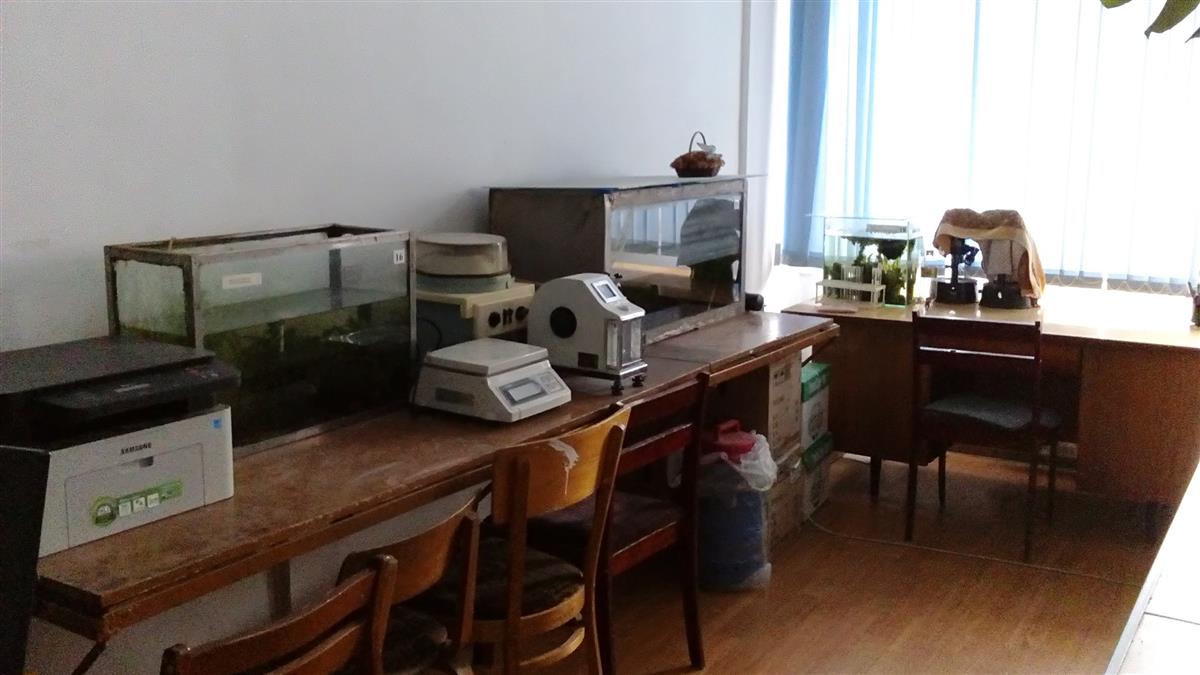 Research Institute of Biology and Biotechnology,

Department of Biodiversity and Bioresources

Faculty of Biology and Biotechnology KazNU named after Al-Farabi

The main areas of research:

1. Systematics and evolution of animals

2. Preservation of the natural diversity of animals

3. Adaptations of animals under conditions of increasing anthropogenic load

STUDY OF THE DIVERSITY OF COMMUNITIES AND THE STATUS OF FISH POPULATIONS UNDER THE CONDITIONS OF THE FLUENTING ENVIRONMENT:

Results: The hydrological regime of water bodies is one of the main factors of fluctuations in the fish habitat; anthropogenic pollution by industrial, agricultural or household wastes acts as additional sources for specific water bodies.

The existence of indigenous species, the spotted gubach and the Turkestan sculpin, has been proved in the Syrdarya basin. In the spatio-temporal aspect, the Aral Shemai experienced a change in most morphological indicators. The appearance in the Aral roach population of individuals with new sets of countable characters indicates the effect of disruptive selection in the Syrdarya River.

In the river basins of the Syr Darya, Shu and Balkash basin, the structure of the populations of commercial fish — carp, roach, and snakehead — consists of individuals of different ages, which indicates favorable conditions for their reproduction.

On the example of the Balkhash marinka from the Karatal river, it is shown that in the rivers of the Balkash basin indigenous species can experience significant negative anthropogenic impact, which leads to their rapid elimination from the composition of the ichthyofauna. The great morphobiological plasticity of naked osman and spotted gubach has been established, which allows these species to adapt to fluctuating environmental conditions and remain the dominant species of ichthyofauna in many rivers of the Balkash basin.

A study of the morphological variability of sabrefish and roach, which are currently the dominant species in the fish community, revealed a great plasticity of the populations of these species, allowing it to easily adapt to changing environmental conditions.

The reduction in the age range in the roach population in the Syr Darya river can be associated both with fishing and with an unfavorable state of the environment. Histological analysis revealed pathologies in all pike detoxification systems from the middle section of the Syrdarya River.

In the variety of fish r. Aksu and r. Leps is dominated by alien species, indicating a radical restructuring of the ichthyofauna of these rivers. Based on the morphological analysis of mustard from the river. Ile belongs to the species R. ocellatus.

The first results obtained allow us to consider the Semirechye minnow, the Balkhash marinka, Turkestan gudgeon and Aral pinch as promising objects for decorative fish farming.

The study is in line with the current direction of scientific work aimed at solving the problem of the origin and dynamics of biological diversity under conditions of anthropogenesis. The information obtained can be used to prevent damage from loss of ecosystem services, biological invasions and save money on the conservation of natural biological diversity in situ. 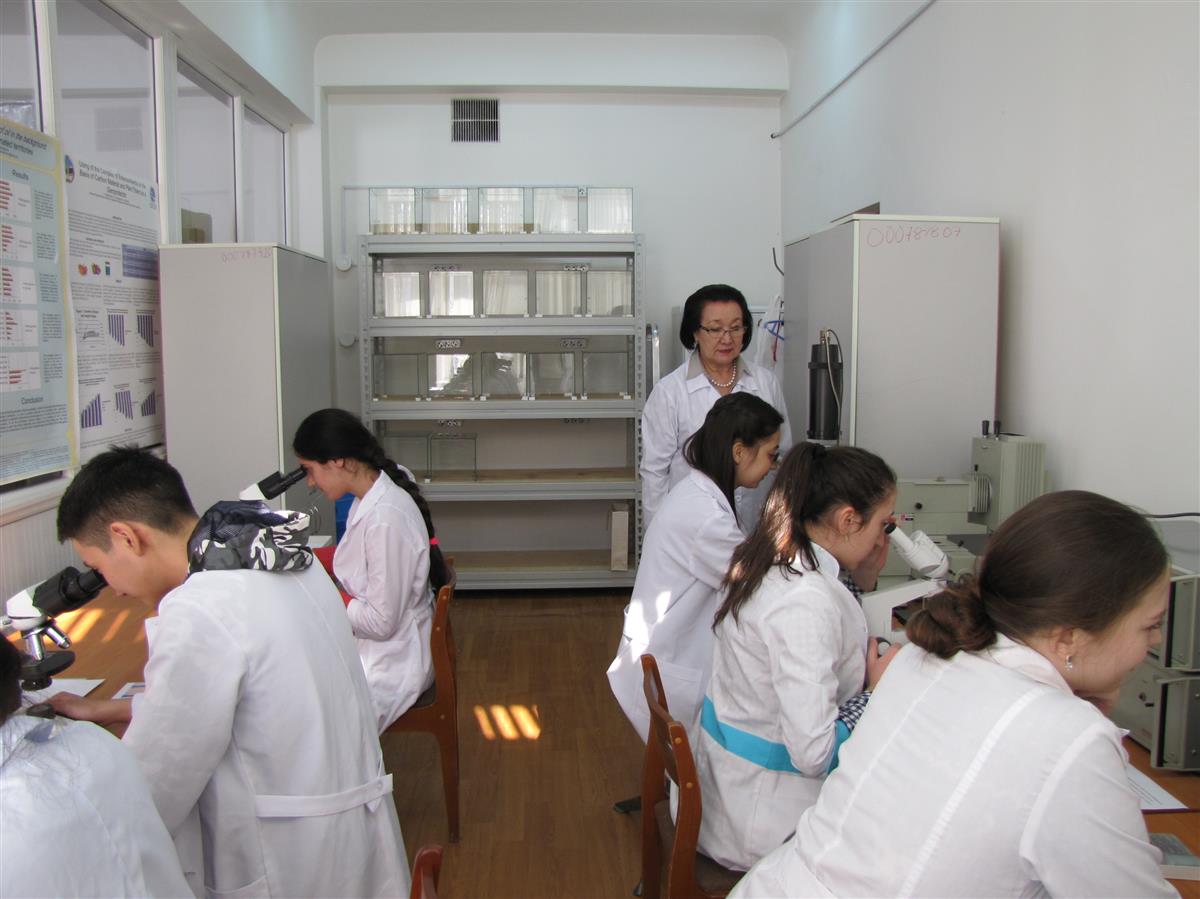 The main areas of scientific activity of the laboratory

- study of the toxic and genotoxic effects of environmental pollutants (OS) on biota;

- search for biomarkers of the cytotoxic effect of pollutants;

- search and development of protective substances for the toxic and genotoxic effects of environmental pollutants (OS) on biota, geroprotectors;

- determination of the environmental risk of exposure to negative OS factors.

Currently, work is underway to study the cyto- and embryotoxic effect of water and sediments of Lake Balkash on fish and amphibians. A comprehensive biotesting of water and bottom sediments of the lake. Balkash on embryos and juveniles of such test objects as zebrafish (Danio rerio) and Spur frog (Xenopus laevis), as well as on background species of commercial and non-commercial fish: asp (Aspius aspius), roach (Rutilus rutilus), and mustard (Rhodeus ocellat) ) and background species of amphibians: lake frog (Rana ridibunda) and green toad (Bufo viridis). Biotesting methods detect the level of mortality of embryos, the frequency of developmental disorders. Using biochemical and cytological methods, the mechanisms of the cyto- and embryotoxic effects of the waters and sediments contaminated with heavy metals are studied. Balkash on juvenile background species of fish and amphibians.

Name of workshops / specializations conducted in the laboratory indicating the equipment used: 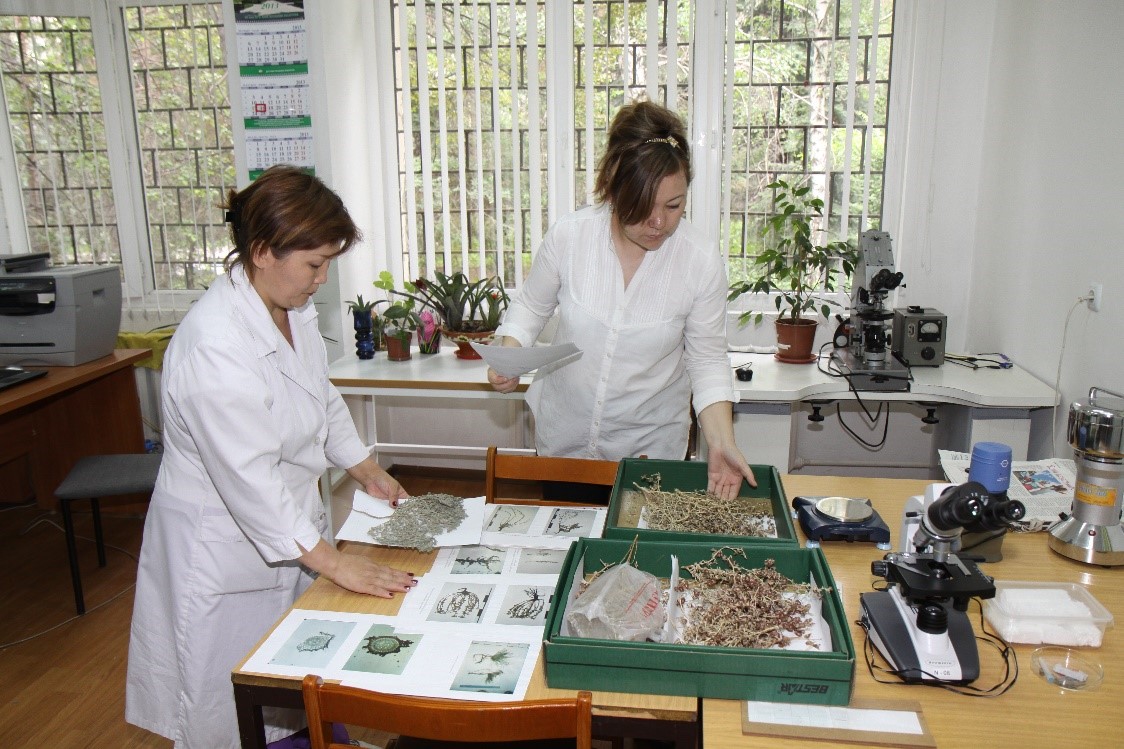 * Fundamental and methodological foundations of monitoring

* * Development of effective methods and technologies for improving the human, animal and plant habitat, including bioindication of pollutants and phytoremediation of anthropogenic disturbed areas.

* bioindication of plant objects and phytoremediation of contaminated areas;

* production of anatomical preparations of vegetative organs of plants;

* identification of indicator signs and plants that can accumulate xenobiotics;

* study of structural and ecological mechanisms of adaptation of plant organisms;

* study of the structural and environmental mechanisms of xenobiotics impact on the plant organism and development of ways to reduce their accumulation in plants.

3. Directions of scientific and applied research

* Development of basic techniques for biological treatment of soils contaminated with xenobiotics:

* Determination of structural and environmental properties of plant tolerance to identify the main mechanisms of xenobiotics localization in plants.

* Assessment of the range of tolerance and adaptability of plants as a basis for bioindication of soil contamination with xenobiotics.

* Study of the role of natural radiation background, natural radionuclides and heavy metals in the life of plant organisms

* Study of problems of ecological morphology of plants, development of the theory of plant adaptability to adverse anthropogenic environmental factors.

* Conducting cell monitoring of the current state of the environmental situation.