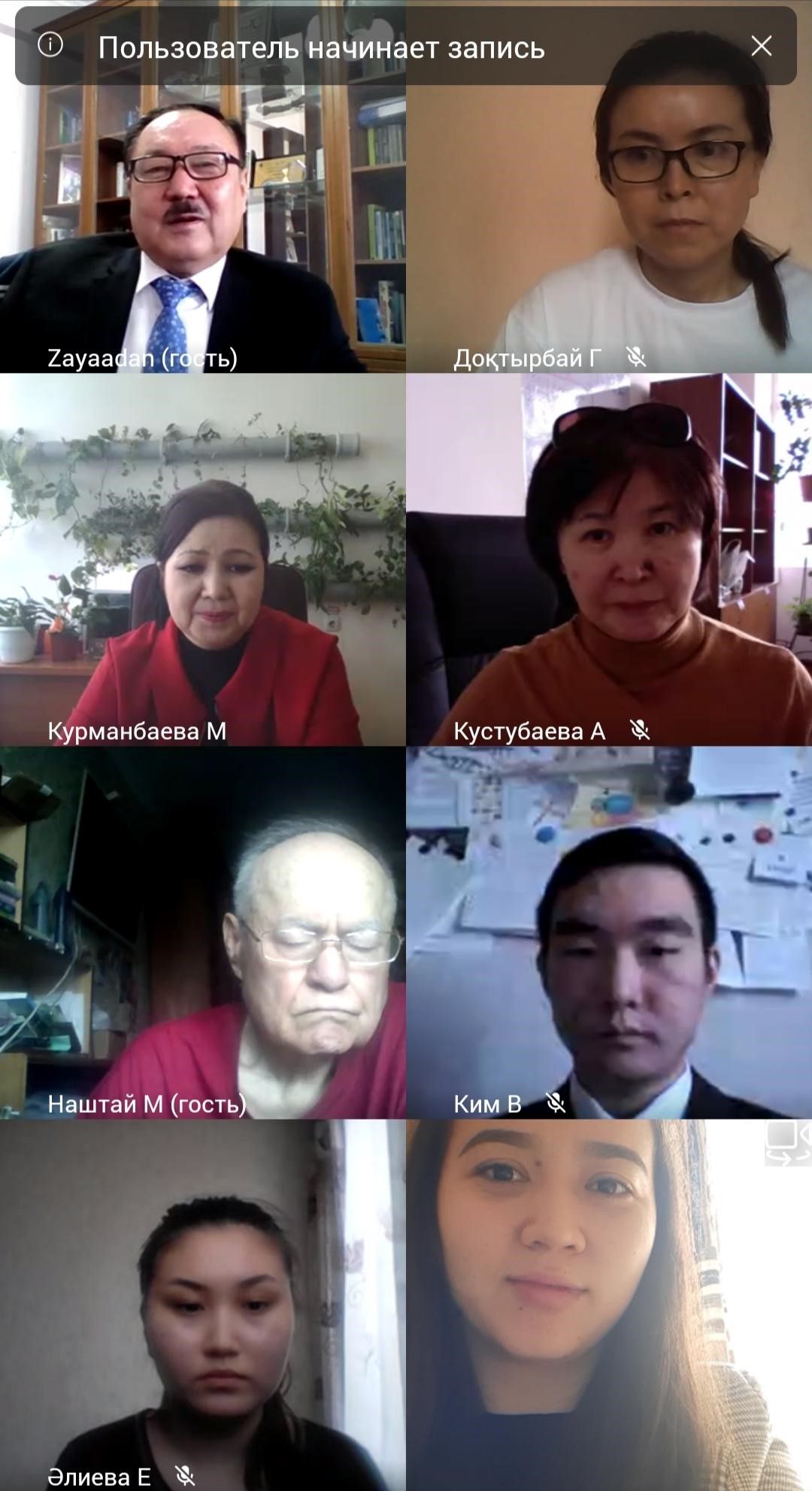 April 7 at the Faculty of Biology and Biotechnology KazNU named after Al-Farabi hosted the International Conference of Students and Young Scientists "Farabi Alemi". At the opening of the conference spoke the dean of the Faculty of Biology and Biotechnology Doctor of Biological Sciences, Professor, an academician of the National Academy of Sciences of the Republic of Kazakhstan Zayadan Bolatkhan Kazykhanovich. Then the reports were delivered in sections. 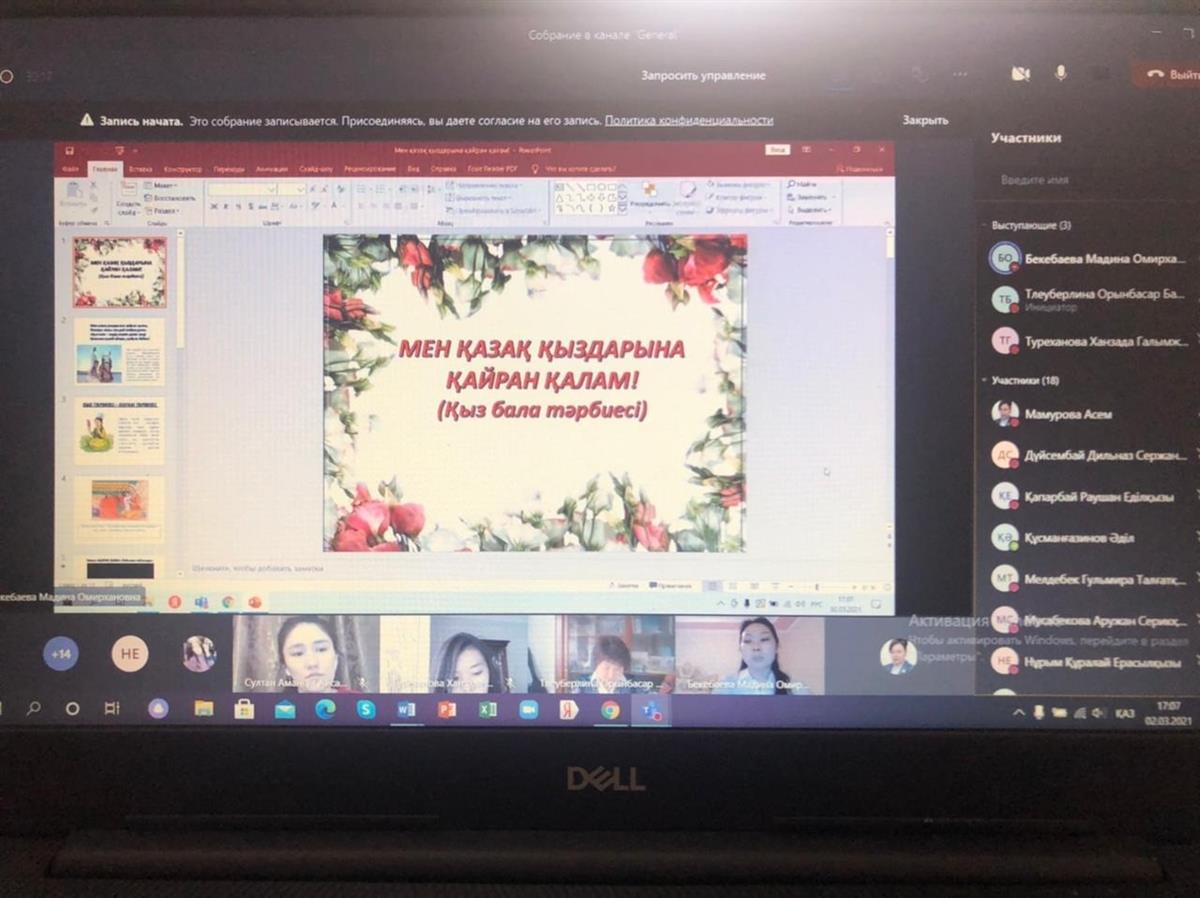 Faculty of Biology and Biotechnology, Department of Biodiversity and Bioresources, 1st year doctoral students of Geobotany O.B. Tleuberlina and Bekebaeva M.O. On March 2, we held an online educational event dedicated to the spring holiday and International Women's Day on March 8. Educational lesson "Мен қазақ қыздарына қайран қалам" was dedicated to our dear mothers, grandmothers. The events addressed the issues of educating Kazakh girls today, how a modern Kazakh girl should look, hair care, face care. The main attention was paid to the upbringing of the Kazakh girl. The event was attended by methodologists of the faculty, teachers of the department, teachers of the department of pedagogy, doctoral students and students. Also, during the event, issues of how a modern Kazakh girl should look like were discussed. The educational event was held at a very high level. 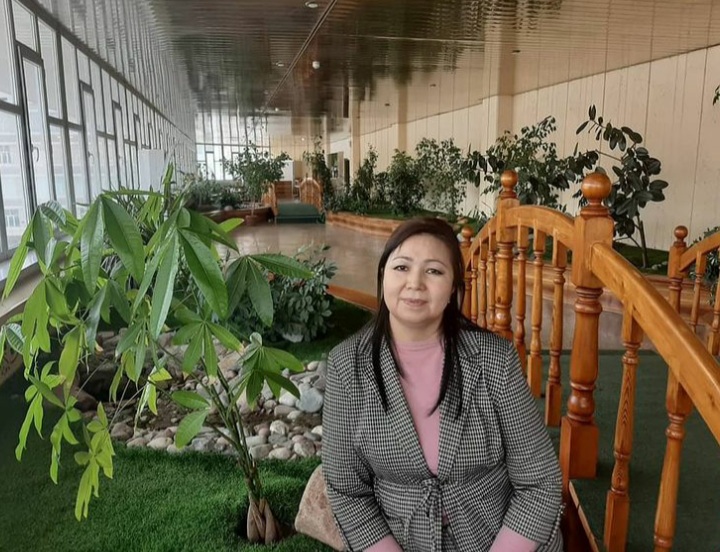 In honor of the 27th anniversary of Independence of the Republic of Kazakhstan, a winter garden for students and teachers of the university was opened at Al-Farabi Kazakh National University in 2018. The team headed by the head of the Department of Biodiversity and Bioresources, M. S. Kurmanbayeva, took part in the creation of the winter garden, which today cooperates with extensive experience in creating a beautiful garden. The head of the department visited the winter garden and got acquainted with the conditions of the garden. Young specialists and teachers shared their plans for the future, said that they would contribute to the improvement of the garden. 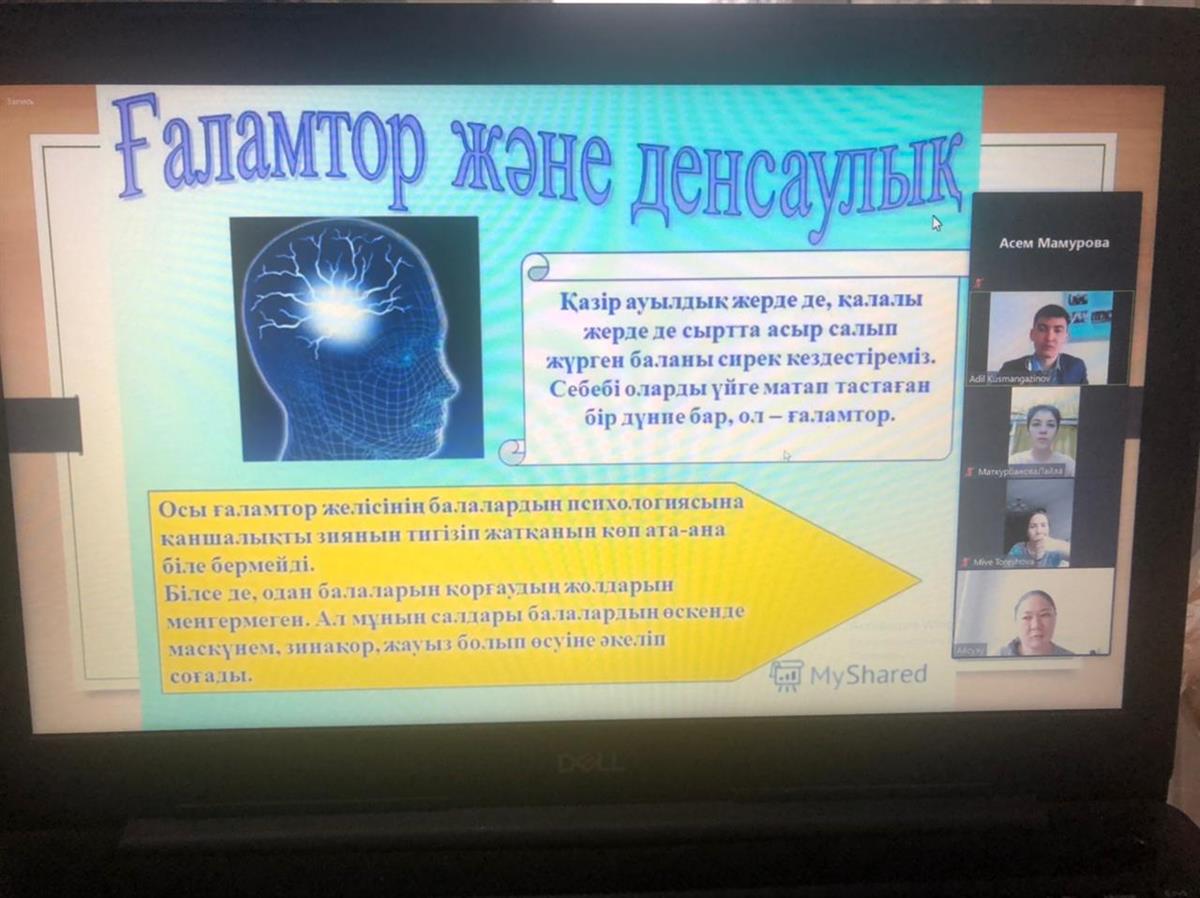 "The Internet, its benefits and harm"

1st year doctoral students of the specialty "8D05108-Geobotany" of the Department of Biodiversity and Bioresources of the Faculty of Biology and Biotechnology of the Al-Farabi Kazakh National University Kusmangazinov Adil and Sarkytbaeva Aisulu held an online educational event on the topic "The Internet, its benefits and harm" on April 01. The event was attended by teachers of the Department of Biodiversity and Bioresources, teachers of the Department of Pedagogy, doctoral students and foreign students of the groups 19-09 and 19-10. During the event, information about the Internet was presented. In addition, in the form of presentations and videos, the benefits and harms of the Internet, the impact of the Internet on human life, as well as interesting facts about the Internet were shown. At the final stage of the event, questions were asked about the Internet, students actively participated and answered them. The educational event was held at a high level. Practice leaders: Senior lecturer Aldasugurova Ch. Zh., Doctor of Biological Sciences, Professor Kurmanbayeva M. S. 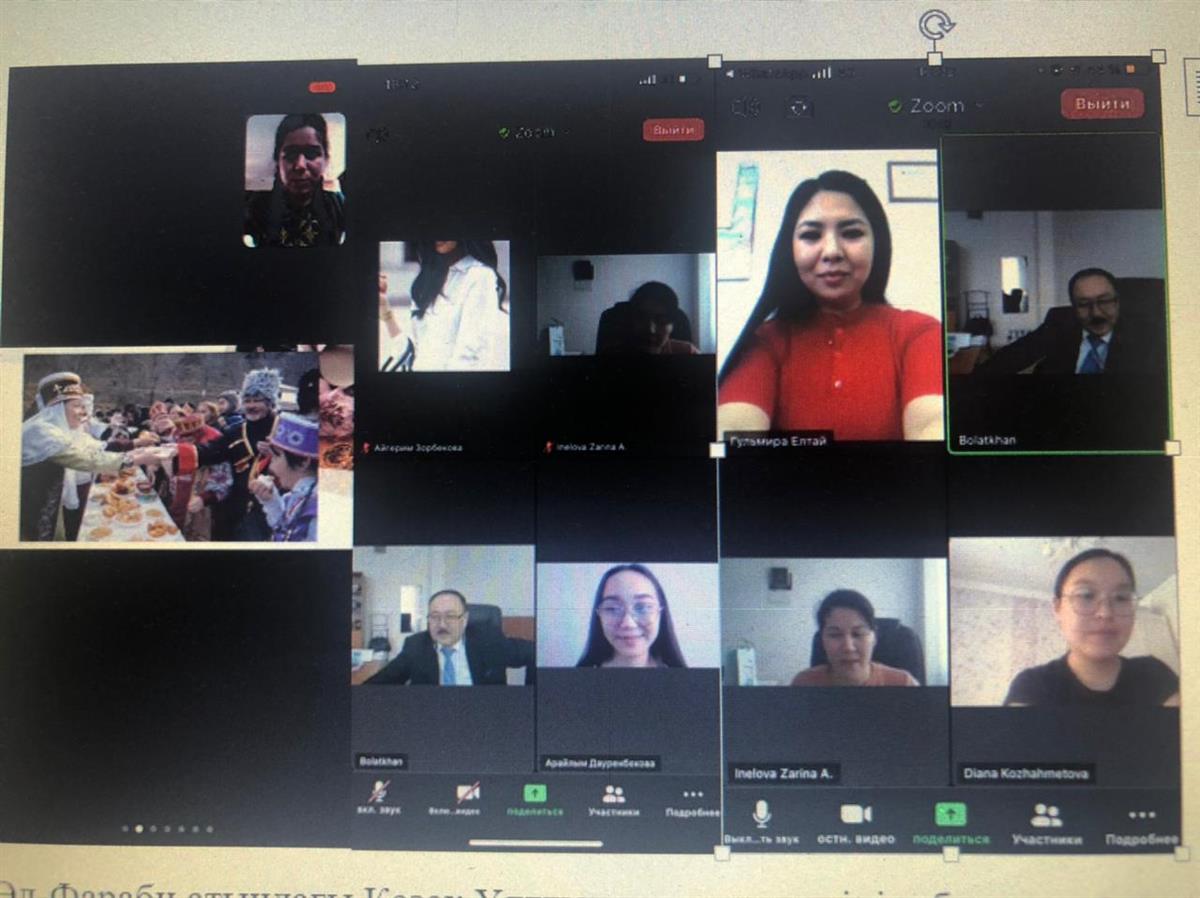 A meeting was held with students of the specialty “6b05102 Biology " with the participation of the dean and deputy deans, senior curator-adviser of the Al-Farabi Kazakh National University, Faculty of Biology and Biotechnology.

The meeting began with a concert program of students and continued with a congratulatory speech by the dean of the faculty – Zayadan Bolatkhan Kazykhanuly. During the concert program, students from Kazakhstan and abroad made sincere congratulations, performed kui, and read poems. 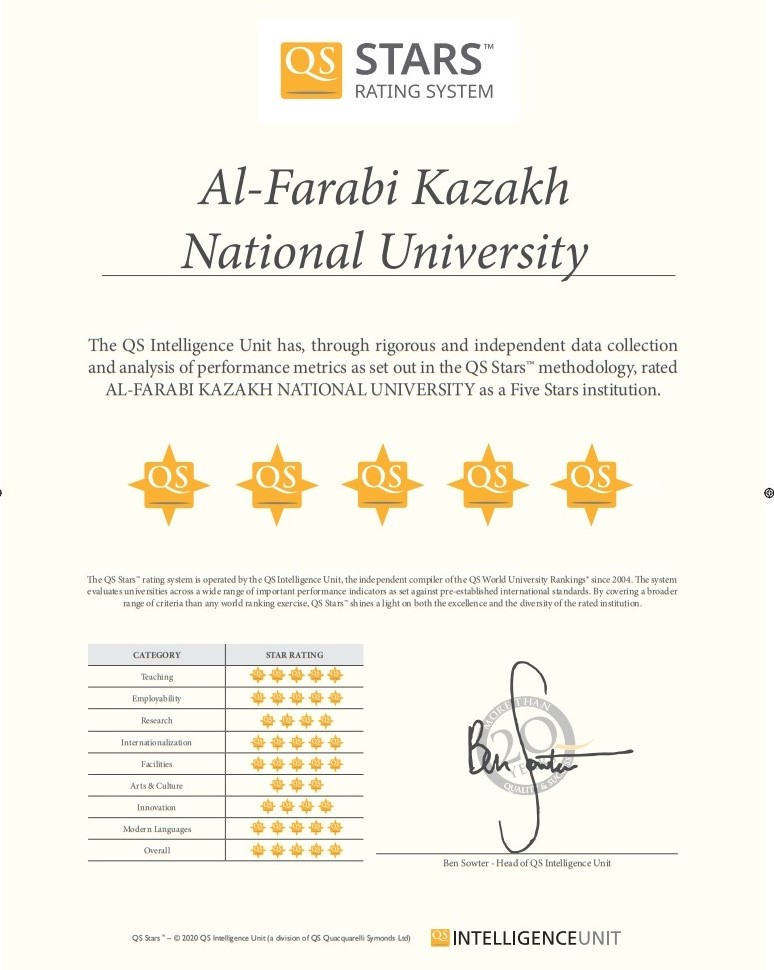 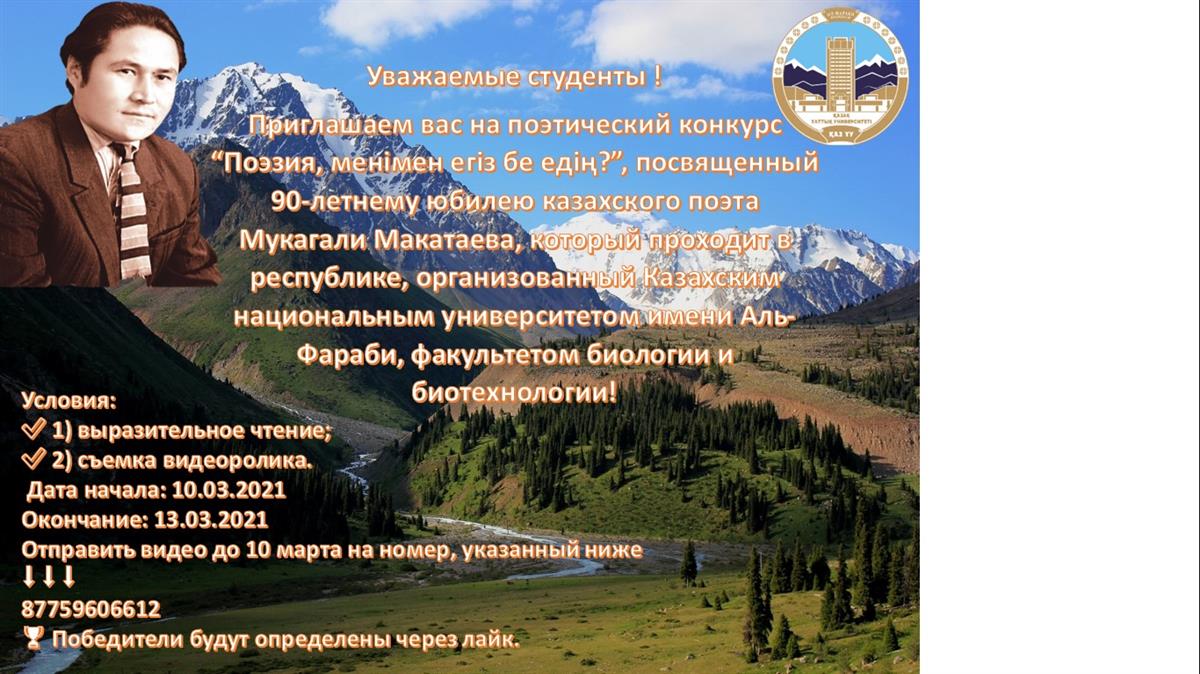 The poetry competition organized by the Al-Farabi Kazakh National University, dedicated to the 90th anniversary of the Kazakh akyn-Mukagali Makatayev, was held from 11.03.2021 00: 00 to 12.03.2021 00: 00. The total number of participants is 8. The results of the contest were determined by the like. And now let's sum up our long-awaited result 🤗 ️ ️

Bolatov Nurdaulet, a 3rd-year student of the Kazakh Agrotechnical University named after S. Seifullin, is awarded in the category "Audience Sympathy".

🔺 I sincerely congratulate all the participants! Let there be many achievements in your future life! ✅ 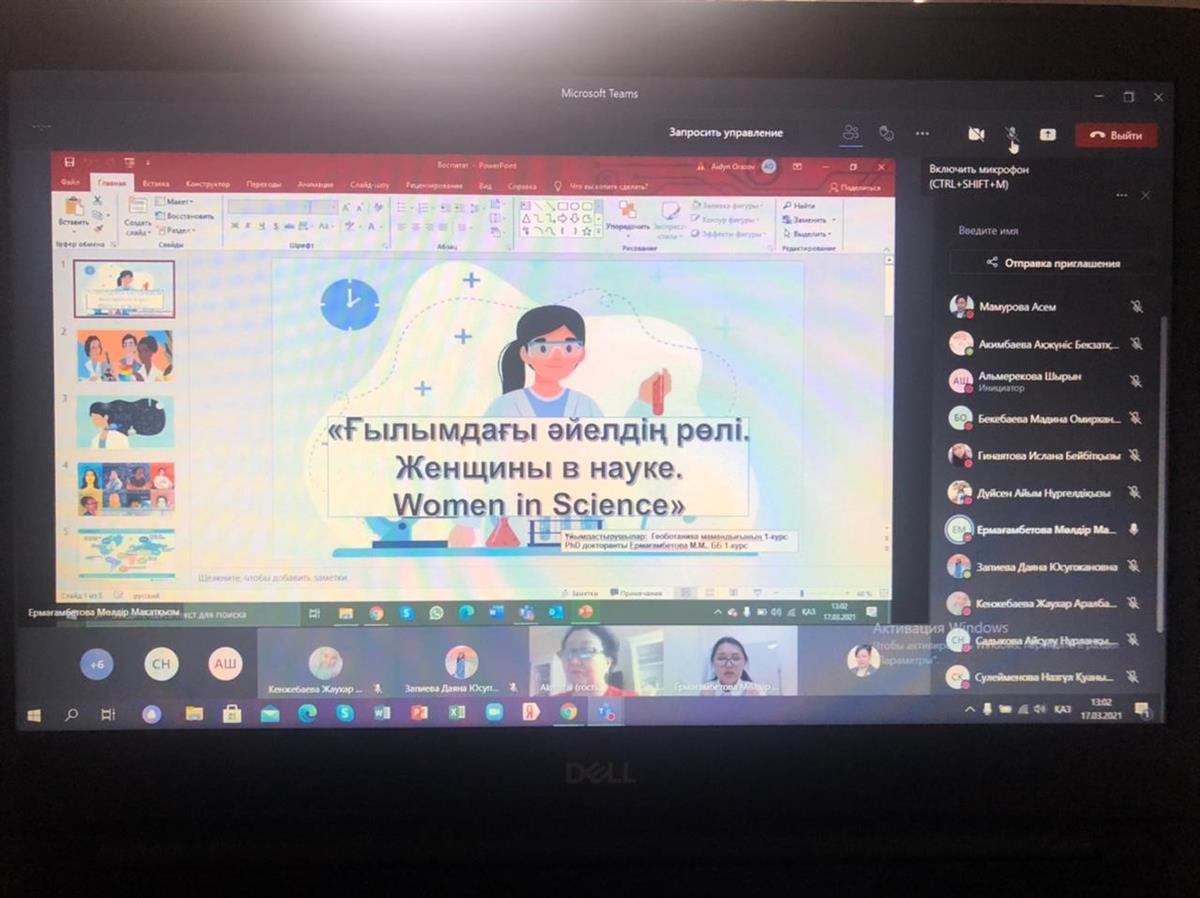 “The role of women in science"

1st year PhD student of the specialty Geobotany of the Department of Biodiversity and Bioresources of the Faculty of Biology and Biotechnology M. Ermagambetova, within the framework of pedagogical practice, on March 17, held a seminar “Women in science"an online educational event in three languages ​​was held. The event was attended by the methodologists of the faculty, teachers of the department, teachers of the Department of Pedagogy, doctoral students and students. During the event, issues of the contribution of women to modern science were discussed. women scientists holding a special place in science The educational event was held at a high level. Practice leader: Almerekova Sh. 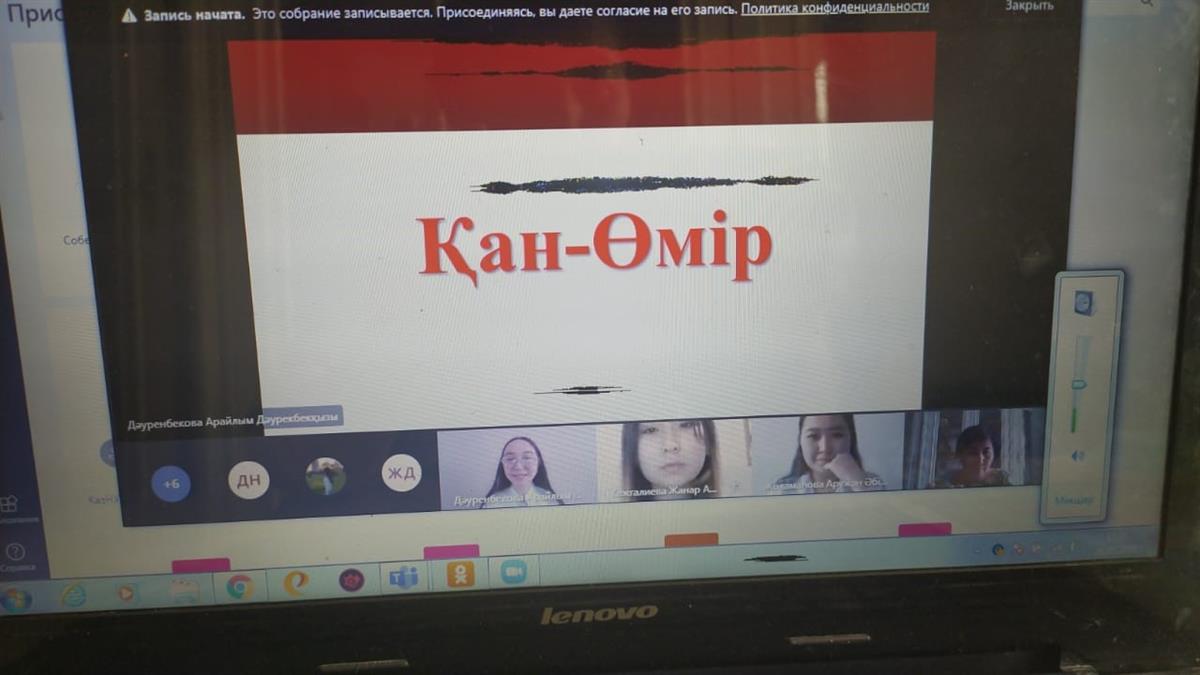 2) a new method of "queens", invented by students.

During the lesson, students focused on the importance of blood in human life, on the types of diseases that occur under the influence of blood, and on ways to prevent them. We studied the works of world scientists, exchanged opinions with each other.