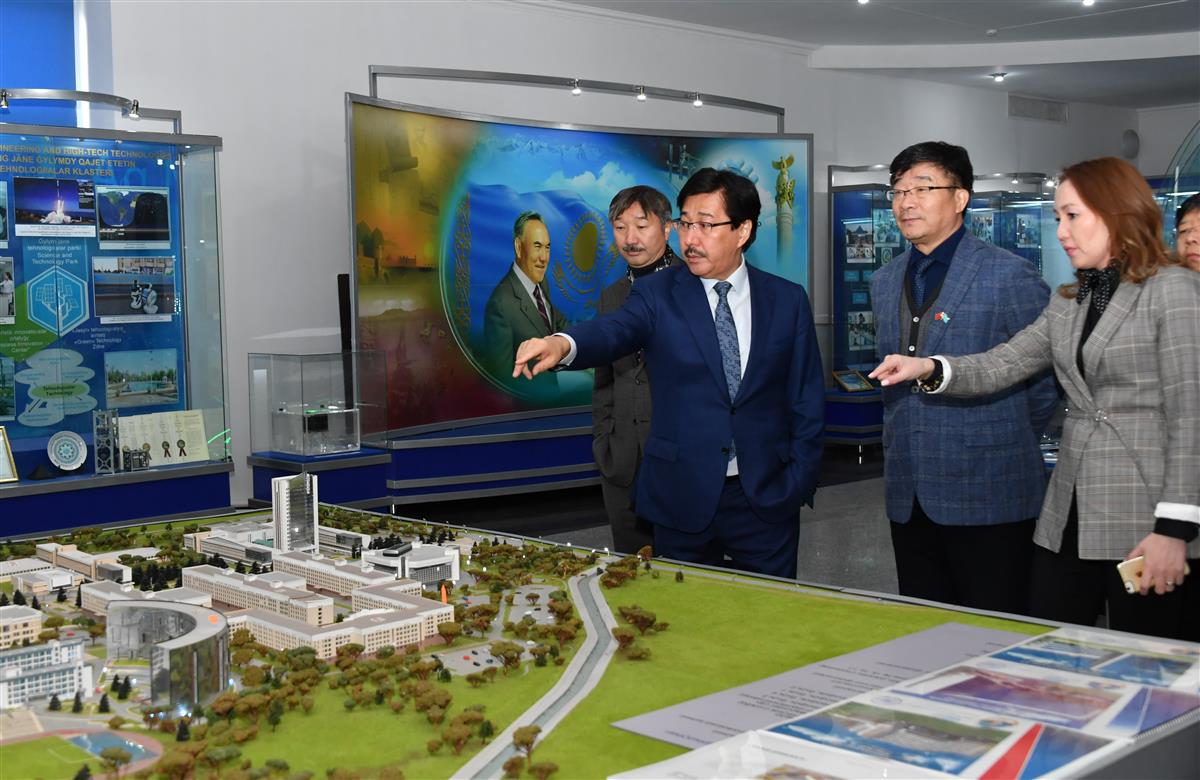 Presentation of the book by Liu Wei and Su Jian «Kytay ekonomiysyn tygyraktan shygar zholy», published at the University in Kazakh language, was held at KazNU.

A delegation of Chinese colleagues, led by the author of the book, Rector of the People’s University of China, Professor Liu Wei, came to the presentation in Almaty. Honorary guests were met by Rector of Al-Farabi KazNU Galym Mutanov. During the campus tour, colleagues from China got acquainted with the museum of the University and the center of situational management.

Welcoming the guests at an official meeting, the Rector emphasized the importance of cooperation with China in higher education. Al-Farabi KazNU today works closely with 41 higher educational institutions and organizations of the PRC, including leading universities: Lanzhou University, Shanghai University of Foreign Languages, Shanghai University of Politics and Law, Wuhan University, etc. Every year, KazNU students undergo internships, participate in scientific seminars and conferences in these universities. Leading professors and scientists of China come to KazNU to give lectures, carry out scientific guidance on doctoral PhD students.

In turn, Mr. Liu Wei thanked Galym Mutanov for the warm welcome and publication of the book «Kytay ekonomiysyn tygyraktan shygar zholy», which contains articles by Chinese scientists, presents their view on various problems of the modern development of the Chinese economy.

At the end of the official part, a presentation of the book was held in the conference hall of the Business Competency Development Cluster. The ceremony was attended by guests from China, led by Professor Liu Wei, as well as rector Galym Mutanov and representatives of the faculty and top management of KazNU.

«The economy of the People’s Republic of China is developing rapidly, today the country has become one of the world economic powers, - said Galym Mutanov at the presentation. - Of course, this is the merit of prominent figures, scientific economists like Professor Liu Wei. Therefore, we are sure that the book of Professor Liu Wei, translated into Kazakh, will be interesting not only to our students, but also to economists, financiers, political scientists, who are studying the phenomenon of Chinese economic development».

Professor Yerzhan Zhatkanbaev also praised the work of his Chinese colleagues: «In fact, this is the first book in the Kazakh language that highlights the problems of the Chinese economy. The book contains titanic work, an analysis of the situation in 35 cities of the country. Such a detailed analysis allows not only researchers, but also managers to see the intricacies of business processes and take them into account in practical activities. Only with this approach will economic research become relevant in economic activity».

The presentation ceremony of the book ended with commemorative photography with the participants of the meeting.