Project name: Biologically active additives and biostimulants based on microalgae for use in the agricultural and food industries

Scientific supervisor of the project: Doctor of Biological Sciences, Professor, Academician of the National Academy of Sciences of the Republic of Kazakhstan Zayadan B.K. The

purpose of the project is to develop a technology for obtaining biologically active additives and biostimulators for use in the agricultural and food industries based on production-valuable strains of microalgae.

Microalgae, being a source of many valuable compounds, are of great interest in the agricultural, medical, cosmetic and food industries as new and safe sources of biologically active drugs. They are characterized by immunomodulatory, antioxidant, antimetastatic action, capable of inhibiting the development of malignant tumors in humans and animals. Biologically active additives based on these organisms are natural, affordable, environmentally safe preventive biological products that do not cause adverse reactions, do not have contraindications to use.

Microalgae contain up to 50-70% easily digestible protein (compared to 50% in meat and 15-17% in wheat), up to 30% lipids, more than 40% glycerin, up to 8-14% pigments, including carotene and a fairly high concentration of vitamins B1, B2, B3, B6, B12, E, K, D compared to other plants or animals. Food microalgae are a good source of proteins, essential amino acids, phytosterols, carbohydrates, vitamins, characterized by a unique combination of biologically active compounds, polyunsaturated fatty acids with a high content of gamma-linolenic acid and many other healthy compounds. They, having unique biochemical and physiological properties, are sources of pigments such as chlorophyll, alpha- and beta-carotene, lycopene, lutein, zeaxanthin and astaxanthin, phycocyanin, which, having antioxidant and antitumor properties, are used in the medical, food, nutraceutical and cosmetic industries.

Microalgae are well known for their diverse biological actions, such as antibacterial, antifungal, cytotoxic, immunosuppressive, antiallergic properties and antiviral activity, which also predetermine their great potential in medicine and pharmacology, when obtaining biologically active additives and biostimulants to strengthen immunity.

A large number of sunny days and the favorable geographical location of our Republic of Kazakhstan, the relative ease of cultivation of microalgae to obtain its biomass create prerequisites for the development of production facilities for the production of biologically active additives (dietary supplements) and biostimulants based on them. It is shown that the use of microalgae in animal husbandry as a source of protein, vitamins and other physiologically active substances increases the resistance of animals to various diseases, primarily associated with vitamin deficiency, accelerates metabolic processes, and thus contributes to an increase in the volume and quality of marketable products. In addition, it should be noted about the possibilities of creating new jobs at enterprises producing biological products, bio-feeds and dietary supplements.

The technology of obtaining new biologically active additives and biostimulants based on production - valuable strains of microalgae will be developed and their biological properties will be studied.

The formulation and commercial forms of new biologically active additives and biostimulants based on the biomass of production- valuable microalgae strains will be developed.

The technology of obtaining dietary supplements based on microalgae has great real prospects for its introduction into production. The prospects of this project are determined not only by economic profitability, but also by the possibility of obtaining new, environmentally friendly, unique biological products based on microalgae. Therefore, the issues of industrial production of microalgae attract more and more attention of researchers and industrial firms. Thus, having high productivity, these facilities are at the same time producers of new valuable products that are widely used in the food industry (as biologically active additives) and in the agricultural sector, in particular in animal husbandry, poultry farming, fishing (biologically active feed additives). At the same time, it should be borne in mind that obtaining biologically active additives based on microalgae can be economically advantageous, since it does not require expensive equipment and nutrient media for their cultivation.

The competitiveness of this project is determined by the above-mentioned unique properties of microalgae and the advantages of their cultivation technology (cheap nutrient medium, sun, not expensive equipment). The proposed project is original, while there are no analogues in the Republic. Microalgae biotechnology is well developed in the USA, Japan, India, Russia, China, the Czech Republic and other countries of the world. There are no enterprises in Kazakhstan for the production of biological products based on microalgae and other phototrophic microorganisms. The project has a good commercial perspective and a great potential for commercialization. 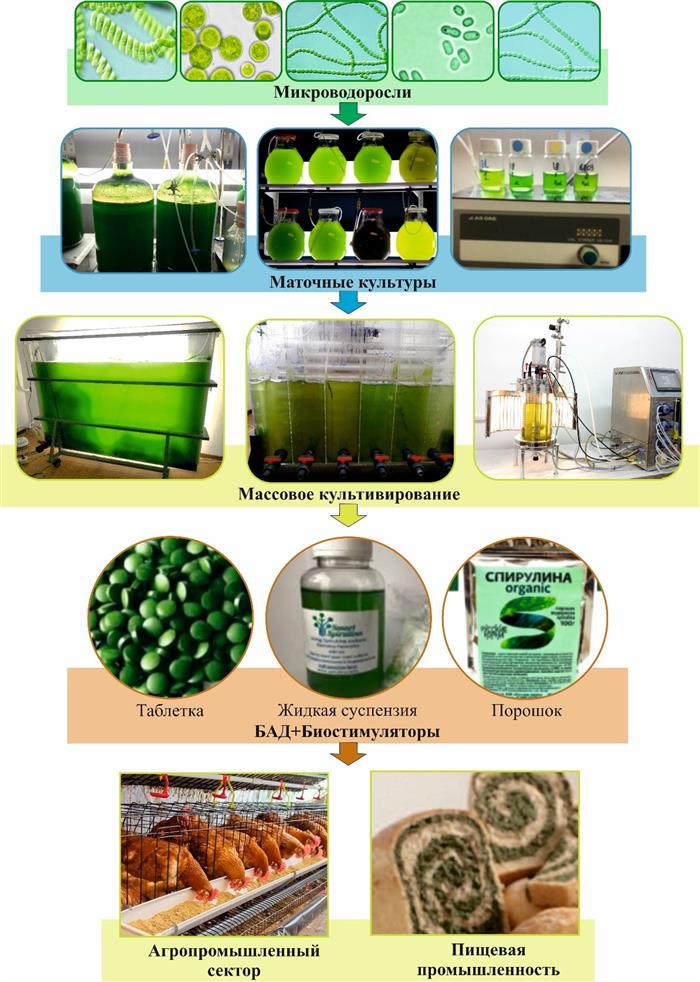 SCIENTIFIC ACHIEVEMENTS OF THE FACULTY