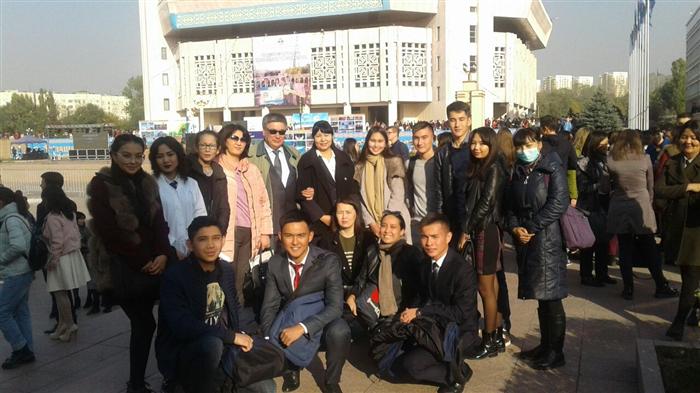 The number of students is growing  year by year. This year about 7 thousand students came KazNU, 4098 of them became owners of the state grants, 897 of them are owners of gold medals "Altyn belgi", 35 are winners of international Olympiads and competitions, 187 are of graduates of Nazarbayev Intellectual schools and about 300 students are winners of the Olympiad of al-Farabi.

KazNU rector Mutanov Galym handed freshman ID card and the key to the country knowledge, congratulated the students and wished them good health and success in school.

It is noteworthy that two years running KazNU is in the TOP 250 best universities in the world, saving 236 position in the ranking of best universities according to QS World University Rankings (UK). It should be noted that only two universities from the CIS countries included in this group – Lomonosov MSU and al-Farabi KazNU.

At the end of the feast, the choir of freshmen sang the students hymn "Gaudeamus" and the song " Жасай бер, ҚазҰУ-ым."  After receiving a symbolic "student ID" and "key to knowledge", the freshmen have officially joined the ranks of students of the al-Farabi Kazakh national University. We wish all the freshmen academic success, active and vibrant student life!

Center of "Chronobiology and chronomedicine"

Circle of problems of Biophysics and Biomedicine