INNOVATIVE SCIENCE - THE BASIS OF THE NEW KAZAKHSTAN 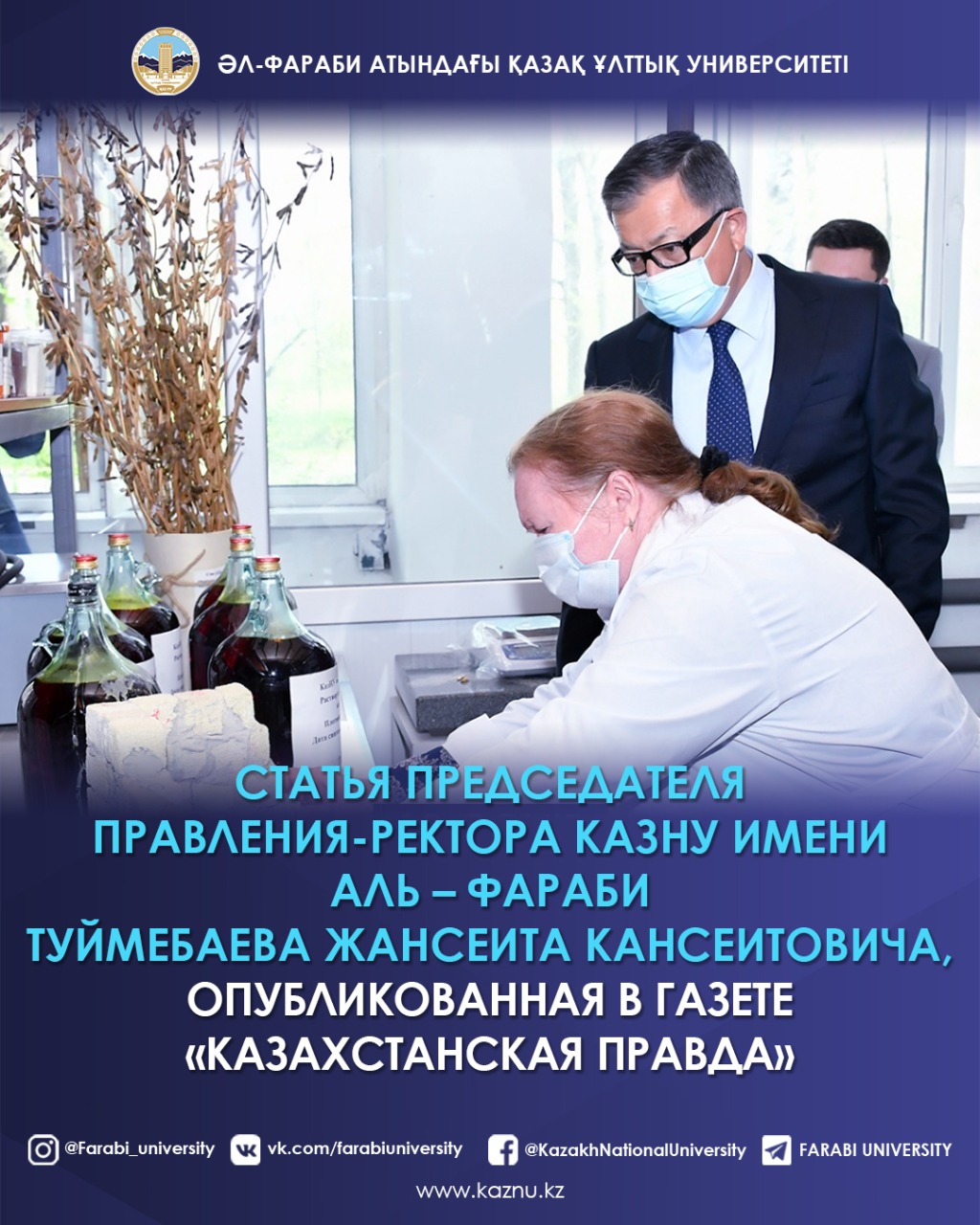 Today, the President of Kazakhstan, Kassym-Jomart Tokayev, attaches particular importance to the continuous development of science, support for promising scientific research and increasing the intellectual potential of our people.

I would like to note that in the implementation of the tasks for the development of Kazakhstani science, set by the President of the country Kassym-Jomart Tokayev, the main role is assigned to research universities. In his Address to the people of Kazakhstan, the Head of State noted: "In general, Kazakhstani education and science faces a large-scale, urgent task - not just to keep up with new trends, but to be one step ahead, to generate trends."

In the national innovation system of any country, a special role is played by research universities, which are the most important element of a knowledge-intensive economy. All the world's well-known high-tech areas are developing on the basis of research universities and successfully fulfill the role of drivers of innovative development in their countries and regions.

KazNU named after Al-Farabi in practice implements the model of a research university, based on the results of fundamental and applied research. Forming a mechanism for the modernization of the Kazakh economy, the university carries out research and development that is useful for society and business. The main vector for the development of scientific activity of KazNU is the preservation of fundamental areas of research.

The university is already today a large intellectual corporation, which operates a unique scientific and innovative infrastructure that has no analogues in other universities of the country.

Now the university has 16 faculties, 18 institutes and centers of the natural sciences, including the Center for Physical and Chemical Research and Analysis Methods, the Science and Technology Park, the National Nanotechnology Open Laboratory, and 21 research institutes and centers of social and humanitarian profile. Based on this base, a cluster approach "from generating ideas to their commercialization" is implemented.

In order to convert the results of scientific work into high technology and production in 2021, the Center for Technology Commercialization was created at KazNU, which works towards building meaningful cooperation between the university and business through the introduction into production and subsequent commercialization of scientific developments, as well as the creation of innovative industries. Thus, additional investments in science are attracted.

Within the framework of the "10 National Projects", the priority direction of the Head of State was "Quality and affordable healthcare for every citizen" Healthy Nation ". In KazNU, in 2021, in order to develop applied research in the development of medicines, devices and methods, the Center for Vascular Pathology was created, and small-scale production of dietary supplements based on phytochemistry is being organized.

High-quality scientific research is the first and important stage in the implementation of the "innovation corridor", followed by Research and Development (R&D) and commercialization of scientific and innovative results.

Innovative enterprises, start-up and spin-off companies that have attracted about 2 billion tenge in the form of grants from the World Bank and the Science Foundation in recent years, have launched small-scale production of high-tech products at KazNU.

Scientists of KazNU have been able to announce the latest discoveries today. For example, university biotechnologists have created a biological plastic with the help of a bacterium, which has such valuable properties as environmental friendliness, water solubility and biodegradability. For the production of bioplastics, a bioreactor, a nutrient medium and a strain are sufficient. The material itself can be produced on an industrial scale. Bioplastics can replace oil-derived plastics. Thus, the era of plastics in the near future may sink into the past. In the age of globalization, it is necessary for mankind to create useful things that would support the environment and human health. From this point of view, the discovery of KazNU scientists can be the greatest achievement of our time.

As part of the introduction of alternative energy sources, the university is working to establish the production of energy-saving gas-discharge lamps with nanoparticles with a predicted volume of at least 50,000 units per year, with a subsequent increase to 100,000 units of lamps per year. The production of low-cost lamps, the intensity of which is one and a half times greater than similar fluorescent lamps, can solve the problems of low domestic production and a high share of imports in the market of similar products and technologies.

A group of researchers of our university continues the design work on the development of efficient photocatalysts based on heterostructural nanocomposites, obtained for the first time by mechanochemical method. The implementation of this project will increase the competitiveness of Kazakhstan's science in the field of renewable energy research. As you know, the world's reserves of oil, gas and coal are limited, and this fact stimulates scientists to search for new sources of it. The technology developed by KazNU researchers is economically viable and advantageous compared to other methods for producing photocatalysts. As a result, the resulting nanocomposites will have a low cost. The hydrogen created by scientists in the future will become an alternative product to replace oil, which will help solve the problem of finite natural resources.

In the field of chemistry and new materials, the production of NANOQUQIRT organic stimulants based on nanosulfur has commercial appeal. The results of tests at the facilities of the agro-industrial complex (LLP "Amiran AGRO", LLP "Bakhus Global", etc.) have already shown the effectiveness of sulfur-containing drugs to stimulate plant growth and protect plants from diseases and pests. A group of chemical scientists is also working on the creation of sodium-ion batteries, the production of which is 40% cheaper compared to analogues of solar energy storage devices, which is beneficial for large stations. At the same time, at the moment there is not a single large-scale production of such batteries in the world.

One of the developments aimed at the development of STEM technologies in educational institutions is the innovative designers of small artificial Earth satellites "ALFASAT", designed to teach schoolchildren and students the basics of developing, designing, assembling, testing and operating a spacecraft. When working with the constructor, students develop not only Hard Skills, but also Soft Skills. Thanks to the study of the material in a team, users gain in-depth knowledge of the design of a real spacecraft.

Scientific projects in the natural sciences often require huge and expensive infrastructure that no country can afford alone - not every country can have its own Large Hadron Collider. Therefore, for KazNU, as well as for other participants in the global scientific arena, it is especially important to cooperate with a large number of organizations, creating conditions for each collaborator to be able to afford science. This mutually beneficial interest, in turn, leads to an extremely fruitful cross-fertilization of ideas, which only contributes to the further advancement of scientific knowledge.

That is why for us an important role in the internationalization of research activities is played by the systematic expansion of international scientific and educational contacts, the use of foreign experience, and interaction with international organizations. KazNU, being the best university in Kazakhstan, is actively working towards the development and exchange of scientific knowledge: joint research is carried out within the framework of such international programs as Erasmus+ and OSCE. Moreover, in order to stimulate the development of Kazakhstani science and strengthen the influence of domestic researchers on the international stage, KazNU scientists closely cooperate with international foundations and organizations, such as the International Agency for the Universities of La Francophonie, American Councils, France Sefasil Foundation, Rufford Foundation, Rosa Luxembourg Foundation etc.

An effective system for training scientific personnel has been built in the country's leading university, which is of great relevance in the context of the transition to a diversified economy. In this context, one of the target indicators for the transformation of KazNU into a research university is to increase the share of undergraduates and doctoral students to 25% by 2025, which will strengthen the scientific potential of the university at the expense of young scientists.

Research work (RW) of students at the university has been put on a qualitatively new level and about 10.5 thousand students, undergraduates and doctoral students are involved in it. The amount of funding for research work allocated to attract students to research on a paid basis is 10% of the total grant funding for R&D of the university, or about 300 million tenge.

Within the framework of student business incubators at KazNU, more than 70 innovative projects are being implemented in such areas as: IT technology, robotics, alternative energy, biotechnology and biomedicine, marketing, social sciences and the humanities. Having formed professional competencies, university students learn to create jobs, start-ups and their own enterprises with know-how technologies.

Every year, scientists and teaching staff of the university are awarded honorary titles, international and state awards for their contribution to the development of science, are awarded medals based on the results of participation in scientific and technical events, become winners of various competitions, which confirms their high professional qualifications.

In February of this year, KazNU named after Al-Farabi signed a General Cooperation Agreement with 19 research institutes.

I am convinced that KazNU scientists can and should take an active part in building the future of our republic. It is necessary to widely involve scientists in solving the social and economic problems facing Kazakhstan, which, ultimately, will contribute to building a competitive knowledge-based economy of the country. At the same time, the main contribution to increasing the global competitiveness of scientific and innovative activities and increasing its contribution to the socio-economic development of the country are: strengthening the human and scientific potential of scientists, modernizing scientific infrastructure, commercializing R&D results and coordinating scientific and technological development. At the level of ministries, an investment project for the transformation of KazNU named after Al-Farabi into a research university is being examined. The project aims to strengthen the innovation ecosystem of the university through the opening of the Al-Farabi SciTech Center. It will be focused primarily on the sharing of its infrastructure by scientists from different fields of science. All this will allow, in the light of building a new Kazakhstan, to achieve high results and ensure the sustainable development of the university by creating an effective model of corporate management of scientific and innovative activities.