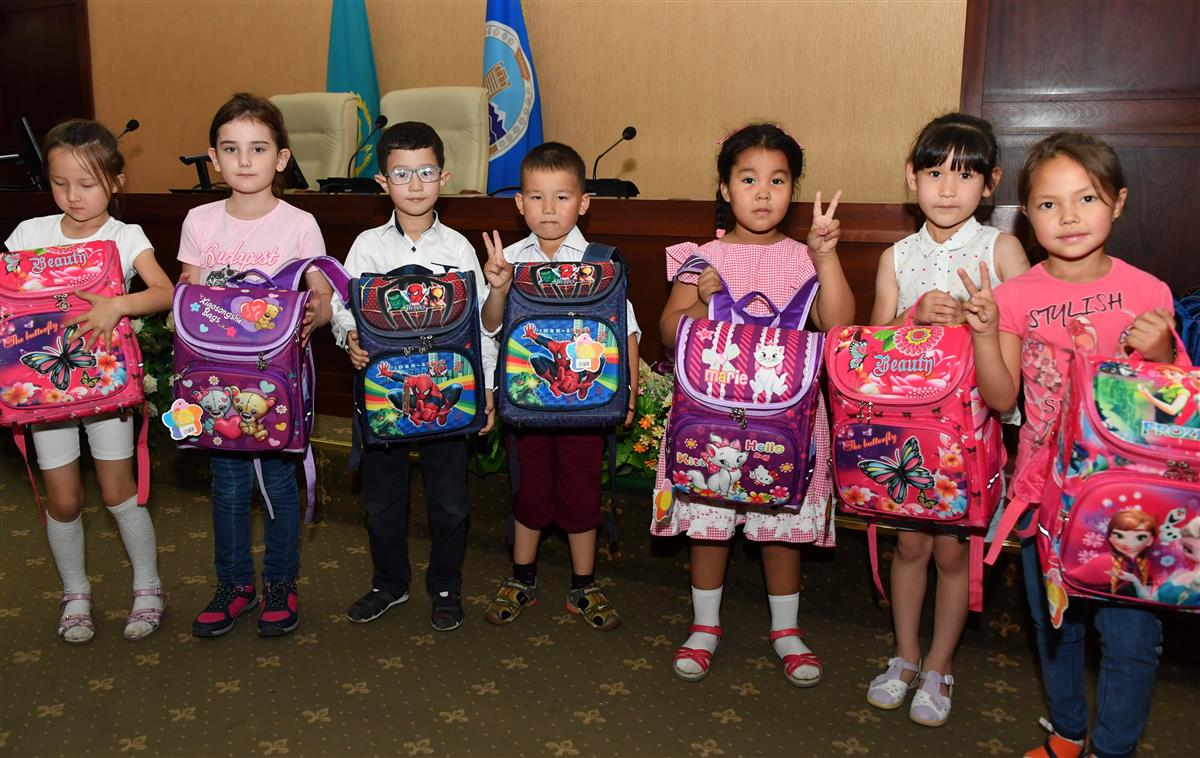 The child goes to school for the first time. This is an important event not only in his life, but also in the life of his parents. Therefore, for the third consecutive year the «Parasat» Trade Union of workers of Al-Farabi KazNU, with the support of the University administration, presented all the children, who go to the first class, school bags and school supplies. This is a good social support for parents. Thus, the Trade Union and the University decided not to stop there: this year, 211 future first-graders received briefcases, notebooks, pens, pencils, pencil cases, watercolors and drawing albums.

The representatives of the «Parasat» Trade Union highlighted by handing the backpacks that school supplies have been bought with warmth and hope, and they hopes that these portfolios will be full of excellent marks. The conference hall of the rectorate, where this holiday is held, was traditionally full. This time it was full by future students, accompanied by their parents, younger brothers and sisters, since it is a memorable event for children. The «heroes» of the celebration were not at all embarrassed, but they even staged an improvised concert: they read poems and sang songs. Nurdaulet Bitarapov recited the poem «Men mektepke baramyn», Nusipzhan Ayaru read the poem by Mukagali Makatayev «Besik basynda», Adil Kalaubek read the poem by Mukagali Makatayev «Tugan kүn».

Lecturer of the Faculty of Medicine and Health, G.M. Usataeva pointed out that her daughter was delighted with both the gift and the fact that her status as a first-grader is recognized not only by her relatives, but also by such a solid and well-known University - Al-Farabi KazNU. «Nurzhan Saparbayeva, Assistant Professor of the Faculty of Oriental Studies, emphasized: «I am the mother of four children. Last year my daughter received a briefcase, this year - my son. The help of the Trade Union is very useful for me».

Mother of the first grader Aksunkhar Seisenbai - Senior Teacher of the Journalism Department Marzhan Nurmanova and the father of the first grade student Merey Kerimbai - Senior Teacher of the Faculty of Oriental Studies Yerzhan Kerimbaev, who is also a father of many children, wished joyful discoveries and great success in mastering school sciences to the children. «As soon as you cross the threshold of the school, a new world will open up before you. Therefore, learn with pleasure!» - they instructed children.

The children immediately put on bright briefcases and proudly took pictures. Moreover, even someone could not resist, and opened the «Trade Union’s» gift and looked inside of it. Albums with the image of favorite characters, bright pencils and paints, erasers and pencil cases - the accessories for the study will go with the boys and girls to the first class in their life.

The Head of the Department of Social and Educational Work, T.B. Abishev told about the social significance of the project of the «Parasat» Trade Union, who is also the father of a first-grader.

Chairperson of the «Parasat» Trade Union of the workers Al-Farabi KazNU T.K. Mekebaev believes that this action - «Collect a portfolio for a first grader» -will help many families of the University workers to prepare their children for school. He highlighted that the solemn presentation of portfolios to future first-graders, whose parents work at the University, should be an integral part of corporate culture. The «Parasat» Trade Union of workers of Al-Farabi KazNU on the initiative of Rector, Academician G.M. Mutanov and with the support of the University administration holds this action for the third time, and it clearly demonstrates the social partnership in action. The University and the Union will continue to jointly carry out this important social action.