ANNIVERSARY OF ZHAMBYL IS A COMMON CELEBRATION FOR TURKISH PEOPLES 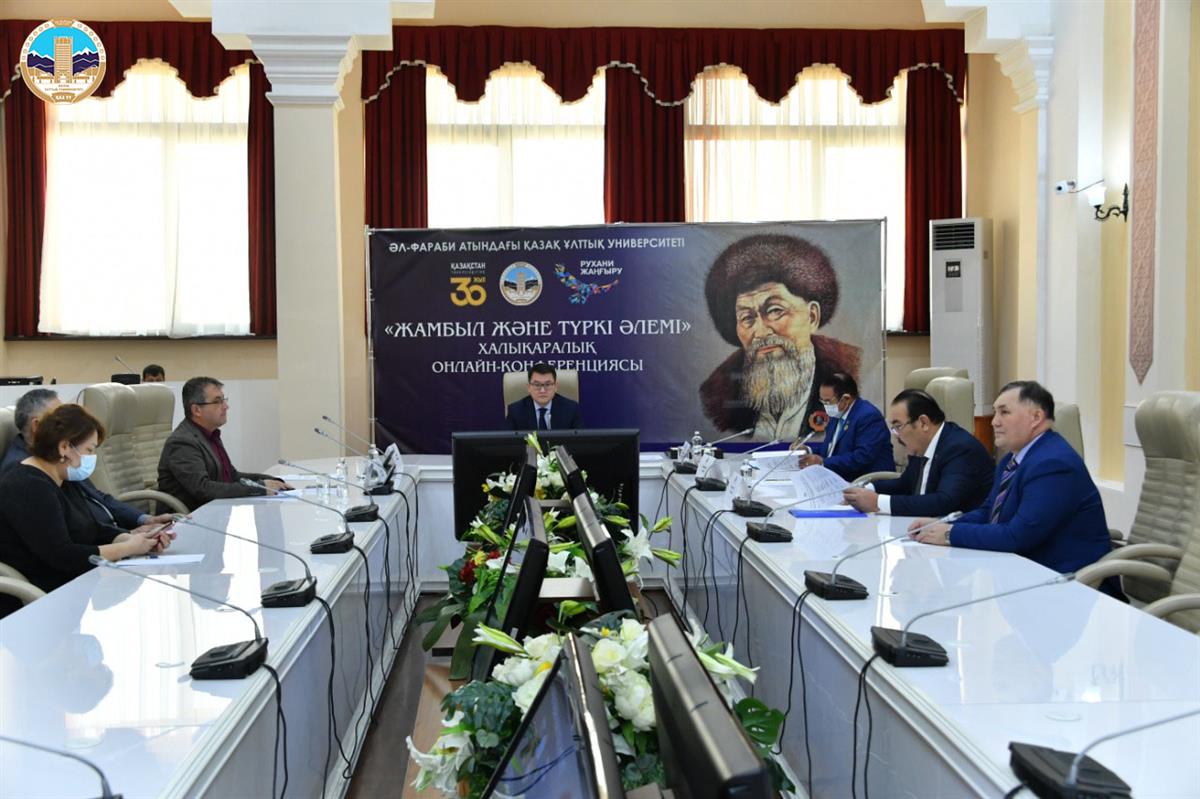 As part of the Zhambyl Week at the Al-Farabi Kazakh National University, the International Online Conference "Zhambyl and the Turkic World" was held. The event was attended by well-known scholars of zhambyloved, writers, journalists from Kazakhstan, Turkey, Uzbekistan, Kyrgyzstan, Bulgaria, Bashkortostan and the Republic of Sakha, as well as students of the educational institution. 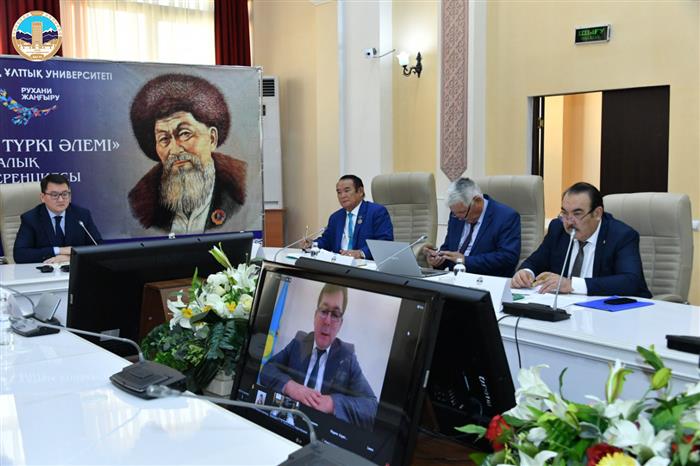 The Chairman of the Board - Rector of KazNU Zhanseit Tuymebaev made a welcoming speech. “The first President of the country - Elbasy Nursultan Nazarbayev gave the great Zhambyl a historical assessment, his human qualities, morality, justice and kindness. At the beginning of this year, by the decree of the Head of State of Kassym - Zhomart Tokayev, a special state commission was created to organize the 175th anniversary of the great poet at a high level, ”the head of the university noted, stressing that the anniversary of Zhambyl is a holiday of spirituality common for Turkic-speaking peoples. - In the Turkestan Declaration, adopted this year at the informal summit of the Cooperation Council of Turkic-speaking States in the city of Turkestan, it was said about the need to celebrate the anniversary of Zhambyl Zhabayev along with significant dates of the great personalities of the Turkic world. In accordance with this, the Al-Farabi Kazakh National University makes a significant contribution to the study of the work of the great poet, promoting the heritage of Zhambyl among the younger generation.

This year, to the 175th anniversary of the poet, with the assistance of the Research Center "Zhambyl" KazNU published 10 volumes. The compiler of the collection is a famous writer, zhambyloved Nagashybek Kapalbekuly. Another 10-volume issue is being prepared to popularize the legacy of Zhambyl. Four volumes of this noble work were published by the outstanding scientist Zhangara Dadebaev. 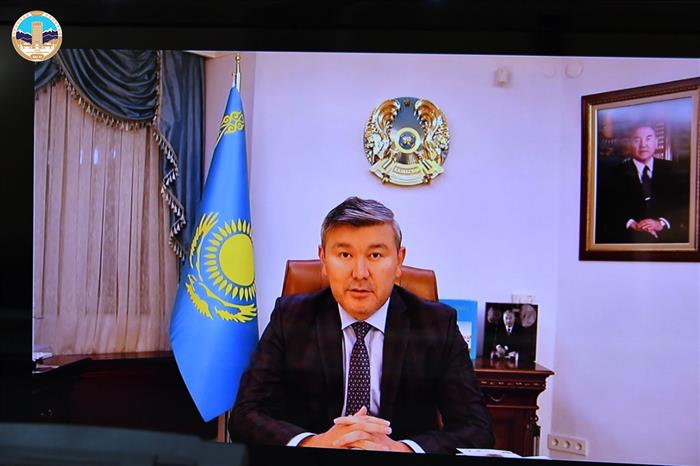 Recently, at the 16th international book exhibition in Ankara, the presentation of the saga "Koroglu", translated into Turkish in honor of the 30th anniversary of Independence of Kazakhstan and the 175th anniversary of Zhambyl Zhabayev, took place. The collection, which includes the Zhambyl poetic version of the work, common for the Turkic peoples, was published with the support of Al-Farabi KazNU and the Bengu publishing house under the Eurasian Union of Writers.

As part of the "Zhambyl Week" in our educational institution, exhibitions of books and drawings, meetings with the descendants of Zhambyl, poetry evenings were organized. A special expedition to the mausoleum and museum of Suyunbai - Zhambyl is planned. 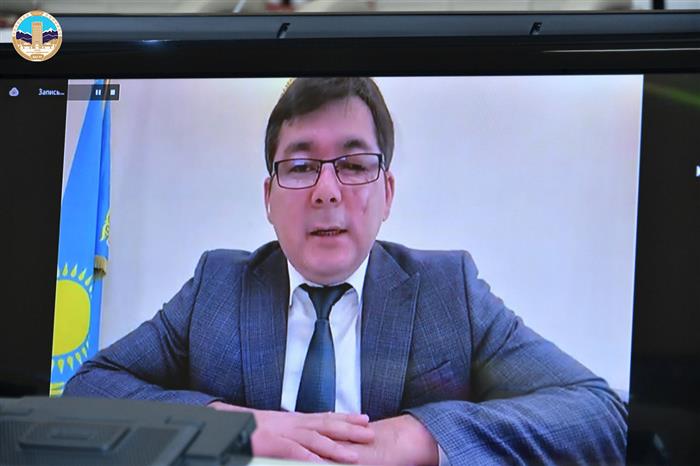 “The time has come to rethink the works of Zhambyl Zhabayev and study them in a new way, taking into account the worldview of the Turkic world,” said Zhanseit Kanseitovich.

Vice Minister of Culture and Sports of the Republic of Kazakhstan Nurgisa Daueshov also addressed the conference participants and focused on cultural events that are held in the country in honor of the 175th anniversary of Zhambyl. This year, multivolume books, television series dedicated to the life and work of the poet were released. Collectible coins “Zhambyl-175” were produced for the anniversary. The publications of neighboring countries have published articles about the poet, his works have been translated into Turkish. The vice minister also noted that in order to popularize the heritage of the national akyn for future generations, scientific conferences, festivals and poetry evenings were organized in many educational institutions.

In addition, the Ambassador of Kazakhstan to Turkey Abzal Saparbekuly joined the online conference and drew attention to the relevance of cultural and spiritual ties that increase the level of relations between the two fraternal countries. “I believe that today's conference is very important from the point of view of our revival, glorification and memory of the great spiritual world, its contribution to the Kazakh and Turkic culture in general,” the ambassador said, adding that our distant Turkish brothers and sisters took part in the events held within the framework of the anniversary of the poet on the Anatolian land. 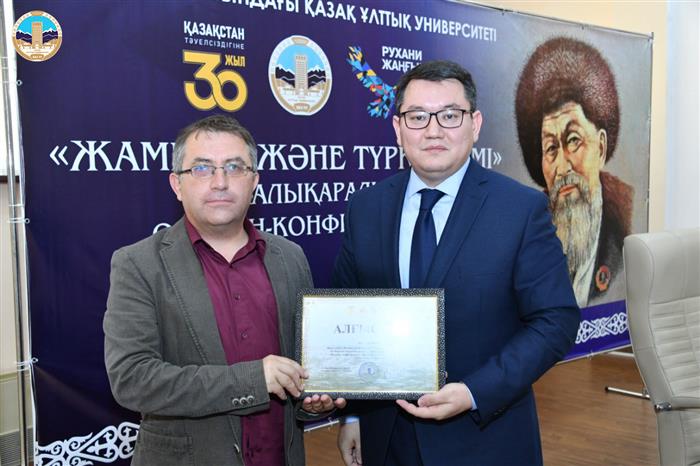 In Ankara, in the Kechuren region, Zhambyl Zhabayev street, a park and a monument to the teacher of akyn Suyunbay were once opened, this is the merit of the KazNU rector Zhanseit Tuymebaev, who worked in Turkey at the embassy. A commemorative plaque was recently erected on the same street. In conclusion, the ambassador thanked everyone who took part in the popularization of the heritage of Zhambyl and the fraternal Turkic community and wished success in the work of the conference.

Professor of the Institute of Ethnology and Folklore Studies of the Bulgarian Academy of Sciences Nikolai Vukov made a report on the tradition of zhyrau in world folklore and the poetics of Zhambyl's works.

“I am very glad that we are discussing this hot topic together. It is important to exchange views and share the research experience of outstanding representatives of folk art, including the unique Kazakh poet, ”the scientist said.

The relevance of the scientific event, contributing to the strengthening of relations between the Turkic peoples, in his speech was noted by the academician of the Academy of Humanities of the Republic of Kazakhstan Temirkhan Tegenov. In his report, he dwelt in detail on the problem of the creative consonance of Zhambyl and the poets of the Turkic world, and classified their analogies.

Also at the conference were: associate professor of Kochman University Mugla Sytki Turkey Ekrem Ayan, professor of Pamukkale University Nergiz Birai, expert of the Supreme Council of the Kyrgyz Republic, professor Zhuldyz Orazbekova, chief researcher of the Institute of Literature and Art named after M. Auezova, writer Nurdaulet Akysh, candidate of philological sciences, professor Anarbai Buldybai and director of the Zhambyl research center of KazNU Almasbek Maulenov, who expressed their opinion on the poetic qualities and original work of the giant of Kazakh poetry. The participants came to the conclusion that the rich heritage of zhyrau, which combined the continuity of generations with great art, will forever remain the spiritual heritage of the nation.