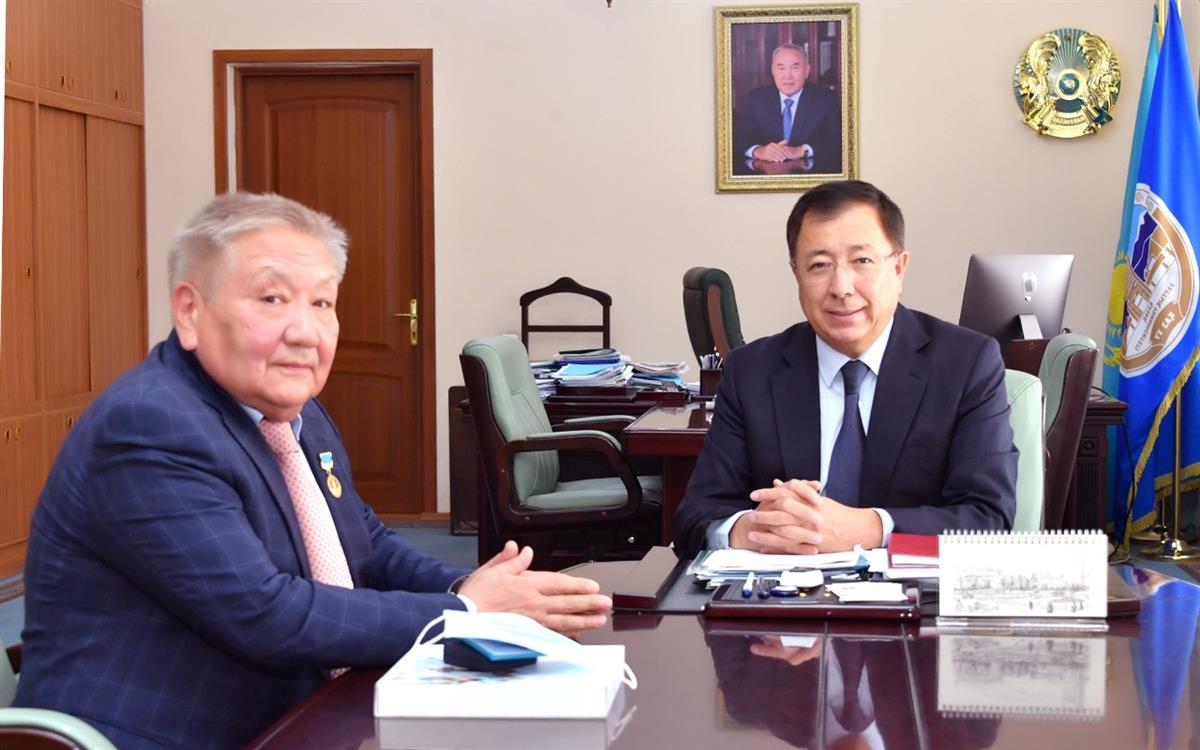 Today the Chairman of the Board - Rector of Al-Farabi KazNU Zhanseit Tuimebayev met with a famous statesman, diplomat, head of the Center for International Programs of the Foundation of the First President of the Republic of Kazakhstan Kairat Abuseitov.

The head of the university thanked the famous figure who came to his native university to give lectures in honor of the 30th anniversary of the Independence of the Republic of Kazakhstan. Emphasizing the importance of promoting the history of the independent country among young people, the rector noted that university graduates work in various fields not only in the country, but also abroad. 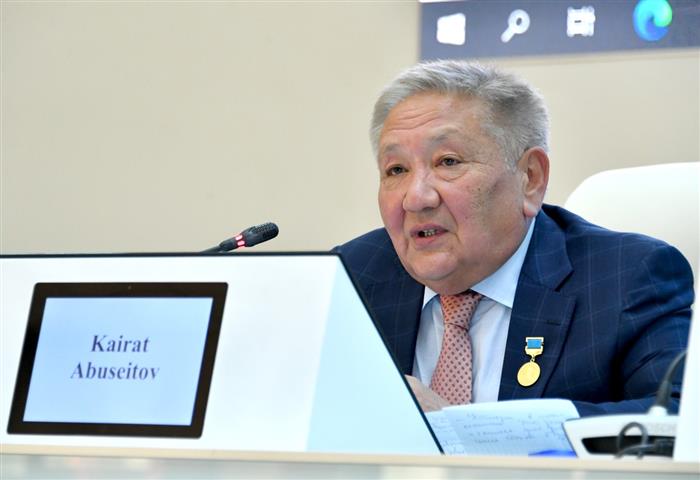 Proudly emphasizing that al-Farabi Kazakh National University graduates are at the forefront of national diplomacy, he highly appreciated the significant contribution of the famous graduate of the Faculty of History, outstanding figure Kairat Abuseitov to the formation of independent diplomacy in independent Kazakhstan. Over the years, he served as Vice Minister of Foreign Affairs and First Vice Minister of the Republic of Kazakhstan, as well as Ambassador Extraordinary and Plenipotentiary to the Swiss Confederation, United Kingdom of Great Britain, Sweden, Republic of Ireland, Iceland. Has 5 years of professorship at the University of Cambridge.

The diplomat, in turn, thanked the staff of his native university for the hospitality and said that he was thrilled to meet with the alma mater. The guest expressed his willingness to share his knowledge and experience with the leadership and teachers of the university in the implementation of common programs.

The meeting continued with a lecture on the topic "Formation and development of Kazakhstani diplomacy: N. Nazarbayev's model", in which the teaching staff and students took part in offline and online formats. 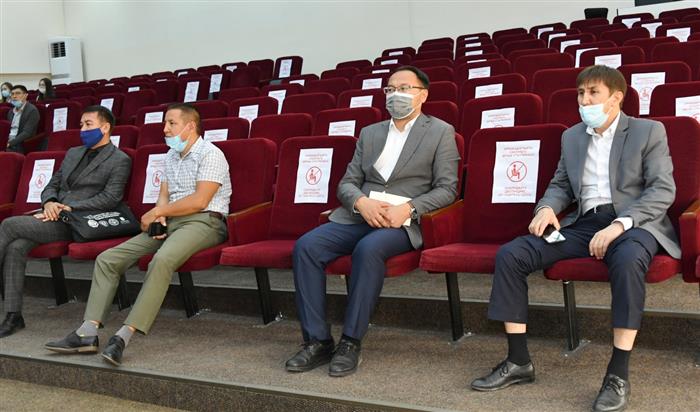 In his lecture, the statesman dwelled on the first important stages of the establishment of a new independent state. He especially noted that the First President of the Republic of Kazakhstan Nursultan Nazarbayev entered the stage of world politics with a peaceful initiative to close the Semipalatinsk nuclear test site. “The head of state called not only to abandon nuclear weapons, but also to disarm the world. The idea of ​​disarmament, set forth by the First President of Kazakhstan in the program resolution “Peace. XXI century "has become the main UN document on nuclear safety," said Kairat Kuatovich. The lecturer presented the selfless work and feat of Elbasy as a vivid example of patriotism, which not only laid the foundations of a sovereign country as a secular, legal and united state, but also ensured the entry of the young state into the international community. 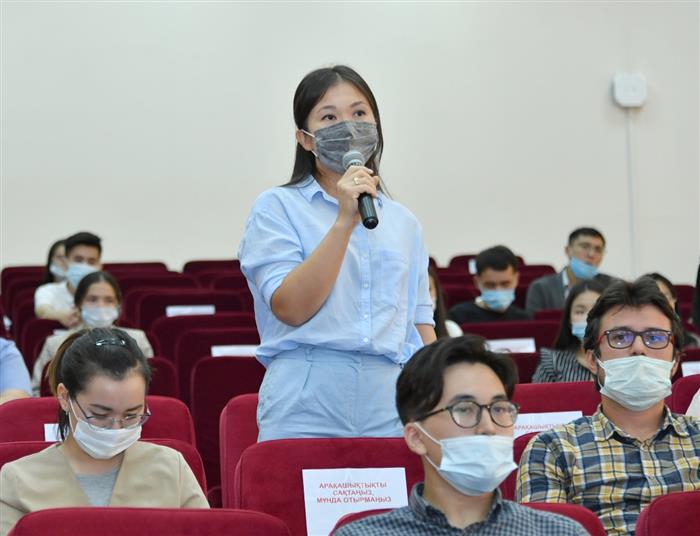 The speaker emphasized that the First President of the Republic of Kazakhstan took an active part in solving regional and global problems, proposed to the world community not one, but several projects to resolve the international situation. These projects are currently being implemented all over the world.

At the end of the meeting, teachers, doctoral students, undergraduates and students were able to ask questions related to the geopolitical situation in the world, showing great interest in the expert's opinion.

Also, within the framework of a visit to KazNU, an outstanding graduate visited the university museum and an exhibition dedicated to the 30th anniversary of Independence of the Republic of Kazakhstan and the country's diplomatic service. 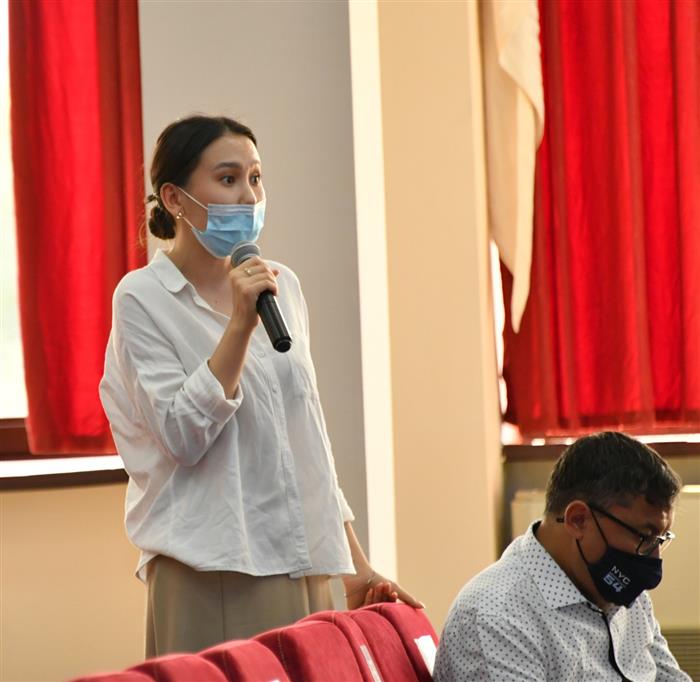