Harmony of the subsoil through the eyes of al-Mashani 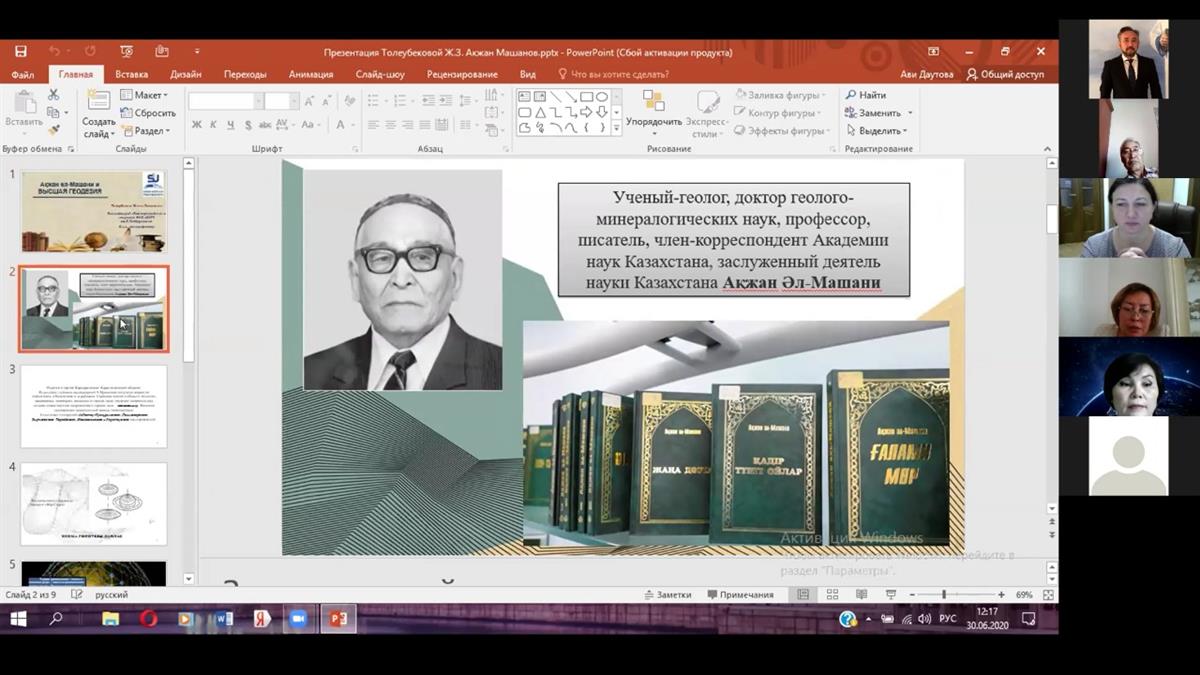 On June 30, 2020, the Al-Farabi Center and the Department of Cartography and Geoinformatics of the Faculty of Geography and Environmental Sciences organized and conducted a round table «Harmony of the subsoil through the eyes of al-Mashani», dedicated to the 1150th anniversary of Abu Nasr al-Farabi in online format.

Opening the round table, the Director of the Al-Farabi Center Bekzhan Meyrbaev, Candidate of Philological sciences, highlighted that the main purpose of the event is to expand the presentation of the prominent thinker, encyclopedic scientist, known throughout the world, the researcher of the works of Abu Nasr al-Farabi - al-Mashani.

The event was attended by the President of the Union of Surveying Companies of Kazakhstan, Doctor of Technical Sciences, Professor Nizametdinov Farit Kamalovich; Vice-Rector for Science of the Karaganda Technical University, Doctor of Technical Sciences, Professor Ozhigin Sergey Georgievich; Director of the Institute of Basic Education Mashani of Satpayev Universty, candidate of pedagogical sciences Sarenova Aigul Saparbekovna, as well as the son and great-grandson of the great scientist al-Mashani.

Scientists of the Institute for Integrated Subsoil Development named after Academician of the Russian Academy of Sciences (Moscow) N.V. Melnikov also took an active part in the round table, a particular resonance was made by the report of the head of the department of geomechanics, candidate of technical sciences Fedorov Evgeny Vyacheslavovich and Leading Researcher, candidate of technical sciences Militenko Natalya Alexandrovna on the topic «Harmony of the subsoil as the basis for sustainable development of the country's mining complex».

Disciples and followers of al-Mashani, as well as doctoral students and undergraduates, noted that for the first time the concept of «harmony of the subsoil» was found in the writings of Academician Vladimir Ivanovich Vernadsky, who maintained that there was strict order and complete harmony in the subsoil. The proportionality of the natural structural blocks of rocks that make up the geological structure, in geomechanics is called the harmony of the subsoil.

Academician V.I.Vernadsky did this statement reaching the origins of the emergence of science as in ancient Greece, which belonged exclusively to the thinker Aristotle.

It is worth emphasizing that Abu Nasr al-Farabi, a follower of Aristotle, is called the «second teacher».

Sharing the true opinion, the follower of the Great thinker Abu Nasr al-Farabi, Ajan Zhaksybekovich Mashanov AL-MASHANI, always emphasized that the law of harmony is the universal law of the structure of the earth's crust. Subsoil harmony means the correspondence between a mountain massif and its component parts, structural blocks of rocks that arose in accordance with the nature of the deformation of the massif composed of these blocks. This idea follows from the observation of numerous facts characterizing the conditions of occurrence of rock masses. And the system of cracks can be characterized as proportional, having a strict regularity, phenomenon.

A broad outlook and knowledge of the Arabic language allowed Akzhan Zhaksybekovich al-Mashani to do one of the great things - to open to the world the role of the great scientist Abu Nasyr al-Farabi.