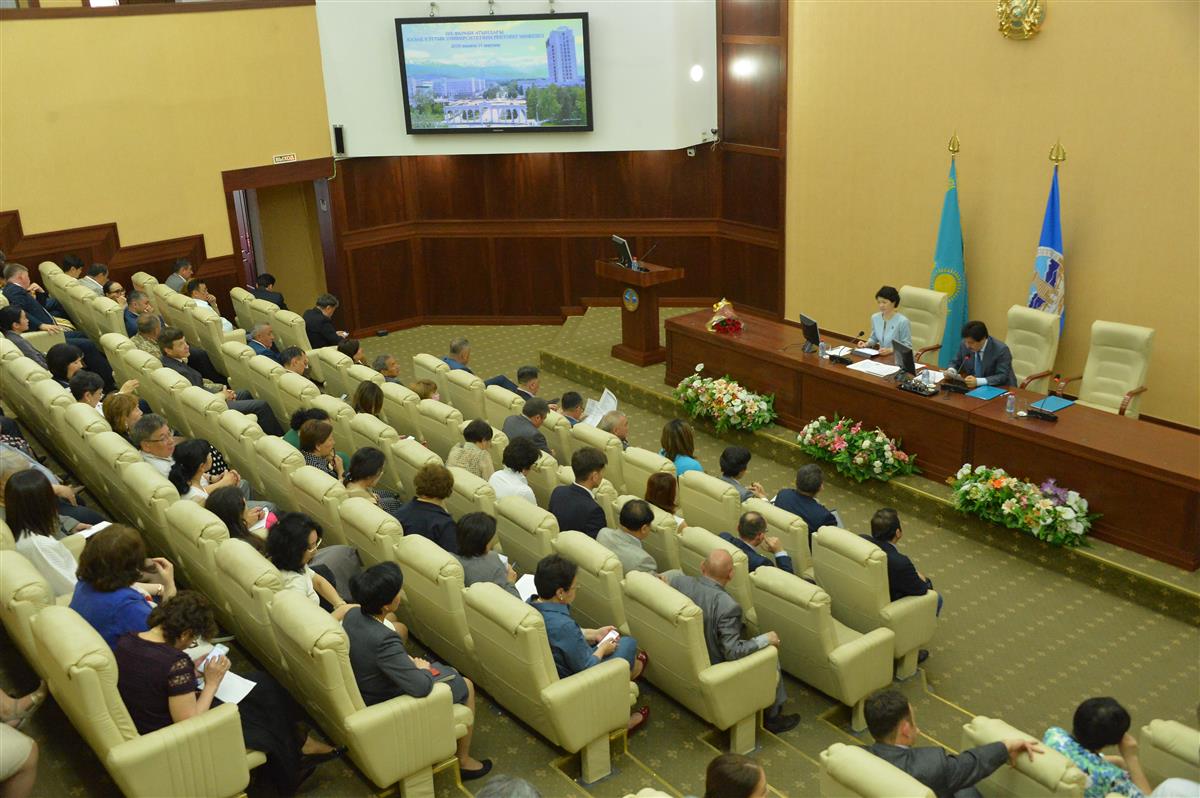 The team of Al-Farabi Kazakh National University has discussed the main provisions of the Address of the Head of State «Growing welfare of Kazakh citizens: Increase in income and quality of life». New initiatives of the President have been widely welcomed by teachers and students of country's leading University. Scientists mainly focused on the tasks in the field of professional training.

Opening the meeting, the Rector of Al-Farabi KazNU Galym Mutanov highlighted that the President has paid special attention to ensuring conditions for the qualitative growth of human capital. Bringing the expenditure on education, science and health care up to 10% of GDP will give a powerful impetus to key areas that determine social development of country.

Requirements to the quality of training in Kazakhstani HEIs are increasing. In this regard, it should be noted that Al-Farabi KazNU has been implementing a new generation university model - «University 4.0», which is designed to provide a new quality of education.

KazNU has introduced fundamentally new educational programs in the framework of state development programs aimed at modernizing the economy and training for industry 4.0 from this academic year, including E-Commerce, Digital Linguistics, Big Data, Artificial Intelligence, Geoinformatics, Internet of Things, Bioinformatics and etc. MA Program on Islamic Finance was launched jointly with the AIFC and the University of Hamad bin Khalifa (Qatar). As part of the implementation of the Digital Kazakhstan program, KazNU for the first time in a CIS scale has formed a Digital University Model and introduced cloud technologies to automate University activities, smart technologies in campus infrastructure management, and a Big Data technology to form an analytical system. The National Open Education Platform of Kazakhstan that was initiated and developed by KazNU enhances the competitiveness of Kazakhstani universities. For the first time in Kazakhstan and the CIS, Al-Farabi KazNU has launched a Postdoctoral program that allows to form strong research groups competitive in the global scientific and educational space.

Implementing the idea of ​​the Head of State, the University has been working on creation of International IT-Technopark, and the Supercomputer with a high performance, which is the government grant from the PRC, will form it nucleus. Its implementation was supported by more than 130 universities of the world that are members of the New Silk Road University Alliance.

As a result of discussion, the Academic Council of University adopted a comprehensive roadmap for implementing the Address. It provides fulfillment of presidential instructions, including the creation of a comfortable environment at the student campus, improvement of wage system based on ranking, release of import-substituting high-tech products and the provision of high-tech services, as well as conducting professional diagnostics of schoolchildren and much more.