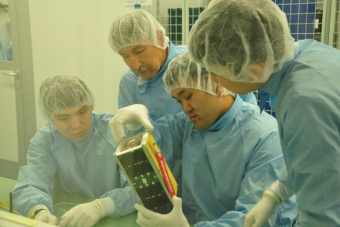 Al-Farabi KazNU and the University of Tokyo are planning to implement a joint project to develop and create a new nanosatellite for sensing the earth.

This was stated during the negotiations between KazNU leadership and Tokyo University professor, a member of the national committee on space policy, Mr. Shinichi Nakasuka.

According to the rector of KazNU, academician Galym Mutanov, for many years there has been a steady and fruitful cooperation between the universities of the two countries, which contributes to the successful implementation of many projects and programs in the field of science and education. KazNU also maintains stable and strong contacts with large organizations and companies in Japan, such as: the Atomic Energy Agency of Japan, Chiyoda Technol Corporation, the Japan Foundation, the One Asia Foundation, Konica Minolta, etc.

It should also be noted that in the course of collaboration with the universities of the Land of the Rising Sun within the framework of the UNIFORM program, master course and doctoral students have successfully completed training at the University of Tokyo and Wakayama and participated in the assembly and testing of the UNIFORM microsatellite. So, thanks to the knowledge gained, last year, within the framework of the International Consortium of the UNIFORM Project, the second nanosatellite «Al-Farabi 2» was launched from a spaceport in California (USA). The first student nanosatellite” Al-Farabi 1 “was successfully launched on February 15, 2017 from the Indian cosmodrome Satisha Dhavana.

As it was noted during the meeting KazNU is working to create a national scientific school in the field of space technology, design, training highly qualified specialists in the framework of the international consortium UNIFORM.

During the talks, the parties discussed the main areas of cooperation and work plans for the creation of a new nanosatellite with the earth sounding control system. Student space project is designed for two years.