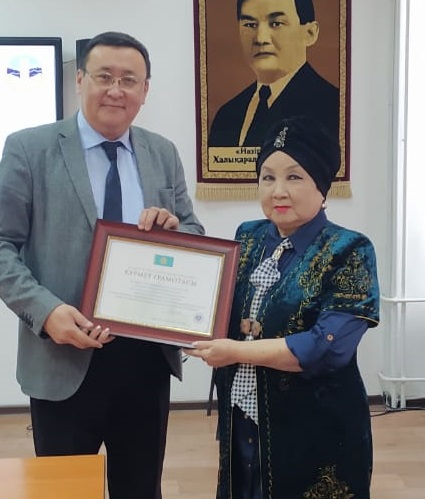 By the decree of the President of Kazakhstan Makisheva M.K. was presented the Scroll of Honour

Scientific activity of teachers in the department is marked by different honors, awards etc.

Professor K.N. Shakirov is a corresponding member of the European Academy of Law, awarded the medal “10 years of the Constitution of the Republic of Kazakhstan”, diplomas and certificates of the Rector of the al-Farabi Kazakh National University and the Rector of the Academy of Jurisprudence - Higher School of Law “Adilet”.

Professor A.S. Baitukayeva was elected and awarded an honorary academic title of Corresponding Member of Russian International Academy of Sciences. She was awarded the badge at the 75th anniversary of the al-Farabi KazNU and a diploma of merit in the development of education, science, and social activities, also she was awarded the Gratitude of Rector of KazNU G.M. Mutanov for her contribution to educational work, and active participation in the celebration of the 20th Anniversary of the Independence of the Republic of Kazakhstan.

Associate professor Boribaeva S.B. was awarded the badge at the 75th anniversary of the al-Farabi Kazakh National University and Honorary diploma of KazNU Rector G.M. Mutanov for her contribution to educational work.

Conferences and Events under the Anniversary

Contests under the 25th Anniversary

Congratulations on the 25th anniversary of the faculty