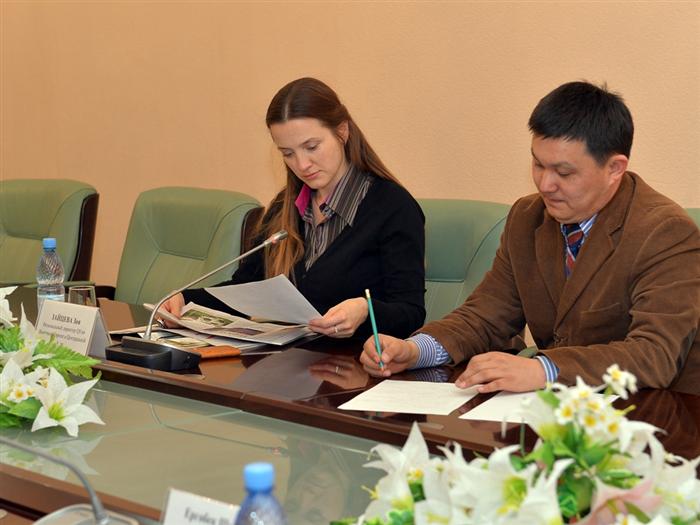 The meeting of the Eastern Europe and Central Asia QS (United Kingdom) Regional Director Zoya Zaitseva with university management was held in KazNU. The meeting discussed key issues of activities of the university to improve the university rating indicators. Zoya Zaitseva highly assessed the activities of KazNU for the last 3 years and stated that the unique approaches of KazNU on world rating improvements were mentioned as a standard model at many international seminars, which are held by QS. Of special interest is the experience of the University on the implementation of results-oriented management, internationalization strategies and the active support of publication activity of scientists. The experience of the University is studied and adopted by many universities of CIS and CA. During the familiarization with infrastructure facilities of KazNU, Zoya Zaitseva was convinced that the further commitment of the university to enter the top 200 best universities in the world is provided by the implementation of large-scale research projects and networking with international organizations on current issues. In her opinion, the opening of the KazNU Medical Center in association with Korean leading universities and school of public healthcare (SPH) became a great piece of work for research and higher education institution. The fact that KazNU became the global hub of UN on academic impact, the opening of KazNU centers in academic institutions of Germany, Japan and Pakistan, joint scientific research laboratories with world companies, such as Samsung, HP, Microsoft, etc. within the campus, confirm the recognition of higher scientific potential, growing academic influence and reputation among employers. Full international accreditation of educational programs with the European Agencies and cooperation with ACCELS and Erasmus Mundus contribute to attract foreign students. As the Eastern Europe and Central Asia Regional Director Zoya Zaitseva emphasized: «Kazakhstani higher education has a chance to be a study-destination country (a place for getting an education) or «magnetic place» for foreign students. The potential of current activity area of the university is large enough and that will positively influence on the qualitative and quantitative indicators during the evaluation of university rating in general».