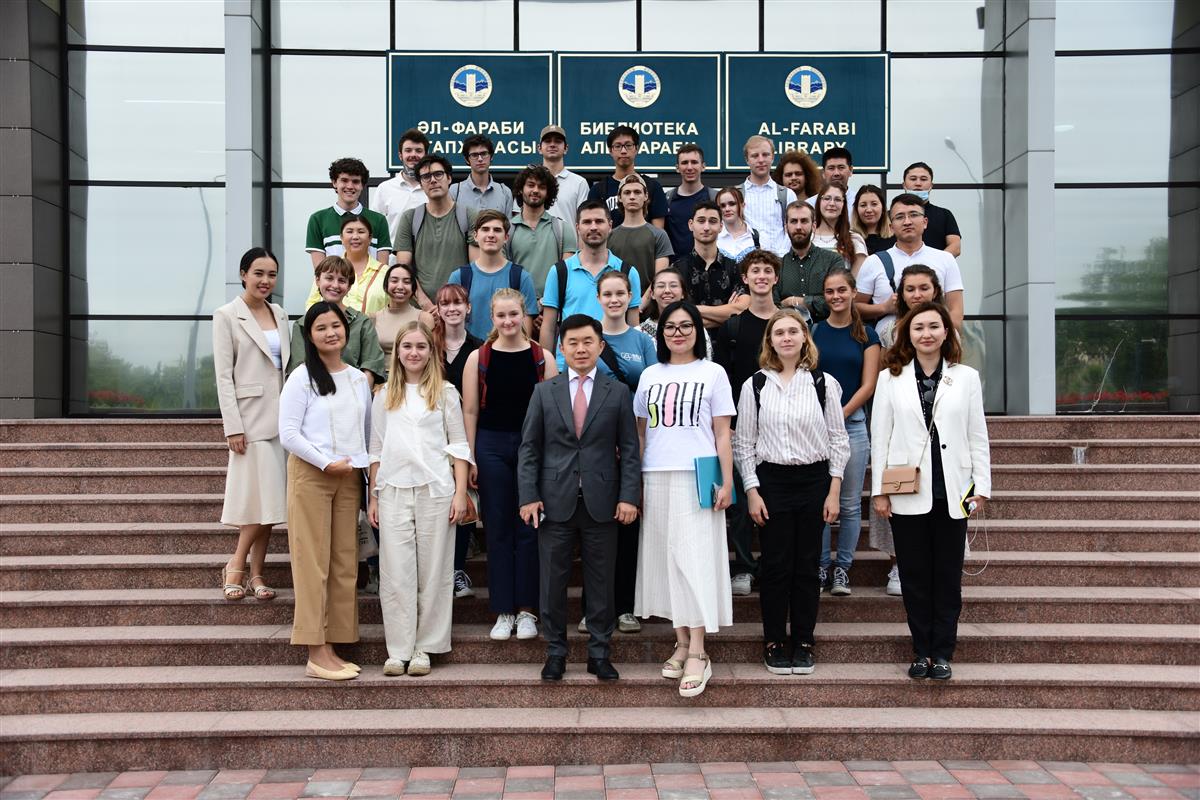 A meeting with foreign students studying at the Summer School was held at the Al-Farabi Kazakh National University. It was attended by the university administration, teaching staff and students from the USA, Yemen and China.

Foreign students visited museum of KazNU and got acquainted with the history of the university. The program of further development of the leading university was presented to foreign guests. The event was opened by Asel Ualieva, a member of the Board – Vice-rector for Operations of KazNU. "Al-Farabi Kazakh National University has the status of a research university combining education, science and innovation. = This year, the university rose by 25 positions and took the 150th place in the international ranking of QS WUR. KazNU is also the only university in Central Asia that has been highly appreciated for outstanding achievements in the QS stars rating system," the vice–rector noted.

Currently, 2,300 international students from 52 countries are studying at the university. Last academic year, more than 100 foreign professors gave lectures and conducted joint research at KazNU. The university cooperates with more than 500 of the best universities and research centers in the world. The University has 120 dual programs and 19 joint academic programs with research institutes. Within the framework of the international Erasmus+ program, 39 projects have been developed with universities in Spain, France, Romania, Turkey, Lithuania, Great Britain and other foreign countries.

Member of the Board of KazNU – Vice-Rector for Social Development Nurzhan Aydossov and Chairman of the Committee of Youth Organizations Madina Iskakova also made presentations at the meeting.

During the meeting, foreign youth shared their impressions. Lily Elliasevich from the USA said: “The Summer School program at KazNU has made a great contribution to the development of language training. We are completely immersed in the Russian speaking environment. The Summer School program promotes cultural exchange and communication with university students. It helps to get acquainted with local society”.

Student of Stanford University, Andrew Kelmanson stated that during this time at the university he gained a lot of experience. "KazNU had a special influence on my study of the Russian. I would like to note the work of highly professional, caring and dedicated teachers. This is because the teaching staff helped us quickly adapt to the new environment and culture. I really liked Almaty and KazNU. I notice that I have "grown up" abroad and KazNU made a great contribution to this. I have very good and warmest impressions about Kazakhstan. I will never forget this wonderful experience and hope to come back again," says Andrew.

It should be noted that the Flagship program has been implemented since 2015 on the basis of the Center for American and Democratic Studies at KazNU. Currently, 45 students from the USA are studying under the Flagship program initiated by the American Council on International Education and the Faculty of International Relations of KazNU. In addition, 18 students from China, the USA, Yemen and Afghanistan study Kazakh and Russian at the Faculty of Pre-university Training of the Bologna Process Center.