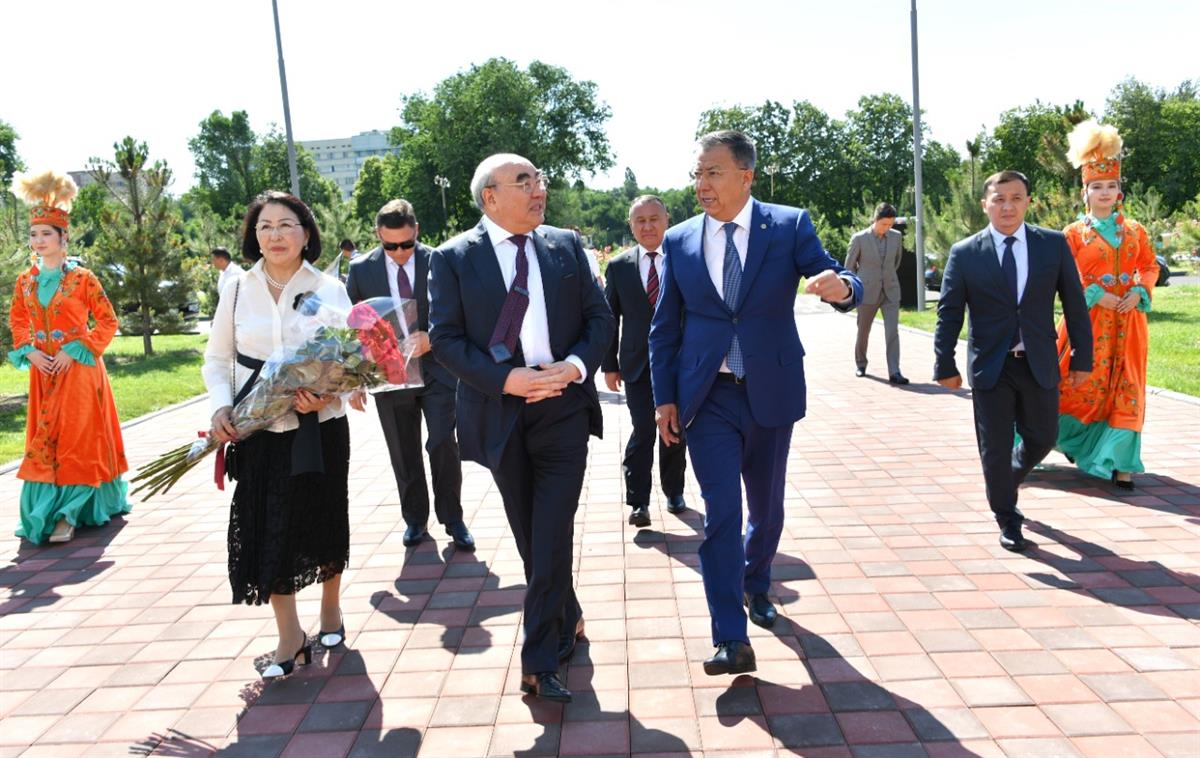 Al-Farabi Kazakh National University was visited by the First President of the Kyrgyz Republic, Academician of the Russian Academy of Sciences, Chief researcher of the Institute for Mathematical Research of Complex Systems in Lomonosov Moscow State University, Professor Askar Akayev.

During his visit, Academician Askar Akayev delivered a leadership lecture on the topic of "Demographic dynamics since ancient times and the future of mankind", and also got acquainted with the modernization plan of the KazNU.

Prominent state and public figures, famous academics, scientists, writers, heads of research institutes, members of the Board of Directors of KazNU, media representatives, faculty and students of the university attended the large-scale event.

Welcoming the guest of honor, Chairman of the Board Rector of Al-Farabi Kazakh National University Zhanseit Tuimebayev spoke in detail about the work of Askar Akayev and noted that he had made a huge contribution to the development of science.

"Askar Akayev is a very educated and intellectual person. He is an extraordinary individual, a world–renowned scientist. In Kyrgyzstan he created the Kyrgyz scientific school on computational optoelectronics and holography, from which dozens of doctors and hundreds of candidates of sciences graduated. Askar Akayevich has formed his own scientific school of analysis and forecasting of political, economic and social problems in the world. He conducted in-depth research with leading scientists from Russia, the USA, Japan and Europe. He is the author of more than 400 scientific articles and 15 books," the rector of KazNU stated in his speech.

At the end of his speech, Zhanseit Tuimebayev solemnly awarded Academician Askar Akayev with the title of Honorary Professor of Al-Farabi Kazakh National University.

Expressing his gratitude to the management and staff of the university for the warm welcome, Askar Akayev stressed that he was glad to visit KazNU again after 45 years.

"I am very happy about our meeting today. KazNU is the best university in Central Asia. Many higher education institutions need decades to achieve such favorable result. I am sure that the KazNU will adequately respond to all the demands of the time," Askar Akayevich emphasized.

During the lecture, Professor Askar Akayev gave a broad definition of the concept of "demographic transition". He also highlighted the role of demographic changes in the history of the countries of the world, its causes and consequences. According to the lecturer, the rapid decline in fertility and mortality can lead to fundamental changes and the process of renewal of human generations.

"Over the XX century, the world's population has increased four times, the world GDP has grown almost twenty times. Demographic transition, as a rule, was accompanied by significant scientific and technological progress, the growth of productive forces, the rise of culture and education, as well as the migration of large masses of the population from villages to cities. There is no doubt that demographic dynamics remains the main driving force of world development in the first half of the XXI century.

The scientist noted that the beginning of the XX century was marked by the greatest scientific and technological revolution. The rise of innovative technologies that were created by the middle of the century includes nuclear power, quantum electronics and laser technologies, electronic computers and automation of production; jet and rocket engines, global satellite communications and television. By the end of the XX century, a revolution in microelectronics, information and communication technologies took place, which at the beginning of the XXI century was transformed into a revolution of digital technologies.

Askar Akayev also elaborated his thoughts on the future of humanity, the achievements of civilizations and its impact on society.

The scientist answered the questions of the teaching staff and shared his experience in science.

Then Askar Akayevich solemnly presented the diploma to the doctoral students who graduated with honors from Al-Farabi Kazakh National University, wishing them a happy journey through their professional career.

On June 21, Academician Askar Akayev will host the second lecture of on the topic of "Digital Economy :models and forecasts" at the Palace of Students named after O. Zholdasbekov, where the scientist will share his vision of the present and future of the digital economy, as well as introduce his projects and researches.