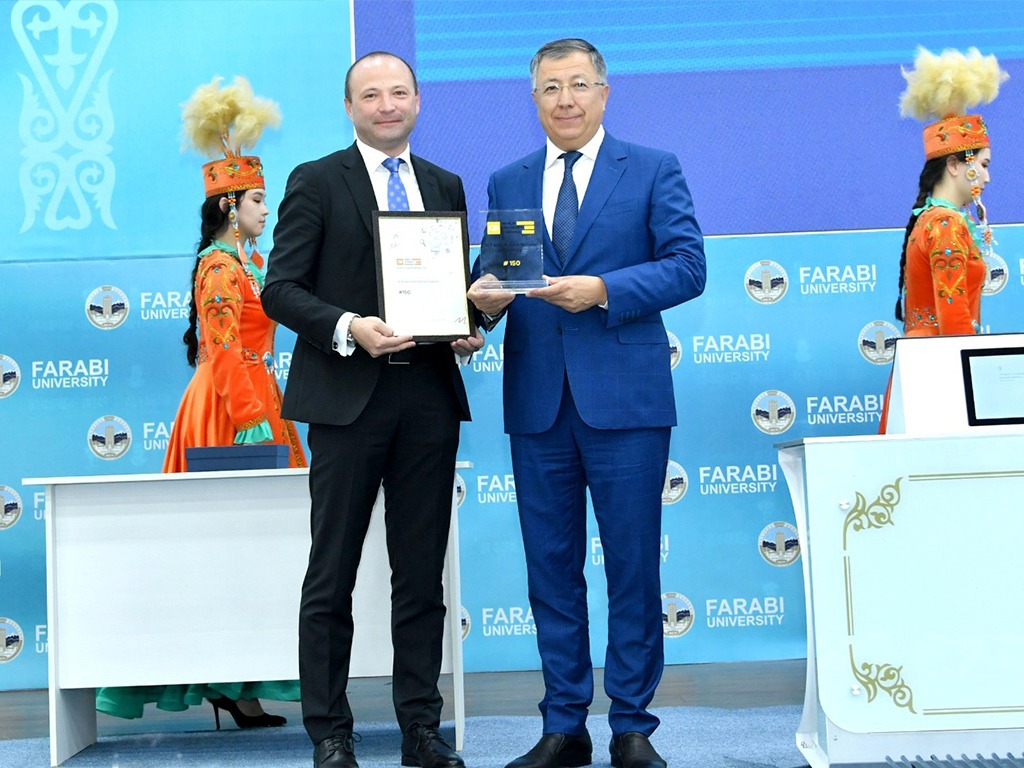 According to the results of the QS WURS global ranking published on June 8, 2022 Al-Farabi Kazakh National University took the 150th place. In this regard, a solemn Ceremony of Awarding a commemorative badge and the certificate of the QS WUR was held at the Al-Farabi Library.

QS Regional Director for CIS and Central Asia Sergey Hristolyubov presented the award to the Chairman of the Board – Rector of Al-Farabi Kazakh National University Zhanseit Tuimebayev.

While congratulating the management and staff of the higher educational institution, Sergey Khristolyubov noted that KazNU has achieved high result for the first time in its history.

"The 150th place in the QS WUR rating is a great indicator and an outstanding achievement. I would like to express my gratitude to all the faculties, departments, scientists and professors who worked to improve the university's performance. You have achieved amazing results in terms of academic reputation. Such results are proved by facts and statistics. Thanks to your collective work, you have become one of the best universities in the world. I congratulate you and wish you fruitful work," said Sergey Khristolyubov, QS Regional Director for CIS and Central Asia.

During the Award Ceremony the head of the university Zhanseit Tuimebayev highlighted that the QS rating has become a strong platform for Kazakhstani universities, which provides a firm motivation for further improvement of university performance.

“Our university moved up from 175th place by 25 positions and got into the top 150 best universities in the world in one year. Currently KazNU is the only university in Central Asia that has received "Five stars" of excellence in the "QS Stars Rating System". Moreover, the university is on the top of the best in 4 subject areas and 16 areas of training in the QS by Subject ranking. This proves the high competitiveness of the university's 137 educational programs at the international level. This is the result of long-term daily work of the entire university staff. It is a great honor and responsibility for us," the Rector of KazNU mentioned in his speech.

In addition, during the event local professors and visiting researchers congratulated the KazNU staff on the Award. Professor of the Faculty of Chemistry and Chemical Technology Zulkhair Mansurov, Professor of the Instituto Universitário de Lisboa Postolah Octavian, Director of Higher Education Programs in the organization American Councils for International Education Graham Hettlinger, Doctor of the University of the District of Columbia Mamata Hanumappa, Senior Lecturer of the Faculty of Chemistry and Chemical Technology Gemil Ahmad, Doctor of Physics-Mathematical Sciences of Sumy University Alexander Pogrebnyak, professor of the Department of Clinical Disciplines Muzzammil Ilahi and the PhD student Arifioglu Abdurrahman; all expressed their warm wishes.

It is important to note that the list of QS ranking has been published since 2004. This year about 2.5 thousand universities from 100 countries have participated in the QS global ranking.