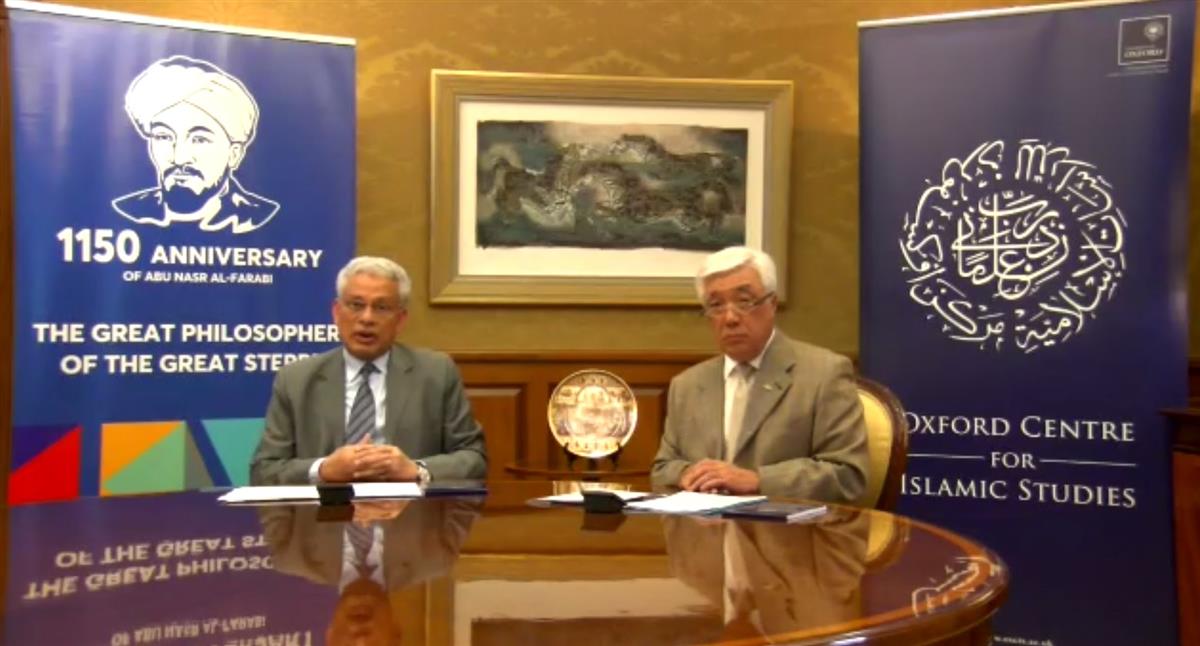 Al-Farabi KazNU together with the Embassy of the RK in Great Britain and Oxford University has held an international scientific symposium «Al-Farabi: His Life and Heritage», dedicated to the 1150th anniversary of the great scientist of mankind. Famous scientists and farabiologists from the USA, Germany, Great Britain, Kazakhstan and other countries, have attended the event, which was conducted in online format.

The ingenious legacy of the great thinker Al-Farabi, which had become a connecting spiritual bridge between West and East, is becoming increasingly relevant today. As part of the celebration of Al-Farabi’s 1150th anniversary, the heritage of the great thinker has once again served as a virtual dialogue platform for scientists from different countries and continents.

As the main organizer of the symposium, Ambassador of the Republic of Kazakhstan to the United Kingdom Erlan Idrissov highlighted in his welcoming speech, reference to the spiritual heritage of Al-Farabi is of great importance in today’s world, especially in the context of the pandemic and profound changes in the global economy and politics. The teachings of Al-Farabi bear the ideas of unification and cooperation to achieve a virtuous and perfect society, which are especially relevant today, when the world is facing new threats and challenges.

The key speaker at the symposium was the Rector of Al-Farabi KazNU, academician Galym Mutanov. He noted that modern Universities should become conductors of Al-Farabi’s important idea that obtaining knowledge is only part of the educational system, the core of which should be spiritual and moral education of personality. In this regard, KazNU, as the UN Global Hub, has developed and implemented a model of a new generation HEI – «University 4.0». Its main mission is to train highly qualified specialists as citizens of the country and the world, who are responsible not only for their personal destiny, but also for the future of all humanity. The model presented at the UN Headquarters and recommended for wide dissemination, is being implemented today at the international level jointly with the UN Alliance of Civilizations and Al-Farabi Centers established in 12 leading HEIs of the world.

Farhan Nizami, Director of the Centre for Islamic Studies at Oxford University, emphasized in his speech the relevance of Al-Farabi’s intellectual heritage to the modern world. Working in the «Golden Age of Islam» to study various scientific fields, the great scientist had left a rich creative heritage, which is a great treasure for all humanity. «We are proud of our cooperation with KazNU, which bears the name of Al-Farabi. We have much to explore together to arm ourselves with the teaching of the great thinker. I hope the symposium will find its continuation in strengthening academic and scientific relations with Kazakhstan as a whole», - said Dr. Farhan Nizami.

Peter Adamson, Professor at the Ludwig-Maximilian University of Munich, continued the discussion of Al-Farabi’s teaching on virtuous society. Professor of Cambridge University Feriel Bouhafa analyzed the ontology of good and evil in the philosophy of the great scientist. Saida Daukeeva, ethnographer and expert in the theory of Arabic music, Professor at the Wesleyan University (USA), spoke about the important role that Al-Farabi played in the development of music, his research and scientific works in this direction.

As the participants of the online symposium noted, holding such events not only promotes the heritage of the great Al-Farabi, but also paves the way for building a virtuous world.