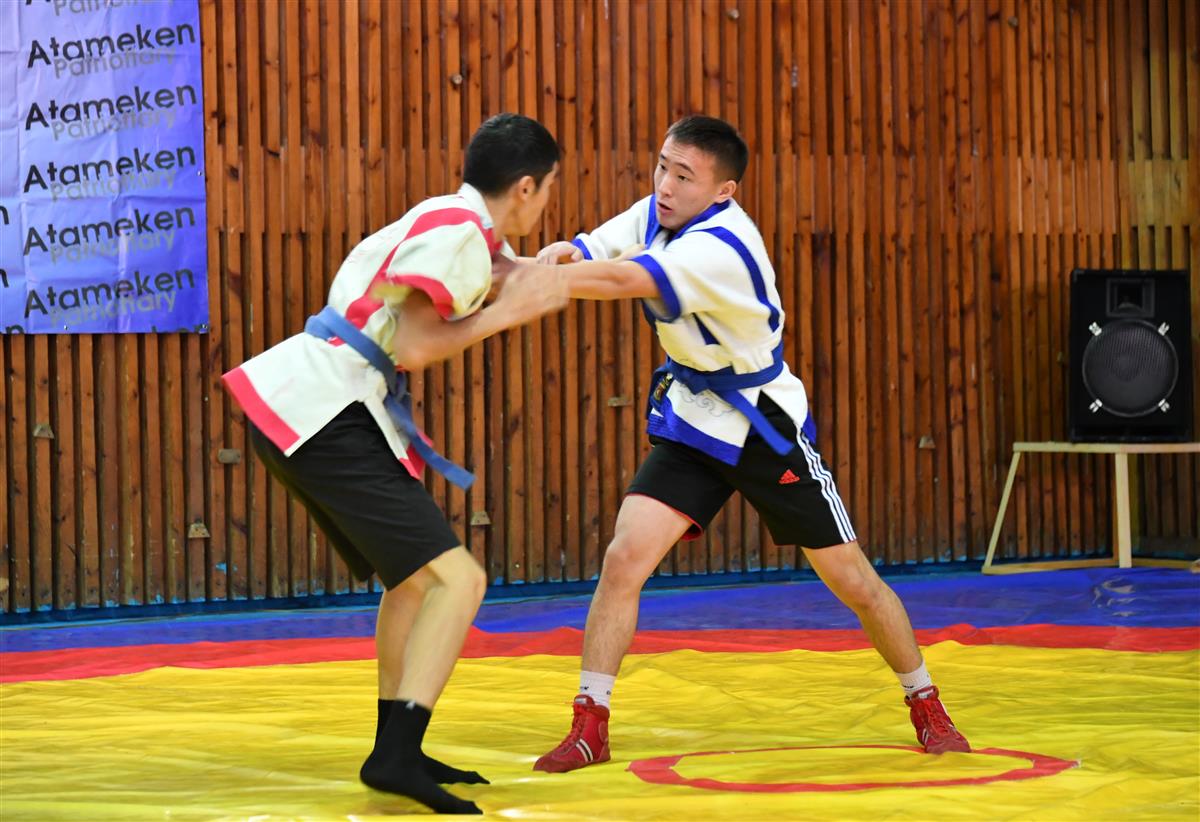 The First Kazaksha Kures wrestling tournament «KazNU's Barys - 2019», dedicated to the 85th anniversary of the University, was held at the sports complex of KazNU. The organizer of the competition was the student patriotic club «Atameken».

KazNU is famous for its wrestlers. The University sports complex has the sections on freestyle wrestling, judo, sambo, sumo and kakaksha kures. Experienced instructors instill in young people self-defense skills, teach techniques of various types of wrestling. Our students are turning into real horsemen, courageous and strong. And this was proved by the tournament «KazNU's Barys», which was held at KazNU.

«This is a serious competition, more than 150 University students took part in it, including 4 international-class masters of sports, 15 masters and 50 candidates for master of sports. In the future we plan to organize a tournament among the Universities of the country. We are sure that the national team of KazNU will adequately perform at the spring Universiade», - emphasized the coach of the Kazakhsha kures section Fayzolla Koyshimanov.

We talked with the participants of the tournament. Yernur Togzhanov, a second-year student of the Faculty of Information Technology, won the match and, in a good mood, shared his impressions: «I am very glad that I am taking part in the competition. For the past three years I have been engaged in the Kazakhsha Kures section. I have prepared for the tournament for a long time. The victory in this match inspired me, and now I am ready to fight further. I believe in my strength and hope to win».

While Kurban-Ali Khalil, a 2nd year student of the Department of Chemistry and Chemical Technology, was still waiting in line, worried about the outcome of the match. «I have a lot of experience in different types of wrestling,» said Kurban-Ali. - Our University has sections of sambo and judo. I managed to try everything, took part in competitions, in the Asian Championship, I have the rank of CCM judo. For two years I have been doing Kazaksha kures. The rules are similar, but there are differences. And Kazakhsha Kures, in my opinion, is more complicated. I hope that I can win».

The tournament ended with an award ceremony for winners, who received valuable prizes. In the weight category up to 75 kg. the places were distributed as follows: Marat Nigmatullaev took the 1st place, becoming the owner of the title «KazNU's Barys», the 2nd place was taken by Daulet Nietbay, Eldar Akylzhan and Askar Narkulov shared the 3rd place.

Aslan Sagimbek became the holder of the title «KazNU's Barys» and the 1st place in the weight category over 75 kg., the 2nd place was taken by Erzat Argynov, and the 3rd place went to Aydos Rakhmetov and Aydin Berdikulov.

«For the first time, we held a tournament together with the Kazaksha Kures Federation of the Republic of Kazakhstan,» summed up the President of the «Atameken» youth patriotic club, a 4th year student Nurbolat Umirkhanov. - This is a wonderful sporting event, the purpose of which is to develop the national wrestling of the Kazaksha Kures in our University. Wrestlers during the day participated in the preliminary qualifying round. The strongest were able to break into the finals, as a result, the winners were determined, whom we awarded. But most importantly, the participants showed perseverance, willpower and a true sporting spirit in the pursuit of victory. In March next year, a big tournament is planned to be held as part of the spring Universiade, the winners of this tournament will take part in it».