«I BELIEVE IN YOUTH»

The Republican Youth Forum «MEN ZHASTARGA SENEMIN», dedicated to the Day of the First President of the country, was held at Al-Farabi KazNU in Almaty. The results of the large-scale Youth Forum’s contests, which are aimed at developing patriotism through the prism of innovation and creativity, were summed up and the winners were announced at the award ceremony.

The organizers of the grand event were KazNU and the Akimat of Almaty with the support of the Ministry of Education and Science of the Republic of Kazakhstan, the «Zhandanu Alemi» Foundation of the «Zhas Otan» youth wing, the Writers’ Union of Kazakhstan and «Kazakh Radiosi».

The Forum has been held at KazNU since 2013. As part of this annual Republican event, competitions are held for the best student innovation project «My Real Contribution to the Innovative Development of Kazakhstan», the best essays «What can I do for the prosperity of my country», the best poetic work and song on a patriotic theme. In the Year of Youth, new contests were added within the Forum for the best project to promote the principles of integrity and the best creative work dedicated to the 85th anniversary of Al-Farabi KazNU.

The growing number of projects and creative works annually received by the organizing committee evidences the relevance and popularity of the Forum. It has become a significant platform across the country aimed at developing patriotism, civic responsibility and youth potential.

This year, the organizing committee received over 1,500 applications for contests from students from more than 100 universities from all regions of the country. Among them are both individual projects and works, as well as the works of collective creativity. An independent jury from among authoritative experts - public figures, representatives of business, government agencies, the media, scientists, and culture and art workers selected 620 best works, the authors of which were invited to the Forum.

Vice Prime Minister B.M. Saparbayev, Minister of Education and Science of the Republic of Kazakhstan A.K.Aymagambetov, Minister of Information and Public Development D.A.Abaev, First Deputy Chairman of the Anti-Corruption Agency of the Republic of Kazakhstan O.A.Bektenov, Deputy Akim of Almaty E.Zh. Babakumarov, Rector of KazNU Academician G.M. Mutanov, well-known public and government figures, students and working youth from all regions of the country took part in the award ceremony.

Addressing the Forum participants, the Deputy Prime Minister of Kazakhstan, Berdibek Saparbayev, emphasized that 2019 was declared the Year of Youth at the initiative of the First President of the Republic of Kazakhstan. This is a manifestation of the state’s great and special care for the young generation, which is a significant and active part of the country, a carrier of intellectual and creative potential.

«Young people have a lot of energy and talents. They take an active part in the formation and development of Kazakhstan. The task of the state represented by the Government is to create conditions for Kazakhstani youth to receive a decent education that meets all international standards and to fully realize their potentials», - said Vice Prime Minister.

He also noted that the President of the country, Kassym-Jomart Tokayev has declared the next year as the Year of Volunteering. It will take the torch as a continuation of the Year of Youth. Moreover, this is symbolic, since it is known that young people participate in the volunteer movement. According to the Deputy Prime Minister, everyone should think about what contribution one made to the development of his or her country. Only then, there will be a result.

Minister of Information and Public Development Dauren Abayev made a welcoming speech to the Forum participants: «KazNU is not only the educational flagship of our country. KazNU is more than a University. Here is a special aura and energy, in the wake of which you learn friendship, self-realization, and creativity, realize the value of kindness, mutual understanding and love for your Motherland. Today’s event is a confirmation of this. In this hall gathered the young people, who study and work in a free and independent country. I am an optimist, therefore, I agree with the great Kazakh poet and say: «Men zhastarga senemіn!». This faith did not come out of nothing».

The paralympic, winner of the project «100 new faces of Kazakhstan» Serik Esmatov made an inspirational speech: «You know the story of my life and my success. Moreover, you realize that my path to success was not easy. After all, despite the fact that at the age of 13 I lost my legs, I did not lose myself, faith in my strength and love of life. As a patriot of Kazakhstan, I strive to prove with my example that you can also achieve great success. All in your hands! We are youth: the future of Kazakhstan. I want to wish the Forum participants new heights and creative achievements».

Winners and prizewinners of the competitions were awarded with diplomas and valuable prizes. The first place winners received a grant for one year of free education at Al-Farabi KazNU. The creative works of the contestants will be published in a special collection. The Forum ended with a vivid concert and performance of patriotic compositions. 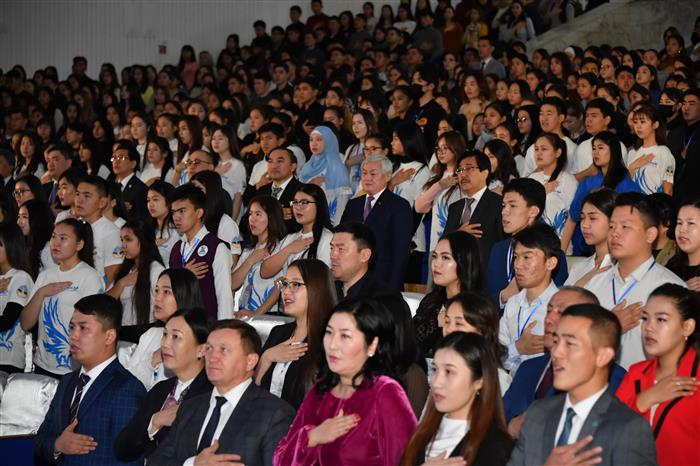 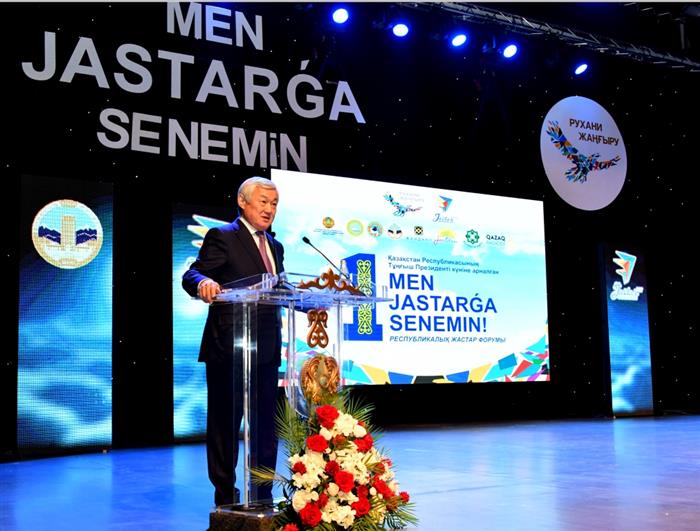 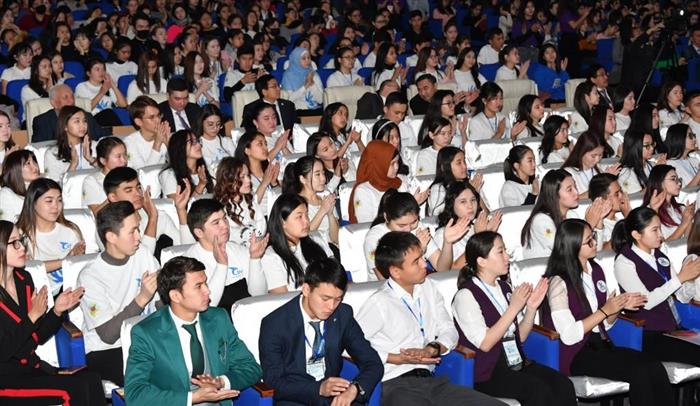 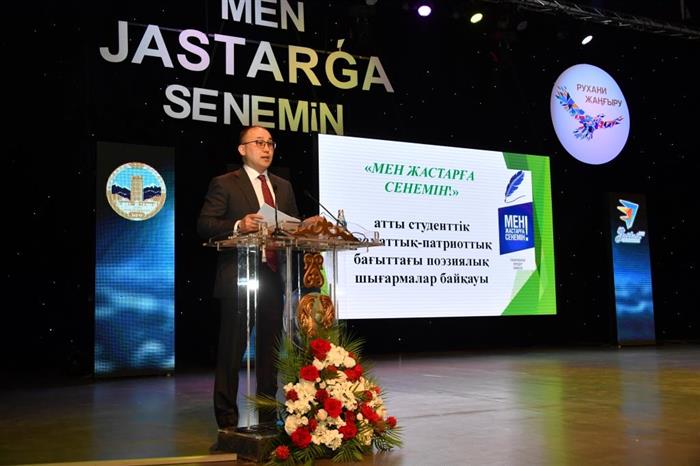 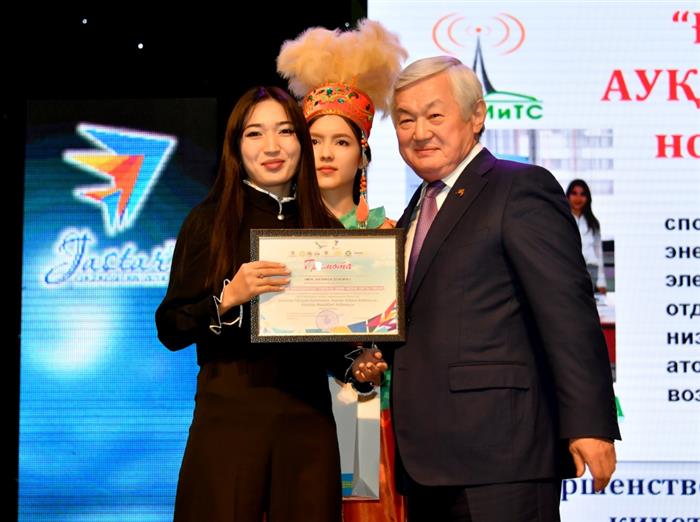 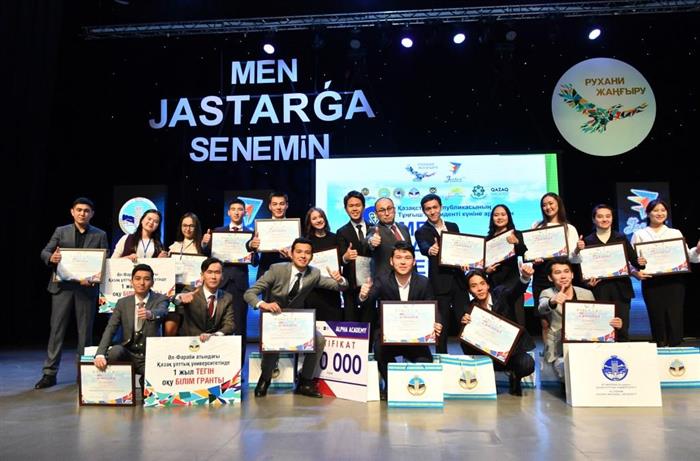 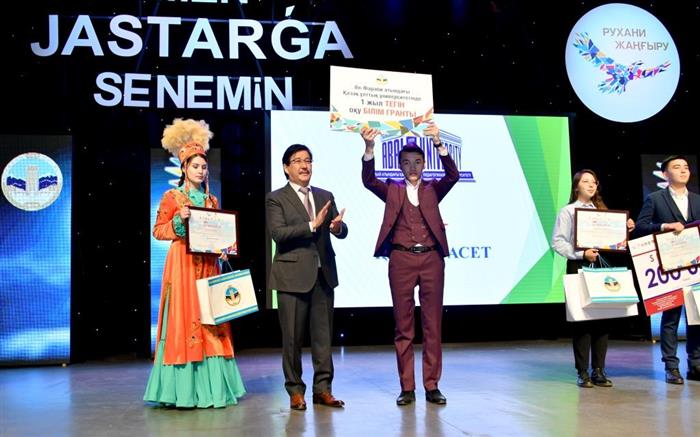 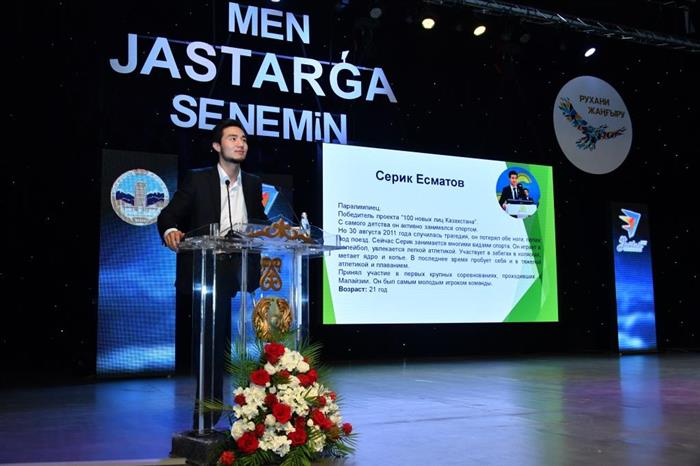