«I BELIEVE IN YOUTH» 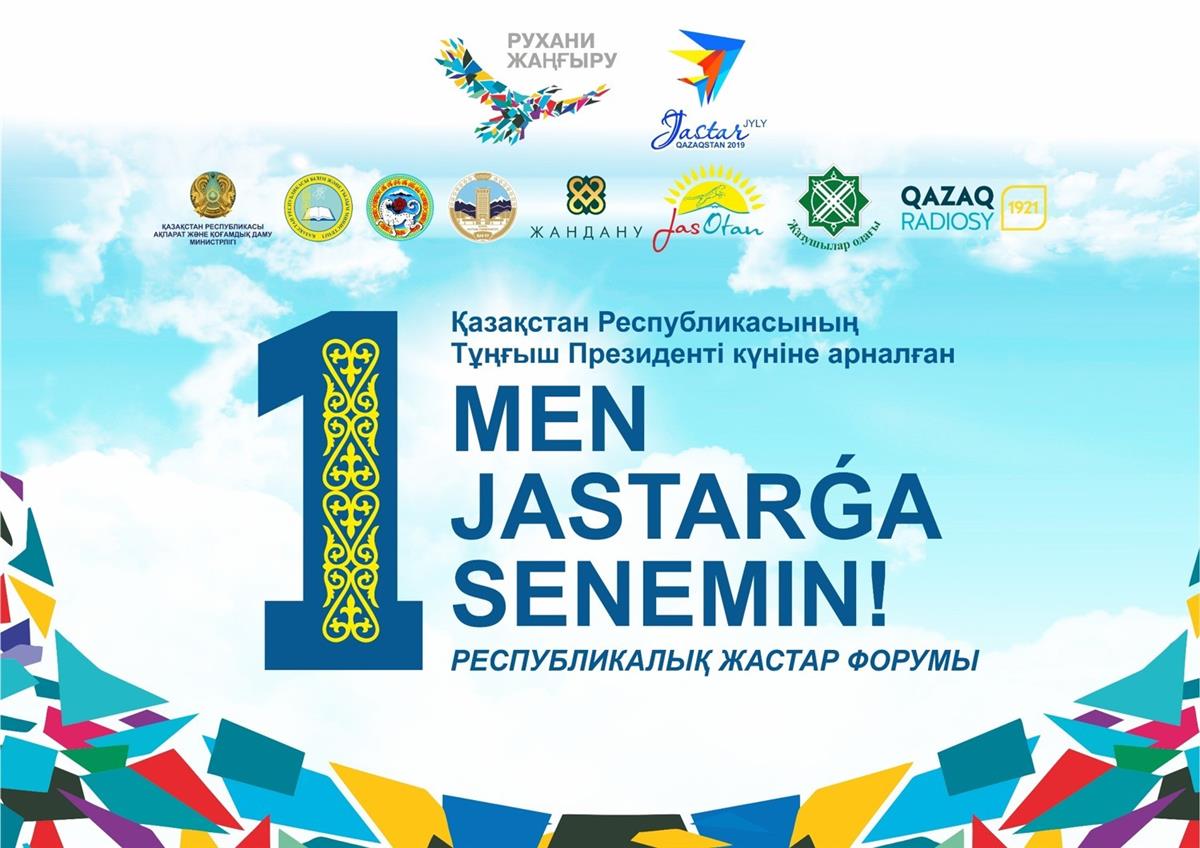 The Republican Youth Forum «Men Zhastarga Senemіn!» dedicated to the Day of the First President of the Republic of Kazakhstan will be held on November 15, 2019 at Al-Farabi KazNU. The large-scale event will be organized by KazNU and the Akimat of Almaty with the support of the Ministry of Education and Science of the Republic of Kazakhstan, the «Zhandanu Alemi» Foundation, the «Zhas Otan» youth wing, the Kazakhstan Writers Union and «Kazakh Radiosy».

At the initiative of the First President of the Republic of Kazakhstan-Elbasy 2019 is declared as the Year of Youth. This is a manifestation of the state’s great and special concern for the young generation, which is a significant and active part of the country, a carrier of intellectual and creative potential. The prosperity of the country depends on how young people contribute to the development of Kazakhstani society. It is important that every young person asks themselves: «What can I do for my country?» Therefore, the main goal of the Republican Youth Forum «Men Zhastarga Senemіn» is the development of patriotism through the prism of innovation and creativity.

The Forum’s traditions has been originated since 2013 and are based on annual competitions for the best student innovative project «My Real Contribution to the Innovative Development of Kazakhstan», the best essays «What can I do for the prosperity of my country», the best poetic work and song on a patriotic theme.

The growing number of projects and creative works annually received by the organizing committee evidences relevance and popularity of the Forum. It has become a significant platform across the country aimed at developing patriotism, civic responsibility and the intellectual and creative potential of young people.

The Year of Youth gave a new impetus to the Forum and support for youth initiatives. New projects have been added to the competitions within the Forum in order to promote the principles of integrity in society, as well as creative ideas from representatives of working youth.

This year, the organizing committee received over 1,500 applications from students from more than 100 universities from all regions of the country. Among them are both individual projects and works, as well as the works of collective creativity. An independent jury from among authoritative experts - public figures, representatives of business, government agencies, the media, scientists, culture and art workers selected 620 best works, the authors of which were invited to the Forum.

On the first day of the Forum, competitive works were presented at the thematic sites and the main contenders for the victory were determined. The criteria by which selection was made were serious: non-standard solutions, creative approach, conceptualism and, most importantly, expected real benefits for people and the country as a whole. It is pleasant to note the high level and quality of the received innovative developments and creative works, which demonstrates the talent of the new generation of Kazakhstan.

Vice Prime Minister B.M. Saparbayev, Minister of Education and Science of the Republic of Kazakhstan A.K. Aymagambetov, Minister of Information and Public Development D.A. Abaev, First Deputy Chairman of the Anti-Corruption Agency of the Republic of Kazakhstan O.A.Bektenov, Deputy Akim of Almaty E.Zh.Babakumarov, Rector of KazNU Academician G.M. Mutanov, well-known public and government figures, students and working youth from all regions of the country will take part in the award ceremony.

Winners and prize-winners of competitions will be awarded with diplomas and valuable prizes. The first place winners will receive a grant for one year of free education at Al-Farabi KazNU. The creative works of the contestants will be published in a special collection.

Place and time of the event: Almaty, Al-Farabi KazNU, the U.Dzholdasbekov Students’ Palace, the opening of the exhibition of student innovative projects and the Forum is at 9.00 a.m.