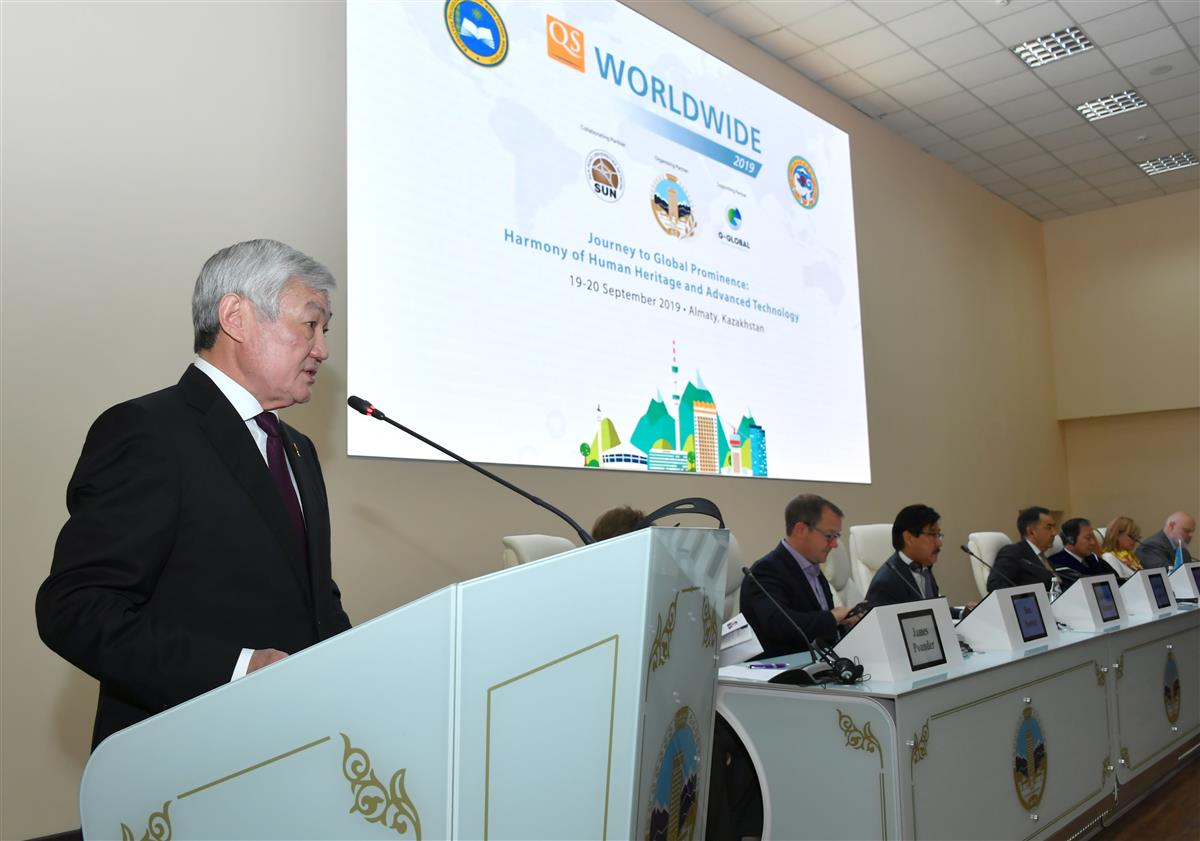 In Almaty, the leading University of the country - Al-Farabi KazNU hosts events of world significance, which are aimed at improving the competitiveness of domestic higher education and the export potential of educational services.

Berdibek Saparbayev has made a welcoming speech on behalf of the Head of Government Askar Mamin, which states that today the country is solving problems on the competitiveness of the education system, science, and the academic independence was provided to the Universities. «All these measures are aimed at enhancing the influence of Universities in the evolution of the scientific, educational, technological and humanitarian space. I hope that your advanced ideas, creative initiatives will be embodied and will contribute to the further development of human capital», - is said in the welcoming address of the Prime Minister.

As part of the Global University Summit, significant high-level events are held:

- The meeting of the General Assembly of the University Alliance of the Silk Road (SUN), uniting more than 130 Universities in the world;

- The Global Congress «The Role of Youth in the Implementation of Sustainable Development Goals – 2030», organized by the Foundation of the First President of the Republic of Kazakhstan - Elbasy, the International Secretariat «G-Global» and KazNU.

Over 800 leaders of the academic community - Presidents and Rectors of Universities, scientists and experts from more than 60 countries, attend them. Among which: representatives of the UN, UNESCO and other international organizations, world famous companies Microsoft, the Air Force, Elsevier, Springer Nature, YODAK, AKSON; Heads of Universities ranked in the top 800 international QS ranking «World University Rankings»; members of SUN, USRN, the international organization and university ranking association IREG Observatory; experts of the European accreditation network for engineering education ENAEE.

They will participate in the discussion and development of a new model for the future development of Universities in the framework of the integration of education, science, advanced technologies and spiritual values. The organizers are confident that the joint holding of events on one platform will give a synergistic effect in enhancing the role of universities in the formation of human capital and solving global problems.

It should be noted that for the first time in world practice several large international events are held simultaneously with such an authoritative composition of participants on the basis of one University. As noted in the QS World Wide Organizing Committee, this is due to the phenomenal breakthrough made by KazNU over the past seven years in world rankings, the increasing role of KazNU in the global scientific and educational space and the initiatives that are being implemented by the Kazakhstani University on an international scale.

Consistently pursuing a strategy of transformation into a research university, KazNU was the first of the Central Asian universities to take the 20th place among the best universities in the world in the international ranking of QS World University Rankings. Focusing on the goals of the «Rukhani Zhangiru» program, KazNU put forward for discussion by leaders of academic circles and famous scientists the theme «Journey to Global Prominence: Harmony of Human Heritage and Advanced Technology» which meets the strategic directions of the country's development and global educational trends. This Forum is a unique and the world's largest platform for the exchange and dissemination of best practices in the field of science and higher education.

The events will last three days, the Forum’s program is very rich - there will be held plenary meetings, panel discussions, business meetings and the signing of memorandums of cooperation as well as an exhibition of the achievements of leading foreign and domestic universities.