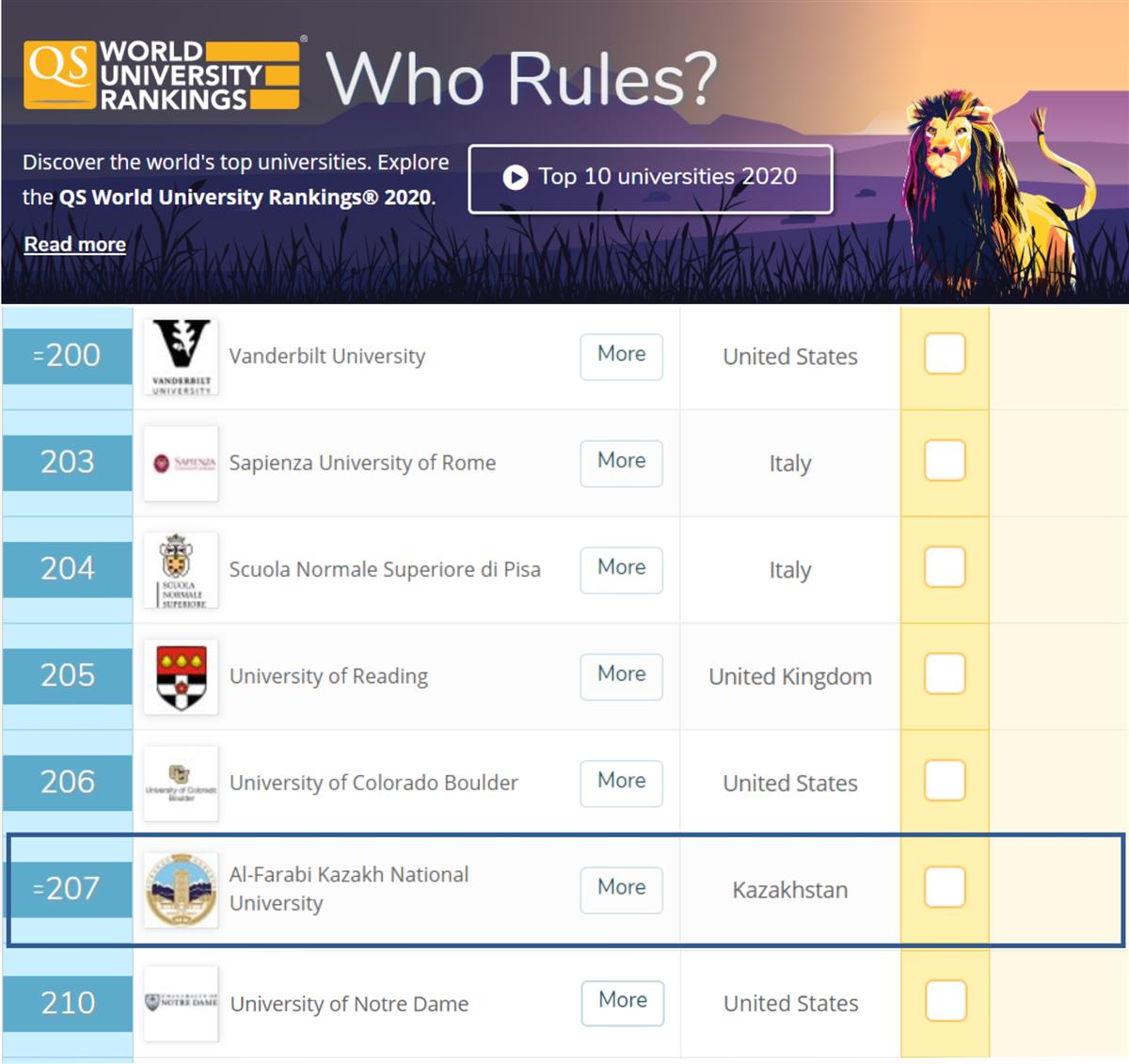 Al-Farabi KazNU is the only University in Central Asia to be listed in the top 210 among the world best HEIs by the international QS World University Rankings. Moving forward another 13 positions, it took the 207th place. Only two Universities in the post-Soviet space are included in this group - KazNU and Lomonosov Moscow State University (RF).

The QS is one of the most authoritative and influential international agency recognized by all countries, which for many years conducts a global ranking of the best institutions of higher education in the world. The first three places in the ranking are taken by Universities from the United States - Massachusetts Institute of Technology, Stanford and Harvard Universities, respectively.

KazNU as the leading University in the country is purposefully working on the implementation of an important state task set by the First President of the country - Elbasy Nursultan Nazarbayev - to enter the top 200 best HEIs in the world. Over the past five years, the University has advanced in the QS WUR rating to more than 400 positions. In world practice, no University has achieved such growth dynamics! According to recommendations of the QS experts, KazNU's experience is studied by leading Universities of the world. This indicator is convincing evidence of its high competitiveness in the global education and science market.

It should be noted that according to the results of the subject rating «QS WUR by Subject» KazNU was the first among the Universities of the CIS countries to enter the group of 51-100 best HEIs in the world. In total, this rating includes six specialties of a leading Kazakhstani University.

Taking into account the growing role of KazNU in the global scientific and educational space, the QS decided to hold an international forum in Kazakhstan. The world-level event «Towards Excellence Based on the Harmony of Human Heritage and Advanced Technologies» will be held on the basis of Al-Farabi KazNU in September 2019. This is an indicator of high global prestige, not only of the University, but also the entire system of higher education in Kazakhstan.

KazNU demonstrates strong momentum in other reputable international rankings. Thus, according to a study by the British Agency «Times Higher Education», KazNU first among the Universities of Central Asia entered the list of the best HEIs in the world. In the global ranking of the most environmentally friendly HEIs «UI Green Metric Ranking of World Universities», it took 172 place, in the European rating of the European Scientific and Industrial Chamber, it received an «AA» rating and ranked among the leading European HEIs. According to a study of the famous international organization «Great Value Colleges» (USA), the University took 31 place among the technologically advanced Universities in the world.

An important factor in the successful promotion of KazNU in the ratings was a large-scale structural modernization, high efficiency of results-based management and the intensive development of a unique infrastructure, which over the past five years has grown by almost 50%.

The global recognition of the University is associated with expansion of international cooperation and the development of internationalization, as well as with an active work of KazNU as the Global Hub of the UN «Academic Impact» Program on Sustainable Development.