The meeting was devoted to the discussion of the theme “South Asia in the Middle Ages”, according to the club’s plan. Scientific reports on this topic were made by club members, 2nd year students - Askarova Botagoz and Tolymbek Kazez. Other members of the club participated in the discussion of reports and expressed their opinions, made critical comments on the reports. At the end of the meeting, the head of the club, Ph.D., associate professor Kartabaeva E.T. made general conclusions on the problem, and showed the strengths and weaknesses of the reports made. At the same time, students were given advice on developing a presentation on this topic. 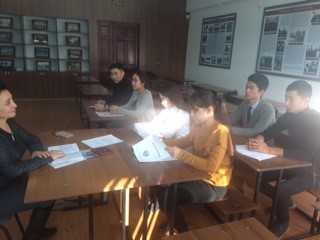