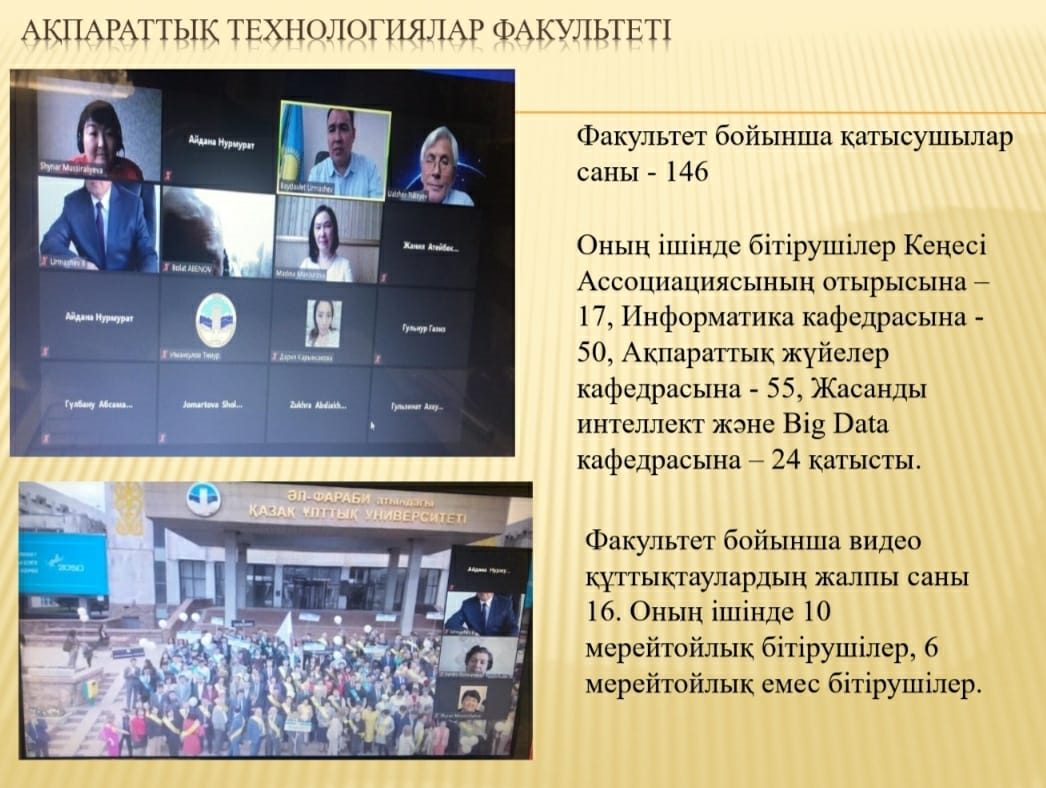 On May 30, 2020, the Council of the Alumni Association was held at the Faculty of Information Technology. Also at the departments: “Information Systems”, “Informatics”, “Artificial Intelligence and Big Data” celebrated “KazNU Graduates Day” dedicated to the 1150th anniversary of Abu Nasr al-Farabi. This year the event was held in a non-traditional online format on the Zoom platform.

During all the meetings, a solemn speech was presented by the rector of the University of KazNU named after al-Farabi Mutanov Galimkair, as well as the participants listened to the congratulation of the Chairman of the Constitutional Council of the Republic of Kazakhstan, the President of the Alumni Association of KazNU named after Al-Farabi, Doctor of Law, Professor Kairat Abdrazakula Mami.

At the Council of the Alumni Association, the Dean made a presentation on the gradual development of the faculty. Participants were presented with new ideas by alumni to develop science, to pay attention to the study of new projects that can be used at the international level, exchanging experiences with other countries. Together with the participants, with great enthusiasm, they considered a mentoring project whose purpose is to unite current students with graduates through mutual cooperation, friendship and access to valuable advice.

Video greetings were received from graduates of different years of release. The total number of video congratulations received by the faculty is 16. Of these, 10 are anniversary, 6 are not anniversary. On this day, the department of information systems delivered a congratulatory speech to 20 anniversary graduates of different years with wishes and memories of the Native University. And the department of information systems received 6 video messages. Of which, with the video congratulation of the native university and with student memories of leading scientists, the deputy director of the Bologna process and academic mobility center of the Ministry of Education and Science of the Republic of Kazakhstan, Dzharasova G., a 1995 graduate. And a congratulatory video was sent by an outstanding graduate of the department Rustemov Bauyrzhan, with gratitude and the wish of worthy heights to his native Alma Mater.

The Department of Artificial Intelligence and Big Data received 6 video messages with congratulations and wishes for all graduates of the University. Since this department is still young, and history is rich in jubilee issues, it was not. Received a video message from a 2016 graduate, Ateybekova Zhaniya Bakhytzhanovna working for Channel 31 of the Broadcasting Company, the position is the chief media analytics and 5 video message with the best wishes from graduates of past years.

At the Association’s council, the outcome of the conference was summarized by the Dean of the Faculty of Information Technologies B. Urmashev At the departments, the activities were completed by the heads of their departments.

The meetings were organized without technical problems. All graduates congratulated each other online, shared their experience and advice, and so quickly and quietly the event came to an end.

After the final word on the Council of the Alumni Association and at the departments, we completed the meeting on a positive note with the clip “Armandastar”.

Structure of the faculty