Dear first-year students!
As you know, the education process is remote in the fall semester.

In this regard, we invite you to meet with the dean, where you will receive information about the organization of the educational process online, as well as you can get direct answers to your questions.
Platform: Zoom 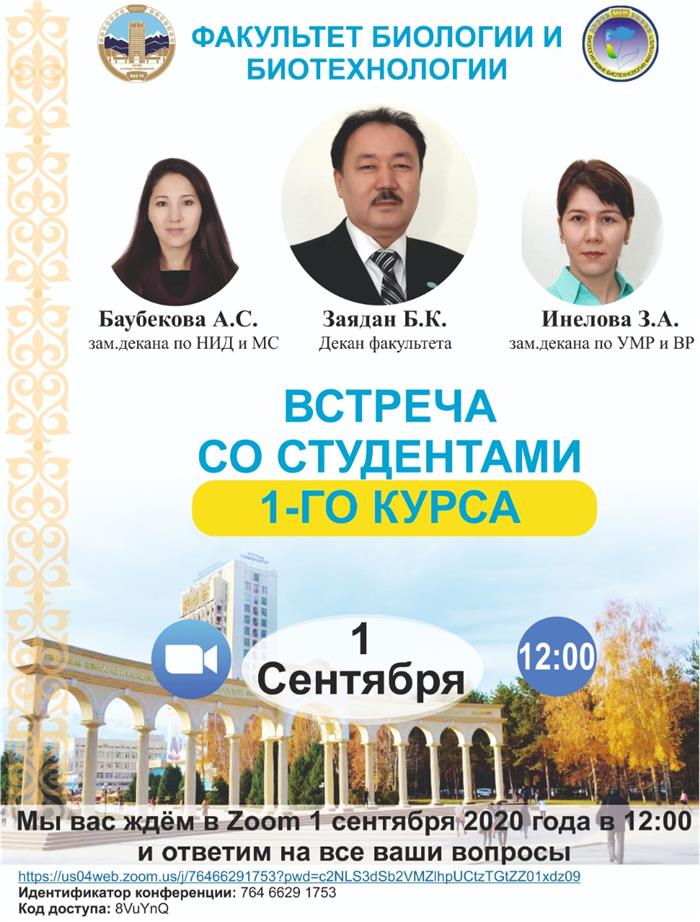 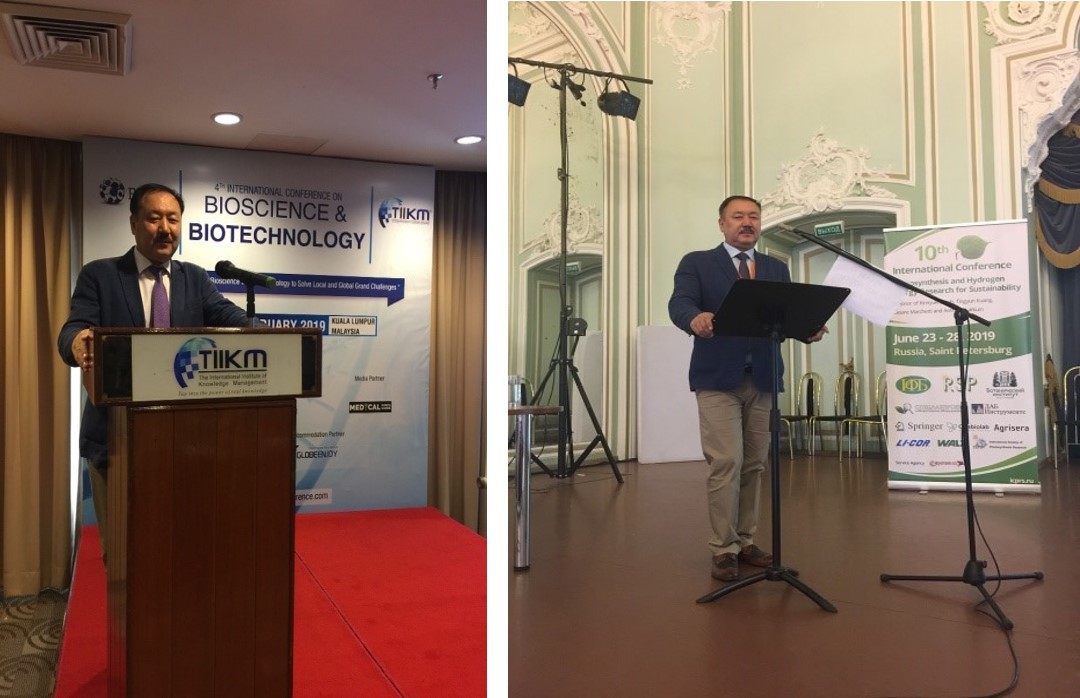 We sincerely congratulate our teacher and dean of the faculty of biology and biotechnology, doctor of biological Sciences, Professor Zayadan Bolatkhan Kazykhanuly on his election as an academician of the National Academy of Sciences of the Republic of Kazakhstan!

Your election as an academician of the National Academy of Sciences of our Republic was a recognition of your great achievements in scientific activity, a worthy assessment of the significant contribution to the development of scientific problems contained in your works, and was a confirmation of your high authority in Kazakhstan science!

We are confident that your knowledge and experience will continue to develop photobiotechnology and bioenergy in our Republic. We wish you, dear Bolatkhan Kazykhanuly, good health, new successes in research, good luck in your aspirations and implementation of your plans for the benefit of science in Kazakhstan!

For the first time in Kazakhstan B. K. Zayadan created a new scientific school in the field of "Phototrophic microorganisms, their application in biotechnology and bioenergy", which function on the basis of the laboratory of Photobiotechnology of biology and biotechnology problems Research Institute of of al-Farabi Kazakh national University. At this laboratory, he managed 17 research projects funded by the Ministry of education and science of the Republic of Kazakhstan, dedicated to the biology and biotechnology of microalgae and cyanobacteria. The main research areas of his scientific school are related to the search and study of promising cultures of phototrophic microorganisms of important biotechnological significance, in particular for the production of biologically active substances (BAS) in medicine and biologically active additives (BAA) for agriculture, the production of biofuels and biofertilizers, biomonitoring and bioremediation of deteriorated environmental objects.

In 2017, B. K. Zayadan participated in the international specialized exhibition EXPO - 2017 with the project "Mass cultivation and monitoring of microalgae in photobioreactors for biodiesel production".

B. K. Zayadan devotes a lot of time and effort to training highly qualified specialists. Under his guidance, 6 candidate and 8 PhD theses were defended.

B. K. Zayadan is the author of about 20 patents and more than 400 publications in the far and near abroad and in Kazakhstan, including 15 books and 5 monographs, and more than 70 publications published in such international, highly rated journals as: International Journal of Hydrogen Energy, Journal of Biotechnology, Genome Announcements, FEMS Microbiology Letters, Photosynthesis Research, Russia njournal of Plant physiology, Microbiology, Applied Microbiology and Biotechnology.

For success in pedagogical, scientific and social activities, Professor B.K. Zayadan was twice awarded the title "Best Teacher of the Higher Education of the Republic of Kazakhstan" (2008, 2018), holder of the state scientific scholarship for scientists who contributed to the development of science and technology of the Republic of Kazakhstan - 2014.

In 2016 he was awarded the badge “I.Altynsarin » of the MES RK for achievements in pedagogical activity.

In 2017, according to the Web of Science Core Collection, he was awarded a diploma of the Ministry of Education and Science of the Republic of Kazakhstan for high citation among Kazakhstani scientists in the field of "Green Energy" from 2012 to 2016.

In 2017, he was awarded a certificate for high rates of publication activity in Springer Nature journal.

In 2019, awarded the Scopus Award-2019 in the nomination “Top researcher in Engineering and technologies”.

In 2019, he was awarded the medal of KazNU named after al-Farabi "Yeren enbegi ushyn". 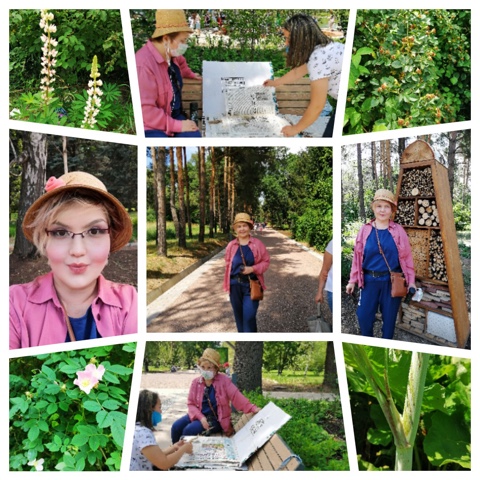 Our Botanical garden is the pride of the botanical science of Kazakhstan!

Today, on June 15, the Main Botanical garden of Almaty was opened to the public after restoration. How many citizens came to support and thank the botanists of the Institute of botany and phytointroduction of the MES RK! It is felt that our colleagues have put all their heart into this matter. Our Botanical garden is the pride of the botanical science of Kazakhstan. We are well aware of many expositions! These are expositions: «Medicinal plants», «Rare and endangered plants», «Dendrology of the north and south America», «East Asia», greenhouse, etc. Well-known scientists, florists and resource specialists, dendrologists and phytopathologists work in the garden. Colleagues, the botanists of al-Farabi KazNU congratulate you on this event.

In the Botanical garden there is a rich material for theses and master's theses. In the shade of the majestic trees, I was able to check out my student's herbarium, which was collected this spring. At this time, we were approached by adult citizens and watched our work with interest. We were asked to give an interview by journalists and a bloggers of «Khabar». The day was very rich and memorable! 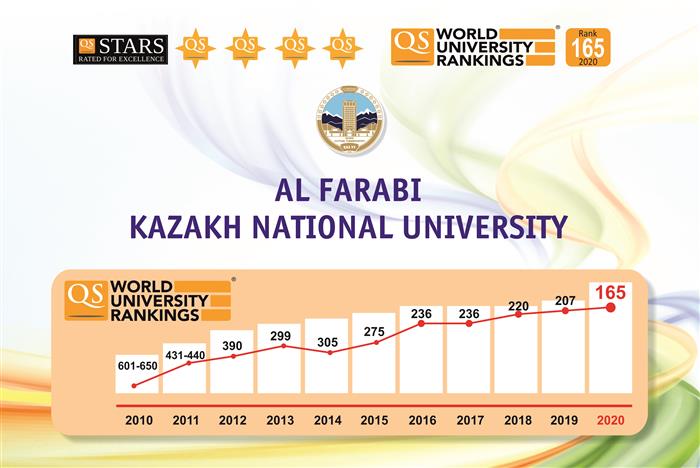 Al-Farabi KazNU ranks 165 among the best universities in the world!!!

Just recently, the result of the rating of the best Universities in the world according to QS WORLD UNIVERSITY RANKING was published. al-Farabi KazNU entered the top 200 and took the 165th place.

It was not easy to achieve this result. After all, under the guidance of doctor of technical Sciences, Professor and member of the world Academy of Arts and Science (the World Academy of Art and Science), academician Of the national Academy of Sciences of the Republic of Kazakhstan. Mutanova Galimkair Mutanovicha the whole team and management worked on implementing new approaches and solving problems to achieve new results. The team of al-Farabi KazNU has developed its own methodology: use of new approaches-introduction of an effective system-take into account non-credits and disadvantages - identify and solve problems - achieve high results. The result was not long in coming. Now we are all proud of our common team victory!proud of our common team victory! 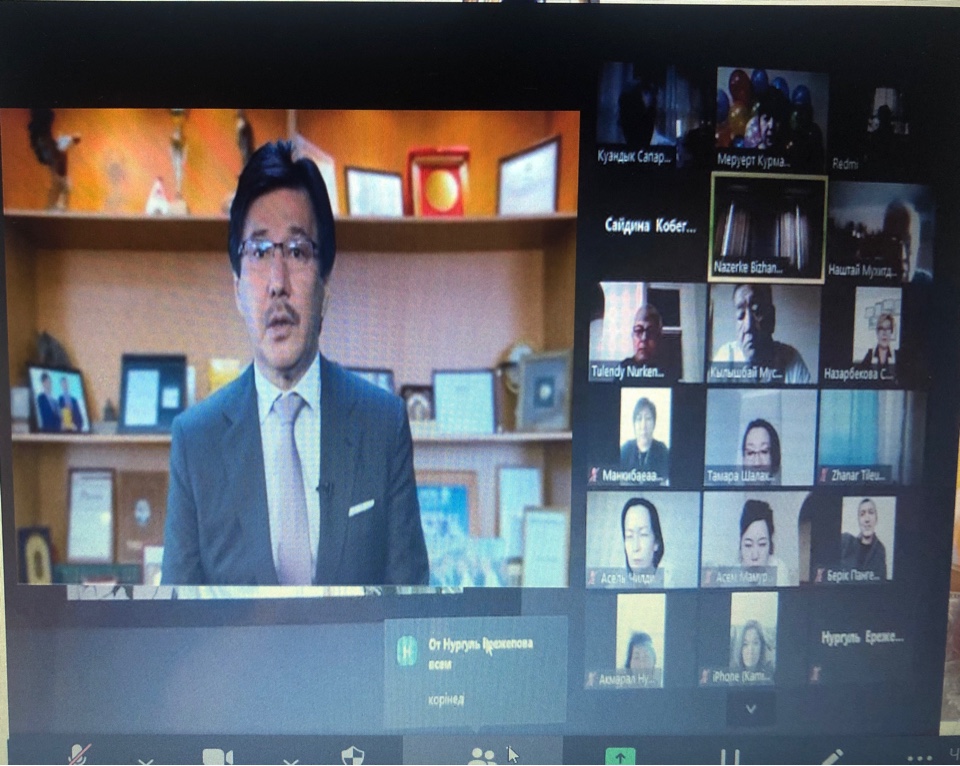 The first ever ONLINE event dedicated to the Alumni Day of al-Farabi KazNU!

In connection with the ongoing quarantine against the COVID-19 pandemic, the Department of Biodiversity and Bioresources in remote format held KazNU Alumni Day, dedicated to the 1150th anniversary of Abu Nasr al-Farabi.

The online event was attended by approximately 40 people, including graduates of the department and faculty of biology and biotechnology.

Dean of the faculty, Doctor of Biological Sciences, Professor Zayadan B.K. personally congratulated all university graduates present at the event. The Dean noted that the professors of the department are the pride of our university and called for continued development of the Department of Biodiversity and Bioresources.

Event moderator and head of the Department of Biodiversity and Bioresources, Doctor of Biological Sciences Kurmanbayeva M.S. also expressed her congratulations and wished future graduates of the department all the best. Later, participants listened to the university’s anthem and congratulations from the rector of KazNU, Doctor of Technical Sciences, Professor Mutanov G.M. and from the Chairman of the Constitutional Council of the Republic of Kazakhstan, the President of the Alumni Association of KazNU, Doctor of Law, Professor Mami K.A. During the event, participants watched the video “KazNU: University, directed to the future”, dedicated to the achievements of our university and vision of the future.

In the main part, a video was shown with the achievements of the department – Smart Green House, winter garden at the Zholdasbekov Palace of Students, “Aquaponics” (artificial pond on the territory of the university), SRC “Center for the cultivation of ornamental species of fish and plants”, landscape and other works carried out by the department. The video continued with speeches by prominent and promising graduates of the faculty and department. First of all, Dr. Biol.Sc. Shalakhmetova Tamara Minazhevna, Corresponding Member of the IAS VS, spoke and reminisced on the past and showed great expectations for the bright future of the university and its students. Next, Director of the Industrial Trout Farm of MG LLP Tursynuli Marlen made a speech, followed by the Head of the bioengineering laboratory of Nazarbayev University – Askarova Sholpan participating from the capital city of Nursultan. A doctoral candidate and holder of a grant from the World Bank Nurkenov Tulendi, who is currently undergoing a one-year internship at the University of Ilinois, United States of America, made a presentation from abroad. The video clip was completed with a speech by a doctoral student of the department, a grant recipient from Rufford Small Grants and young zoologist-enthusiast Bizhanova Nazerke.

The final part of the online event was made by distinguished graduates of the faculty: Mukhitdinov N.M., Saparov K.A., Nurtazin S.T., Musabekov K.S., Shalakhmetova T.M. Skakova R. T. – Deputy Dean of the Dosmukhamedov School of Public Health at Asfendiyarov KazNMU, and Nurkenov T., who participated despite the difference in time between USA and Kazakhstan.

The organizers of the largest online event of the department were: Head of the Department Kurmanbayeva M.S. (moderator), Senior Lecturer Mankibayeva S.A. (Main organizer), tutor and doctoral student Bizhanova N. (Video cameraman), tutors Zorbekova A., Tleshova M. and specialist Pangereyev B. (organizers). The postgraduate student B. Berdikulov, as well as the tutors A. Zorbekova and M. Tleshova worked on editing and creating a video with the speeches of graduates. 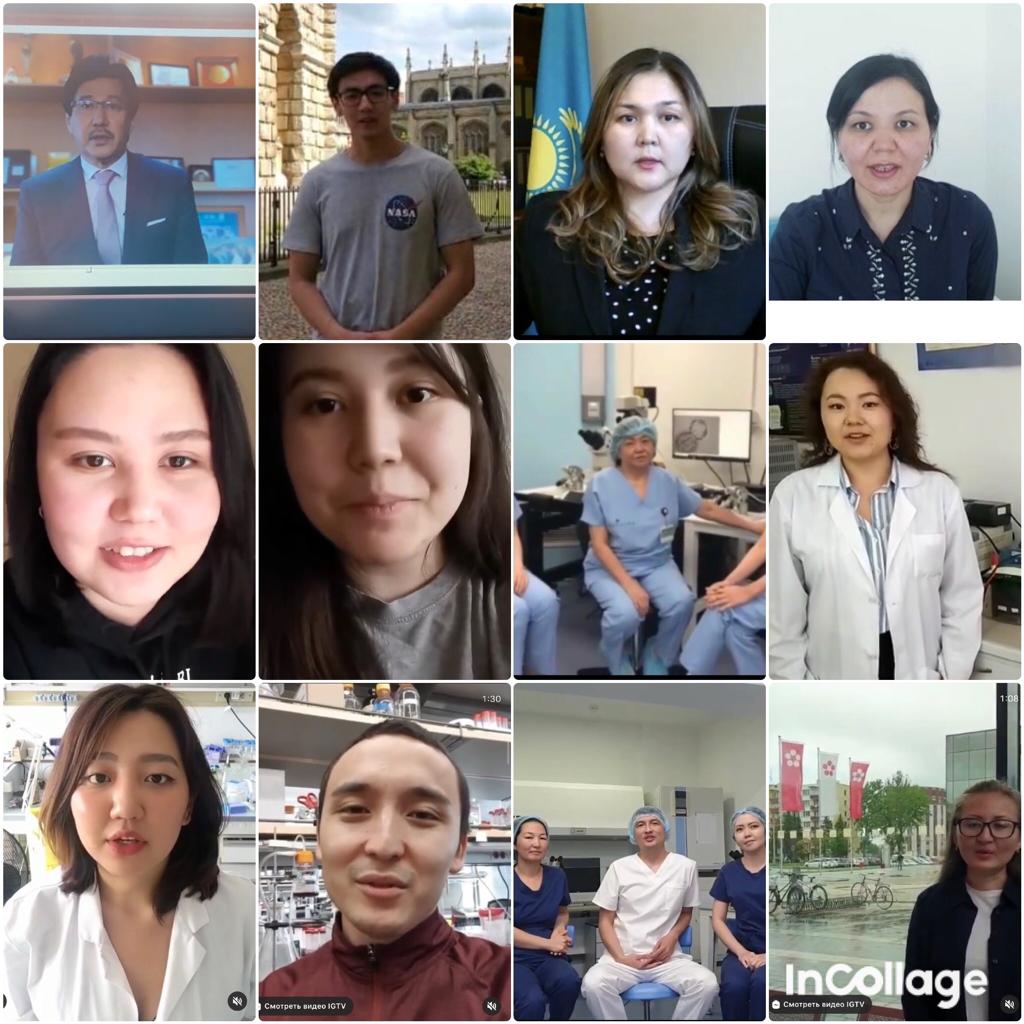 Alumni Day dedicated to the 1150th anniversary of al-Farabi

Day of Graduation dedicated to the 1150th anniversary of al-Farabi

Despite the fact that the annual festive event was held this year in an online format, our graduates expressed their good wishes to each other, shared tips with the young generation, gave instructions and had a great time.

At the end of the event, all participants together performed the song "Armandastar". 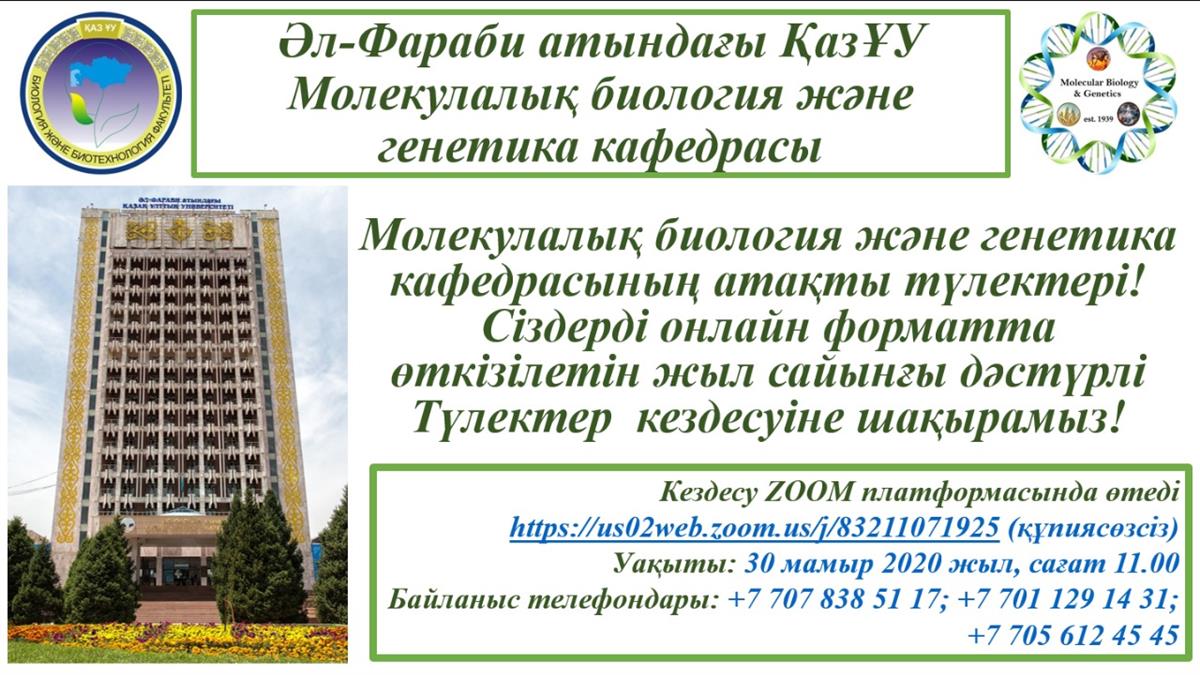 We are inviting you to an online alumni meeting. 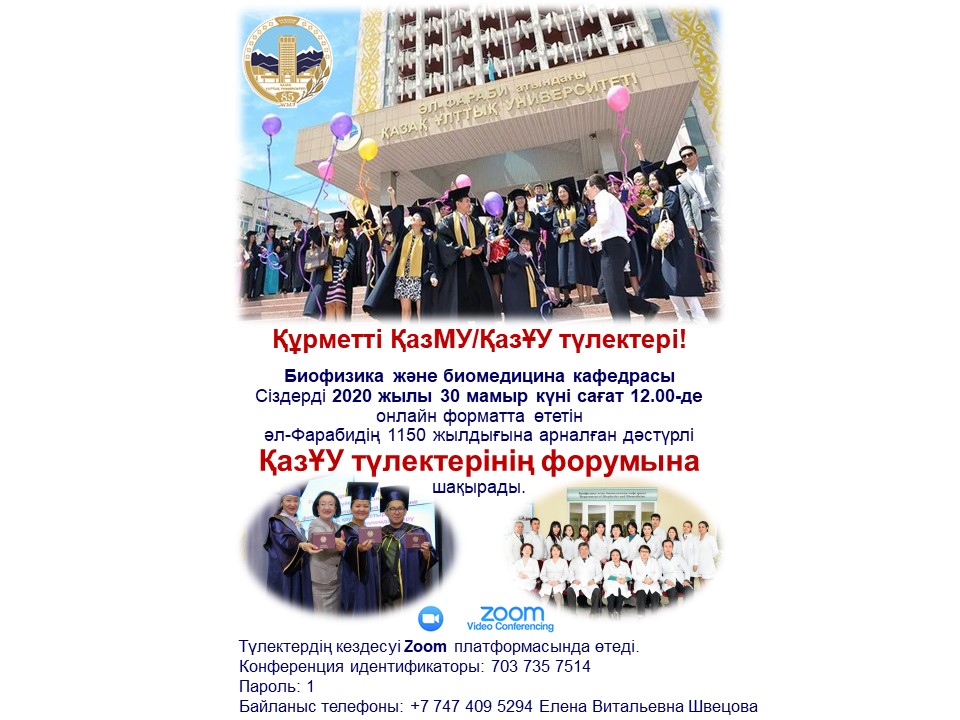 The Department of Biophysics and Biomedicine invites You on May 30, 2020 at 12:00 p.m. to participate in online Alumni Forum at KazNU dedicated to the 1150th anniversary of al-Farabi.

The meeting is held online on the Zoom platform. 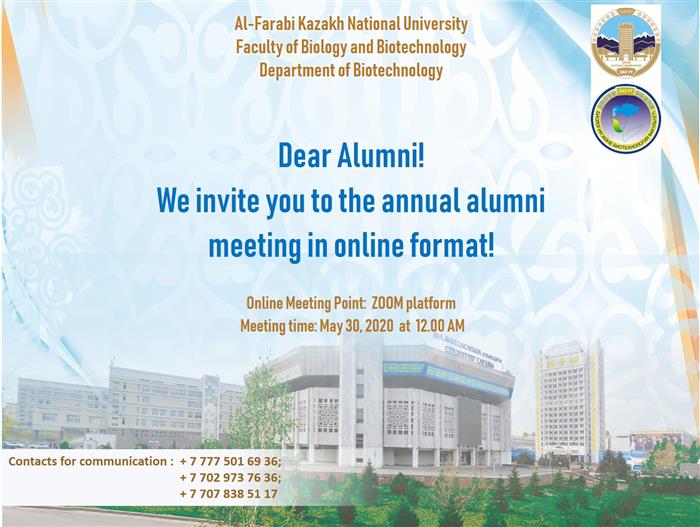 Faculty of Biology and Biotechnology

Achievements of the faculty

PUBLICATION OF EDUCATIONAL AND SCIENTIFIC MATERIALS, PRESENTATIONS IN PDF FORMAT ON WEB RESOURCES of KazNU