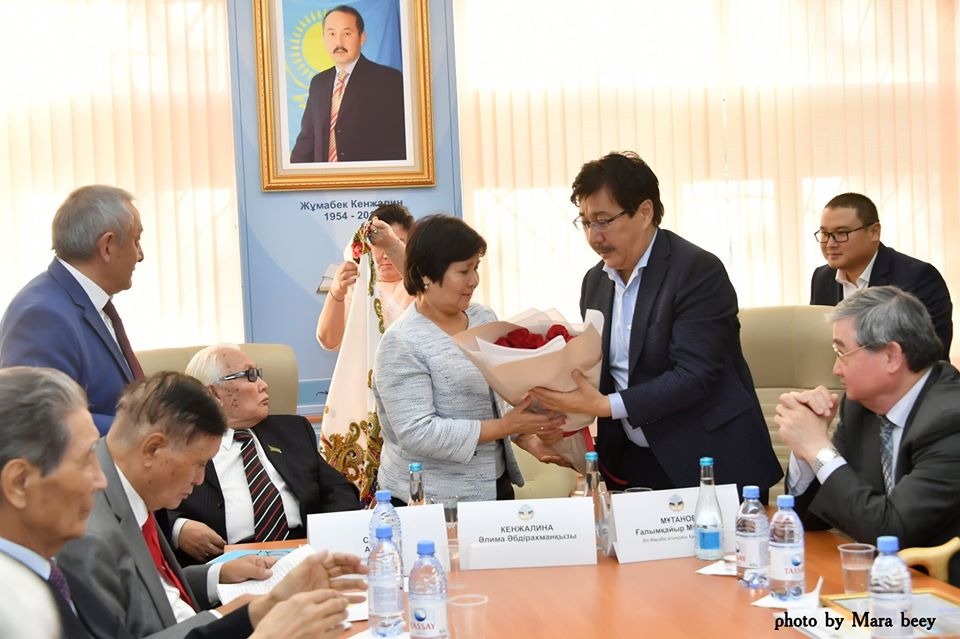 The name of Zhumabek Kenzhalin, a well-known writer, expert journalist, and teacher of our University, who has been a long-time leader in the country’s foreign media, is widely known to future journalists. The meeting on the 85th anniversary of Al-Farabi KazNU and the Faculty of Journalism was devoted to theme «Zhumabek Kenzhalin-Journalist. Scientist. Figure».

The portrait exhibition «Generations of Nation Teachers Not Forgeted» was presented at the educational and leisure area of the students «Graduates - Our Pride» and continued with a solemn opening of Zhumabek Kenzhalin’s «Press and New Media» educational and creative laboratory. The Laboratory is one of the informative audience equipped with up-to-date equipment, it provides not only information regarding the activities of Zhumabek Kenzhalin, his way from his birth up to the end of his life, valuable books, heritage, «Kazakh literature», «Akikat», and «Ana tili», but also gives opportunity for future journalists to gain experience and exchange information.

Zhumabek Kenzhalin was the first journalist in the field of journalism to become an ordinary journalist in the newspaper «Yegemen Kazakhstan» and he reached to the editorial position. In 1986-1988 he worked as Executive Secretary, Acting Chief Editor in «Zerde» («Education and Labor») magazine, Chief Editor of «People’s Council» newspaper in 1994-1996, Chief Editor of «Akikat» magazine in 1996, the Editor-in-Chief of the «Literature» newspaper. He worked in the field of information until the end of his life, and in 2009-2017 he headed «Kazakh newspapers» company, made great efforts to the publication of 6 journals in the company. He greatly assisted in keeping the staff structure of the newspaper or magazine editorial, preventing the departure of the «KazPost» non-profit organizations, increasing the printing industry system, increasing the circulation of newspapers and magazines. He is the author of the following books - «Zhelkildep osken kuraktai», «Shyndykti shyrak etip ustaniz», «Ult rukhin uliktagan urpakpiz», «Sayasi menedzhment zhane baspasosding zhurtshilikpen bailanis», «Er Zhauke minbegenmen altin takka», «Kalam kanaty», «Elzhandilik mirati zhane baspasos bedeli».

Zhumabek Kenzhalin’s laboratory will certainly play an important role in training qualified journalists. It is evident that the «Saken of Today» will never die, since we have journalists and descendants who study Zhumabek Aga’s rich heritage and continue his good path.