n his Address to the Nation, President of the Republic of Kazakhstan - Nursultan Nazarbayev, about the topic of global imbalances, including the state of the Kazakh people in the face of the global economic crisis that rocked the security and internal stability, as well as along with the need to maintain a stable level of blagostostoyaniya to resolve the causes of and overcoming the consequences of the crisis.
On this issue, the head of state: "I would especially like to say about the agricultural sector, through the development of which we simultaneously solve two major problems for the country - to ensure food security and export diversification," he said. In fact, the development of any country is directly related to issues of food security of the population level. Today intensively implemented industrial and innovative projects in our country. It is known that the agricultural sector of the economy has a huge range of tasks and goals. It is no secret that in this regard, Kazakhstan is the question of food security and its decisions, as well as the great importance of implementing innovation agro-industrial complex with the priorities and capacities in the abovementioned area. At the same time, we recall that the university rector, academician of NAS RK, Doctor of Technical Sciences, Professor Galymkair Mutanov believes that a new period of industrial-innovative development of the five-year program to Kazakhstan universities are major tasks for the modernization, so today in the universities should pay special attention the development of science and iinovatsiyam. On Agrobiostantsii Kazakh National University. Al-Farabi Kazakh National University students have practice and are made in the field of scientific and innovative work in agriculture. In this respect, research and production center with a total area is 10 hectares, are Agrobioekologicheskaya laboratory station, natural gas supply and storage for agricultural products and equipment as well as studio works. Also in the complex are parking, educational praktichski body and the hostel has 50 beds. In the near future we are opening in the complex Algobiotehnologicheskoy laboratory under the supervision of Doctor of Biological Sciences, Professor Zajadan Bolatkhan. Recall that in this laborotorii get the biomass of microalgae, which are then used in the production sectors, in particular sectors such as the production of cosmetic products and bakery products, transportation products, biodiesel, bioethanol, in dietary supplements in the plant is planned to be used as plant hormones . Today, Agricultutal involved in teaching and innovative direction of the Faculty of Biology and Biotechnology, Geography and Environmental Sciences, Chemistry and Chemical Technology and the Faculty of Physics and Technology, in addition to this work Scientific research institutes. 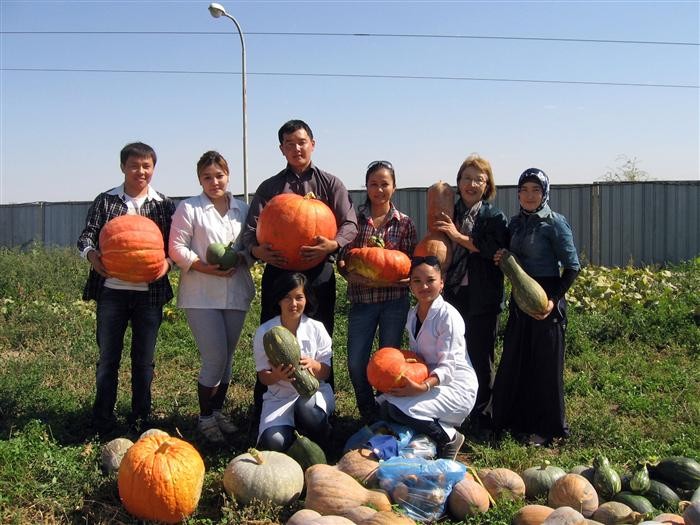 This year for the first time in the territory Agrobiostantsii landed on an area of ​​about 4 hectares of special varieties of wheat, over an area of ​​3 hectares of food and decorative pumpkin, melon, watermelon, potatoes, carrots, onions, sugar beet, tomato, cucumber, bell pepper, cabbage, maize, sorghum and dill. And brought under control irrigation systems and farming practices. In the future, it plans to open a trout farm, aquaponics and aquariums for students and undergraduates of the Faculty of Biology and Biotechnology, specialty «Fish economy and industrial fishing" in order to increase the level of knowledge and skills.

Recently Agrobiostantsii KazNU. Al-Farabi was held a business meeting akim of Almaty region Amandyk Batalov representatives of the Heads of National univesriteta, as well as representatives of the South Korean Dongguk University. During the meeting, the main theme of the issue served as the application of new methods of hydroponics in planting potatoes and strawberries. In turn, South Korean scientists have noted the need for potato cultivation methods and strawberries in a culture medium, whereby it will be possible to obtain a large number of virus-free products. The technology for production of the aforementioned objects is made up of an electron LED lamps, consisting of vermiculite and kakosovyh fibers, man-created solid ground, knitted chisel and water heating systems. Center for Education and Science of KazNU. Al-Farabi today implements a number of innovative projects on the scale of the Almaty region. It is worth noting that in the future we plan to develop ideas at the national level with the help of university activity. Therefore, we believe that is considered one of the great scientific and production centers - Agricultutal has a significant contribution to the cause.