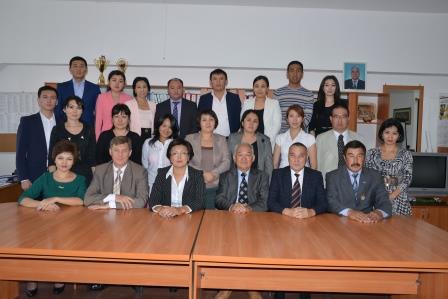 In 80-90 years, the Department moved to a new level of development. Since 1977, Department of Natural Resources and Environmental Law of the Kazakh State University was headed by Honored lawyer of the Kazakh SSR, laureate of the CH. Ualikhanov prize in the field of social and geographical sciences, outstanding worker of higher education, Doctor of Law, Professor Sagyndyk Baisalovich Baisalov. For about 15 years, an inquisitive scientist was developing an important and relevant scientific topic for the Republic: “Legal regulation of water jural relations”. He actually laid the foundations of Water law in Kazakhstan, and in 1966 he published his fundamental work “Water law of the Kazakh SSR.” This book can be found not only in all libraries of the CIS, but also in the libraries of the US State Department, the Gellen Institute in Germany, at the Sorbonne University in France. He published about 300 works, monographs, scientific articles and textbooks. The research of S.B. Baisalov is distinguished by fundamental, principled, erudition, broad legal culture, so that he received universal recognition as a legal scholar not only among scientists and practitioners of Kazakhstan, but also in the near and far abroad. Under his scientific leadership, the Department was actively involved in the development of the basic environmental and agricultural laws of the Kazakh SSR. For example, projects on Land, Water and Forest Codes, laws “On the priority of the development of auls, villages and agrarian businesses", “On land reform”, “On land tax” and many others. The end of the 90-ies and the beginning of the new century are characterized by a new rise in the creativeness of the Department. Since the end of 90-ies, it was renamed as Department of Natural Resources and Environmental Law. After untimely death of Baisalov S.B. a new head of the department was Professor, Doctor of Law Baideldinov D.L.

After graduating with honors from the Law Faculty of S.M. Kirov KazSU in 1982, Baideldinov Daulet Laikovich remained within the walls of his Alma mater at Department of Agricultural and Environmental Law. Combining teaching and research activities in his career, he remains faithful to the study of the chosen branch of law so far. In his official biography, only there are a few positions: from 1982 to 1996 D.L. Baideldinov was the lecturer of Department of Environmental Law of KazGU. From 1996 to 1988 he was the employee of the Security Council of the Presidential Administration. Then for several years he headed Department of Natural Resources and Environmental Law of KazNU, since 2002 he is the Dean of the Faculty of Law of KazNU. He was awarded with awards for merits in development of education, science and active social activity. During this period, lecturers of the Department actively participate in the development of legislation regulations in the field of land, environment, natural resources and agricultural law of independent Kazakhstan. Particularly it must be noted the participation of scientists of the Department in the development of the Concept of Environmental Safety of Kazakhstan, which covers all areas of environmental activities.

From the end of 2002 the Department was headed by Doctor of Law, Professor Erkinbaeva Lyazzat Kalymbekovna. This period is marked by the fact that new technologies and teaching methods were actively introducing in the educational process. Actualization of problems of land and agrarian legislation required training functional specialists, for this purpose, the list of read disciplines was reviewed and ties with production were improved. Introduction of the new system of education demanded from staff serious changes: introduction of distance education, working out new educational-methodical complexes on important sectors of the Kazakh law, re-interpreting and creating a new curriculum on specialty "Jurisprudence".

Department of Investment and Financial Law of Al-Farabi KazNU was established as a legal successor of Department of Soviet Law in 1998. The initiator and the first head of the Department was an outstanding lawyer of Kazakhstan, Doctor of Law, Academician of the Academy of Social Sciences of the Republic of Kazakhstan Nazhmetdin Baukeevich Mukhitdinov. N.B. Mukhitdinov is the founder of Mining law of Kazakhstan, the author of more than 100 scientific works of which more than 30 are the gold fund of Kazakhstan legal science. He was widely known in the countries of near and far abroad, was a member of the UN Environmental Commission. At the beginnings of the formation of this Department were such famous scientists as Professor Shaybekov K.A., G.G. Dospulov, T.T. Kulteleeva, Khudyakov A.I., Moroz S.P, etc. In addition to teaching basic financial and legal disciplines of the Department for the first time in the post-Soviet space, in the educational process new subjects appeared, such as "Investment law", "Mountain law", "Legal framework for investments in the subsoil use sector". That laid down in the future the opening of new specialties at the faculty. Lecturers of the Department were involved by the Parliament of the Republic of Kazakhstan for the development of investment, banking and tax legislation. Many lecturers were invited to work in the state bodies and protect the interests of Kazakhstan in the financial sphere. Under their leadership, leading research institutes and enterprises in the field of tax, financial and banking sector of the economy were created. In total, with the participation of lecturers of the Department more than 20 laws and units of substatutory elements of laws were developed, among which should be highlighted the Code of the Republic of Kazakhstan on taxes and other mandatory payments to the budget, the Code of administrative offences, the Budget Code, etc. The first head of the joint Department was Candidate of Law, Associate Professor Lapteva N.G. Currently, the Department has 8 Doctors of Law, 12 Candidates of Law, 4 Doctors of PhD. Academic degree rate is 60%.

Modern directions of the development of Department of Customs, Financial and Environmental Law of al-Farabi KazNU.

EMPLOYERS AND PARTNERS OF THE DEPARTMENT