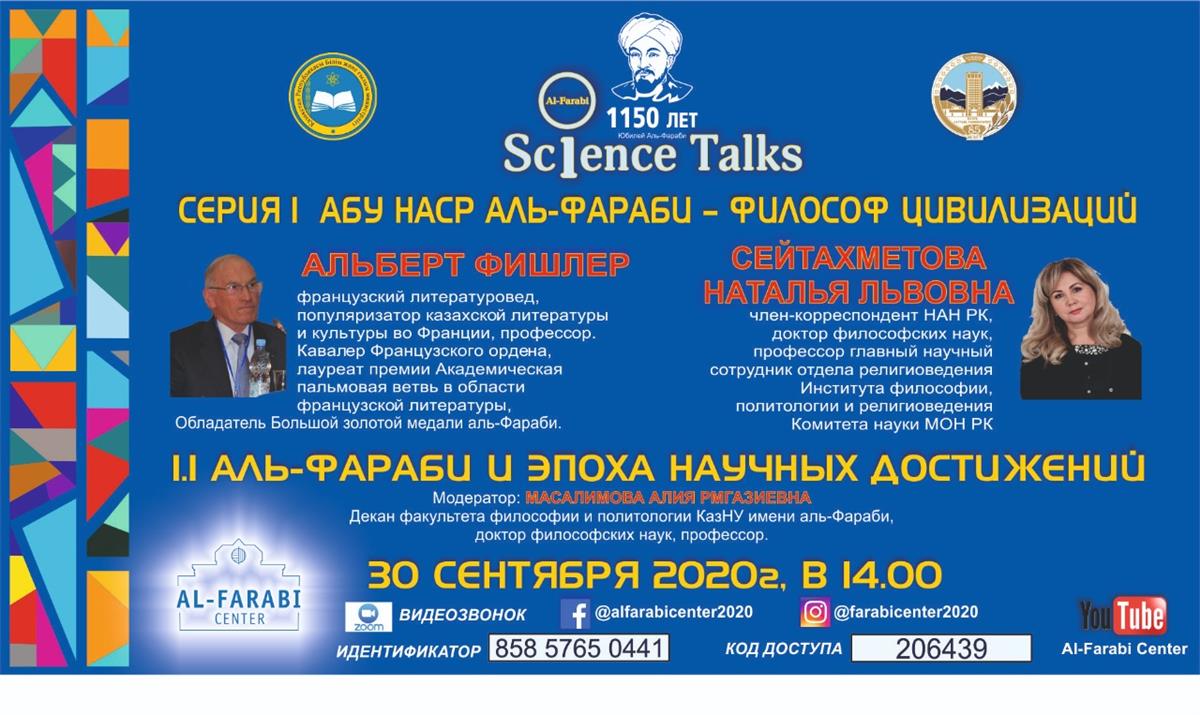 Al-Farabi Centre at KazNU, under the support of the Ministry of Education and Science of the Republic of Kazakhstan, is conducting a series of online events in the format of «Science Talks» dedicated to the 1150th anniversary of the great thinker, to reflect on his creative heritage and its significance for our contemporaries, as well as on the current problems of science development.

The «Al-Farabi Science Talks» will bring together well-known foreign and domestic scientists and farabiologists. In the framework of the project, which will take place in the period from September 30 to November 30 this year, there will be held a series of webinars on topics: «Abu Nasr Al-Farabi – the Philosopher of Civilization», «Kazakhstani Science: From Foundations to Modernity», «Intercultural Dialogue and Mutual Understanding», «Ethics, Duty and Responsibility», «Science as a Driver for Sustainable Social and Economic Development», «Humanism and Respect for the Individual», and «Science, High Technology and Industry 4.0».

The Project will be launched on 30 September 2020 at 14.00 p.m. (Nur-Sultan time) with the opening of the international online webinar «Abu Nasr Al-Farabi – the Philosopher of Civilization». The meeting will be attended by a well-known literary critic of France, Professor Albert Fischler, and Corresponding Member of the NAS RK, Doctor of Philosophy, Associate Professor of the Institute of Philosophy, Political Science and Religious Studies of the Committee of Science of the MES RK Natalia Seitakhmetova. The online event will be moderated by Professor Aliya Masalimova, Dean of the Faculty of Philosophy and Political Science of KazNU.