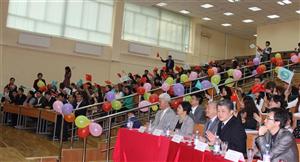 On September 24, 2014 at the Department of Sinology of the Faculty of Oriental Studies a festive evening dedicated to the 65th anniversary of the founding of the PRC and the 10th anniversary of the opening of the Confucius Institute was held. Students of the Department of Sinology have shown their art, giving a lovely evening for their guests.
Guests of festive evening:
• First Vice-Rector of KazNU named after al-Farabi Mr. Burkitbayev M.M .
• Rector of the University Lanzhou Mr. Wang Chyn
• Deputy Consul of General Consulate of China in Almaty, Mr. Dyn Sian Lin
• Vice-Consul of the Consulate General of China in Almaty on Educational and Cultural Affairs, Mr. Gao Cheng.